“Wow – look at the lake. What if the race had been today?” We’d just come out of Calypso’s Coffee, early on post-race Monday after my 10th Ironman® in Coeur ‘Alene, and Cheryl was reveling in the clear skies and warm gentle breeze blowing across the water.

“Yeah, no chop or whitecaps all right. But then it wouldn’t have been nearly so epic, now would it?” I mused, sipping on my hot chocolate.

We were headed to the bandshell in the park for the morning’s award ceremony and Kona sign up festivities. Some folks near us were shuffling, or limping a bit with stiffened thighs. All I had to worry about were the black toenails peeking out from my Birkenstock sandals. I felt I’d cheated the race a bit, not having worked hard enough to ruin my quads for the next week.

Though the Village was still telling and selling, bike racks and transition tents were in the early stages of load-out. This year, food and awards are set up in the clearing in front of the stage, with a few actual tables and chairs in the sun. We headed to the nearest seating. 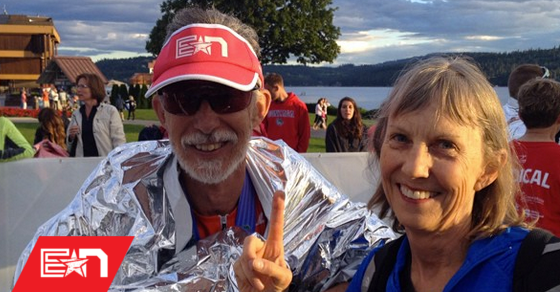 I looked up and noticed Richard Weinbrandt there with his fiancé. He’s five years older then I am, so never a competitor. But I still say “hi” to him if I see him out on the course or after the race. After all these years, I think he finally recognizes me. In fact, he reaches his hand out to initiate the conversation this time. The man is lean, with fewer grey hairs than I have, a swarthy mustache, and a short little pony tail in back.

I’d noticed in the results – checking the older age group to see if anyone beat me – that the winner had gone 14 hours, and Dick had been somewhere over 16, the only two guys in 70-74 AG. He’s usually a bit slower than me, but … what if this was what I had to look forward to in 5 years. I don’t think I’d keep going if I knew I was going to slow down so dramatically.

“So, how was your race,” I asked neutrally.

“Oh, I had the bike from hell.” He went into a long story about multiple flats, waiting for a race support moto, and then having a brake issue which locked up his wheel. He was lucky to finish, it sounded like. He already had a Kona slot from an earlier race, so he was pretty philosophical about it. In the midst of this, he noted he was still operating his bike shop in Driggs, Idaho, so it was kind of curious he was having a series of mechanical issues in his last few races.

After a bit more banter about tri bike gear, Di2, saddles, and disc wheels, I asked him what was really on my mind: “So, why do we keep doing this?”

His response was eerie, almost an echo of my own words when people ask me why I’m racing. “I just like to race. I like trying to fit all the pieces of the jigsaw puzzle together, it’s really as much an intellectual exercise as it is a physical challenge.”

I was nodding vigorously in agreement, but was actually a bit disappointed inside. I was hoping to find some deep new insight from one of the few guys I know older than me who keeps doing this sport year after year, now into his eighth decade. But maybe it is just as simple for him as it is for me: racing is fun, succeeding at racing is even better, and sometimes, not every time, but sometimes, it all comes together and actually feels like floating. Setbacks, like bad weather or broken bikes, are just part of what brings us back, I guess.

I’d gone into this race with a very simple strategy. “I should win my AG if I just stay within myself and don’t try anything fancy,” is what I wrote in my race plan. With only 12 registered athletes in 65-69, and none of them with recent performances which posed any threat whatsoever to me, the only way I wasn’t winning and going back to Kona was if I did something to foul up my race.

So I approached race day with a very conservative mindset. The weather offered a bit of a challenge, with serious morning winds whipping up from the south into our faces at the swim start – 10-15 miles per hour, with more to come in the afternoon. The wind chop, coupled with dramatically fewer swimmers around me due to the rolling start, made for tricky sighting at times. Not only was it actual work to plow into the wind, but the wind wasn’t head on, making it very easy to veer off course. I was planning on a 1:16 swim, and ended up with 1:20, in line with others in the MOP who noted a 4-5 minutes slowdown against their expectations.

I walked through transition, spending 5:52 there (next closest in my AG was over 7:00). I was second out of the water, and gained over a minute just in T1.

The bike I knew would have several challenging segments. The first was a set of two 500’ hills, which would take 15 minutes each; that would be followed by a rolling upward trending 10 miles into the teeth of the wind. I anticipated that windy segment, especially on the second loop, would be a large mental challenge. The entire ride out from town the second time around, about 21 miles, covering 71-92 in the 112 mile bike leg, would be the crux of the pre-mile 18 part of the race. Staying low and continuing to push, despite the wind, would be the challenge. I kept my head in the game by thinking back and forward to the return trip – I’d reached 42 mph the first time around, and was determined to repeat that effort on the trip home.

Once again I kind of ambled through T2, spending 3+ minutes there, but again much faster than anyone else. What are these guys doing there, getting their blood pressure checked?

At this race, I usually run up on Dick Nordquest, a perennial Kona participant, somewhere in the first few miles. In 2001, he beat me by over 50 minutes at IM California, but since 2006, we’ve both been very consistent relative to each other on the IM CDA course: he was about 2 minutes faster on the swim, maybe a minute quicker on the bike, and two minutes slower in transition. So I would usually pass him in the first mile or two on the run. But with me losing 5 minutes in swim speed after my 2010 bike accident, I figured I might see him somewhere between miles 5 and 8.

Dick has done over 70 IMs, been to Kona 23 years in a row. He’s kind of an extrovert on the run – he’s exhibits the exact opposite of “No Friends” behavior on the marathon. He’s always chatting up guys around him with little self-deprecating jokes, and by the second half, has surrounded himself with a group who are walk/running their way to a 5+ hour split. In addition, he’s short, kind of bandy legged, and has developed a nice little pot belly in his advancing years.

So he’s pretty easy to spot on the course. At the base of the one hill on the run course, about mile 6 or so, I came up to him. I reminded him who I was, shook his hand, and as I shuffled by – I was hitting 9:35 miles pretty consistently for the first 18 miles – I asked him, “Do you have a Kona slot yet?”

“No, I don’t, so I guess I’ll have to beat you,” I countered as I started working up the hill.

Cheryl had stationed herself in her usual spot at mile 3/10/15/24, and seemed pretty pleased to see me the first few times. The second loop – mile 15 – I was starting to fade, ready for some Coke, and I gave her a big, slow, walking hug. We recon’d the next lap while we walked.

“Do you want me here coming back, or should I just go to the finish?”

“No, you stay here. It’s probably the only thing that’s gonna keep me going at that point.”

And that turned out to be right. After I finished mile 18, knowing I was over 30 minutes up on Dick, my body seemed to be saying, “OK, now you have permission to STOP racing.” My One Thing had been to win and go to Kona – with the winds as they were, no course record was in the cards – I turned off race mode, and went into survival shuffle.

I traded places back and forth with a couple of folks. One, Art Chan, had been an EN member in 2012. I would run ahead of him, walk out of the aid station, then start running again when he caught me. It seemed to work for both of us. Another gal, a local in a green Team CDA outfit, passed me about mile 21. Seeing I was walking, she reminded me, “You’ve got to keep going so you can give Cheryl a hug at the end of the lake.” I remembered we’d been running together the last time I saw Cheryl, so she’d witnessed our vows. “That was the best thing I’ve seen all day – so cool!” she added.

When I rounded the corner at mile 24, Cheryl was ready for me with the best thing I’d heard all day … she had Bruce Springsteen’s “Wrecking Ball” playing on her iPhone. I walked listening to the Boss belt out the song I’d been using as my mojo all spring, not wanting to leave his voice.

But Cheryl pushed me on, saying, “I really want to go to Hawaii – I want to see Annette and Michael (friends who’ve moved there) and get to the volcano at last.”

Well, then, if MY WIFE insists, then I guess I’ve got to keep going.

So I became an 11-12 minute superstar, saving my legs to start training again sooner rather than later, and finished just over 13 hours. Not pretty, but it got the job done. KQ #8, and another trip to the Big Island. 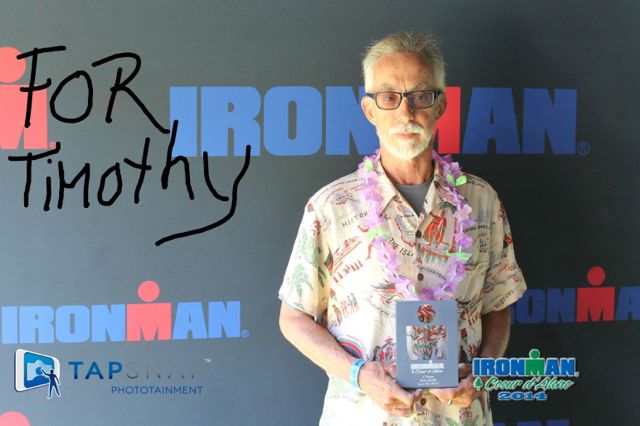 EPILOG
Two things that I made particular points of emphasis in my training this year were getting my fluids and nutrition down, and getting more comfortable and skilled at down hill biking.

Since my accident messed up my swallowing, I’ve been having trouble getting sufficient water, salt and calories on long distance bikes. This year, my dysphagia is no better, but I had at least trained myself to get in 6 ounces every 15 minutes, and 250-300 calories every hour. The practice paid off, and I used every bit of my planned nutrition for maybe the first time ever in an Ironman.

And all those downhill rides in Colorado had steeled me to use the wind and the gradient to fly by all the folks who passed me going up hill. I was able to spin until 38 mph, and coast up to 42.9 for my max speed. Not very exciting, I know (back in 1997, I was still able to hit 55+ while going down the long straight hills of Iowa), but for me, it seemed a breakthrough.

Listen to the Voice of the Nation Podcast with Al Truscott