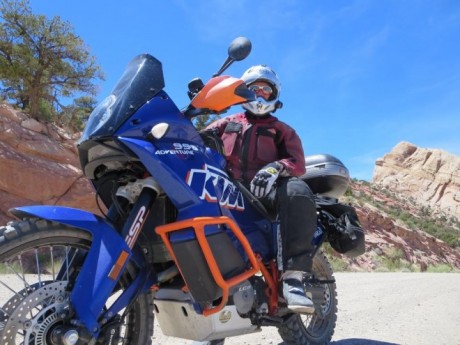 Coach Rich, coming to a bike course near you!

Please read the blog post and watch the video below, as Coach Rich explains the rules and their practical application, from his experience as an long course triathlete, coaching, and having ridden motorcycle support for many Ironman® events.

So we’re trying to fix that by helping to educate the long course triathlon community about the rules of their sport.

Remember: if you’re not actively passing someone, you need to move fully over to the right.

This is where it gets a little tricky, as we begin to get into body language, intent, and other factors that draft marshals look for to identify people they need to watch more closely.

Need help executing your next race?
Get our Long Course Triathlon Seminar.

This is the scenario:

You now have two choices:

Door #2 leaves you 100% in the clear, as you are never close to being in violation, and your actions and body language communicate to a draft marshal that you are definitely making your own way through the field.

Door #1, however, can potentially identify you to a race official that you are someone to watch. Note that when you take up your position between Third and First, you will likely be inside the draft zone of Mr. Third…so you’re supposed to pass him within 20 seconds, correct? But you don’t. Instead you back out of this space, exiting the zone from the rear, which you have 20 seconds to do. But where in the scenario above did your 20 seconds start? Does a draft marshal have a watch, counting off the 20 seconds, on both you and Mr. Third.

This is where a draft marshal is going to rely on his experience as a cyclist to know when someone is trying to intentionally draft, by observing their actions and body language.

Understand that a draft marshal is very likely another athlete and he’ll rely on his experience with body language and other tells to identify the intentional drafters among a field of over 2000 athletes.

Always ride as far to the right as you safely can, except when passing. In fact, the only time you’re anywhere other than far to the right is when you are in the act of passing another athlete. I can’t tell you how many times I’m seen Mr. AllThatAndaBagofChips riding in the middle of the lane…because certainly no one could be passing him…except the 10 guys stacked up behind him trying to pass him.

Never ride side by side with anyone, for any reason, ever. Say hi…as you pass them or they pass you.

Outside Assistance / Pacers on the Run

No one, regardless of their projected finish time, reasons for racing (“just finish” vs Kona), etc, is allowed to have anyone other than an athlete actually in the race run next to them. No, you can’t finish the race and then go back out into the dark and help them finish the run. Once you cross the finish line you are no longer a competitor. Any assistance you give another athlete is outside assistance.

Here’s the Deal (gets up on soapbox):

You’ve spent a lot of time, sweat, and money to toe the line and earn a very unique title. Tens of thousands of people have successfully earned that title the right way — by running / walking / crawling without the woobie of a husband, wife, friend, or non-racing athlete.

Suck it up. The Hard — solo, in the dark, if that’s what it takes — is what you signed up for. Get it done the right way, and earn it the right way, as tens of thousands before you have.

Comments Heard from Other Athletes re Drafting, Race Officials, etc

I saw huge packs out there! Why weren’t more penalties given?!!

First, I can cell you from experience that often what appears, from the rear or from the side of the road, to be a large pack of drafting cyclists, can often be quite different when observed from a motorcycle traveling at the same speed, at close distance, and offset to the side. Often proper spacing is observed and, rather then being static, athletes are in the act of passing and being passed. In other words, groups of cyclists are often much more dynamic than they appear to be when observed from the rear  on another bicycle, or from the side of the road.

So while, yes, drafting does occur, it’s usually not as bad as you think and, regardless, you can’t truly tell what’s going until you observe cyclists next to them, at their speed.

Second, understand that three conditions need to be met before a penalty can be assessed:

There are segments of all bike courses where these conditions can simply not be safely met. Last year I was Jimmy R’s driver at IMAZ, as we worked the male pro race, maintaining pace with pro’s riding through a crowded field of age groupers on a three loop out and back course…I still have PTSD from my 5hr Frogger session.

The race needs to put more course marshals out there!

That’s a great idea! However, a marshal on the course actually equals two volunteers: