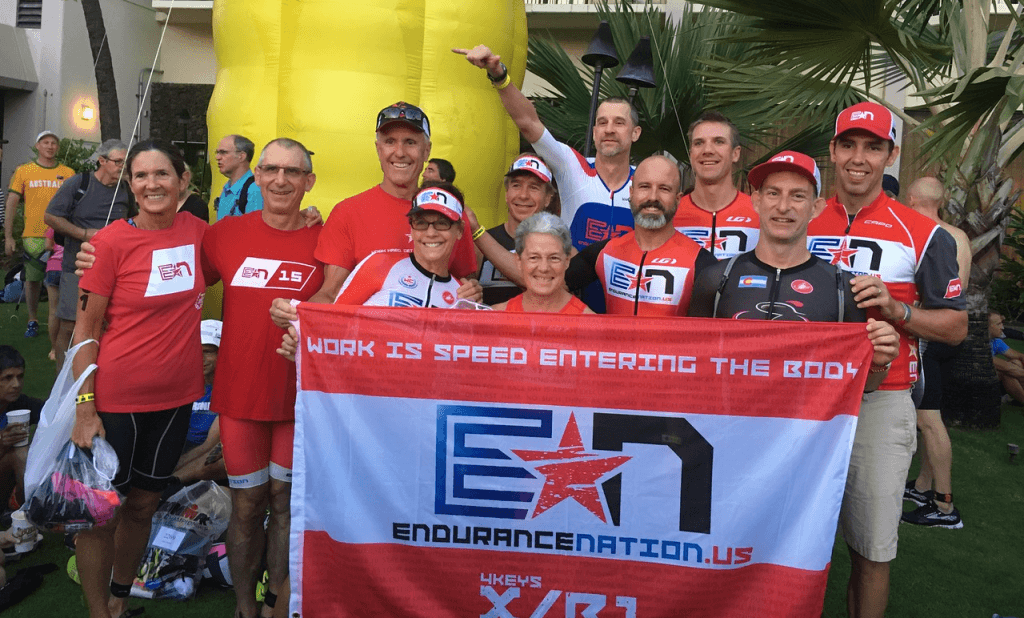 Sitting on the plane back to the mainland next to my teammates and surrounded by triathletes, it’s hard not to feel pretty darn good about this triathlon lifestyle. If you haven’t already read our Intro Weekend and Race Week Recap posts, click to check them out. This is the official end-of-camp and race over post.

Every year is special, and 2016 was no exception. Endurance Nation had several first time competitors — it’s always fun to experience the week and the race through their eyes. But we also had some veterans looking to improve upon prior placing — and it was neat to see how they were working to fulfill those goals as well.

By the end of the day, all of our athletes finished — and you can’t ask for more than that at the World Championships. This course, and the conditions, can vary in degree of difficulty from not only year to year, but from hour to hour. Add in mechanicals, nutrition issues and the competition and you have a very volatile race situation.

Everyone wakes up early on race morning because there’s really a limited space to park and no time to waste. The 4:45 am departure is about as late as we can go before running into race morning friction.

To make things easier, we take the campers down to the race start and let the families follow a bit later. While the athletes go around the back of the King Kam for body marking and to drop their Special Needs bags, we camp out at the front of the hotel and wait for the Team picture.

There was plenty of delay / friction around athlete body marking. Apparently there were multiple stations and quite a procedure. It took one of our athletes almost 30 minutes to get a number and have it applied! Hopefully in the future, this will improve!

After some quick and emotional goodbyes, it’s time for the athletes to head to the swim and for spectators to make their way to watch the start.

The water looked great, and with High Tide set for 9:25 it was clear the current would be pushing swimmers back at the end of the swim. Conditions were relatively favorable — as reflected in the overall swim times.

There were a ton of pro athletes out of the water by the 48 minute mark when usually elite swimmers such as Andy Potts have a small gap. Many age groupers were not only fast, they were able to swim pretty close to an even split. This wasn’t a swim race on skill per se; the conditions allows folks to swim to their fitness.

Sitting on the grassy midsection of Palani, we were right at Mile 3 (admin loop out) and Mile 9.5 (admin loop back). It was crazy to see just how fast the Pro Men and Women were descending and cornering. During the interlude to the Age Group race, we began to notice the outbound breeze to Hawi…it was apparent even by 8:15am that competitors were going to have a strong headwind to contend with on the way back. 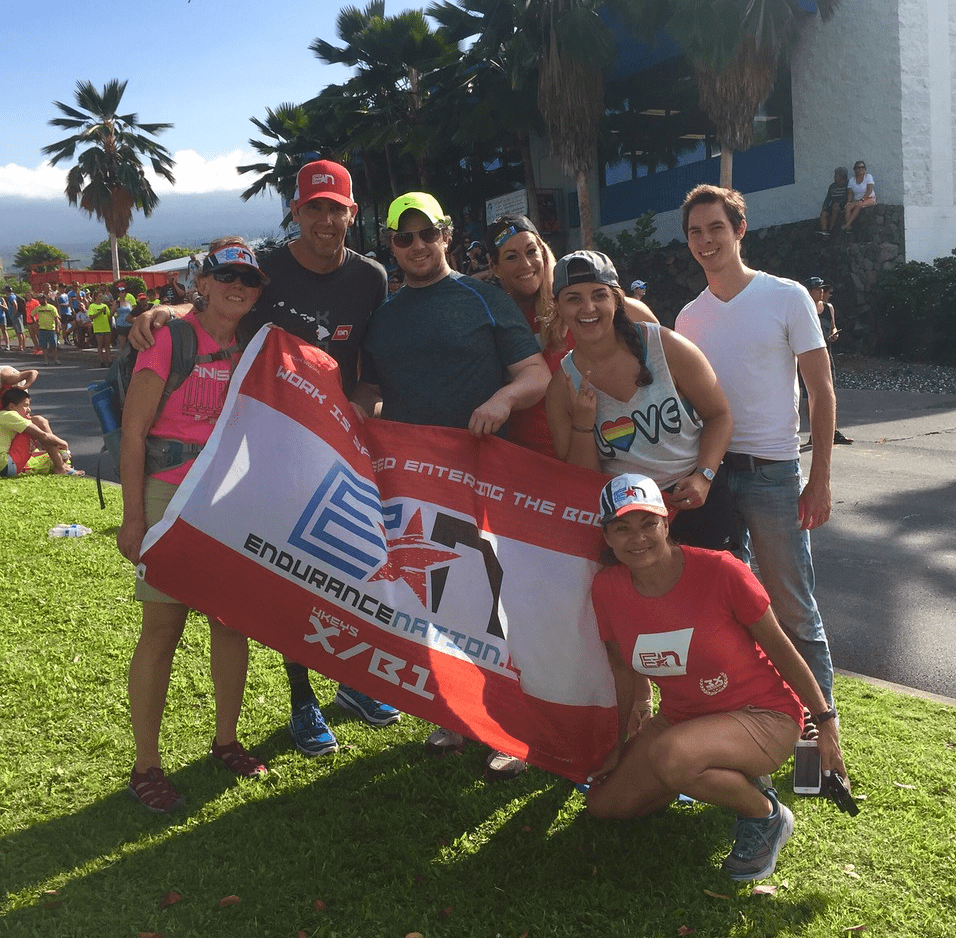 Cheering on everyone was fun, and stalking Team Endurance Nation was incredible. My highlight was watching Dave Tallo calmly avoid a crash after having someone else run right into his torso. Mad skills saved him and another ten athletes from having a terrible start to the day.

While the athletes made their way out to Hawi, we settled down to scan the Quarq Qollector page and follow their progress. The official broadcast didn’t mention too much wind, but we knew our athletes would feel it later in the day.

We took a break and fueled up at our favorite eatery — Daylight Mind — before heading out to see the Pro Men starting the run. 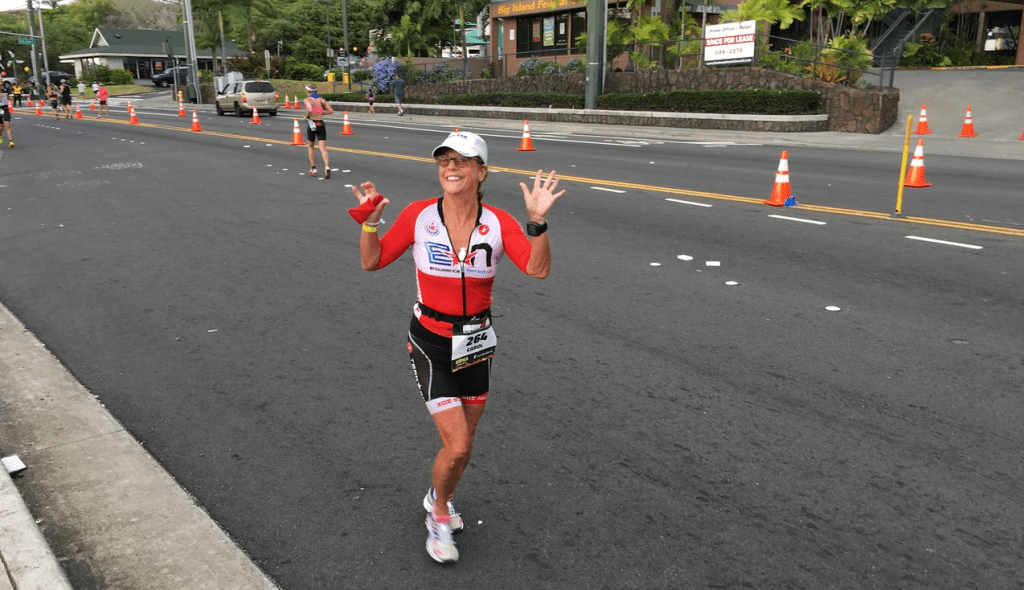 I’ve never seen so many men come off the bike in such a tight bunch. Early miles in Kona could have easily been mistaken for an ITU race. From this alone it was apparent to me that the Pros didn’t experience any decisive crosswind or headwinds on the day. When the conditions get harder, the bikers will typically respond by working harder to put the hurt on the runners…but not really today.

The wind from the bike was still present on Ali’i drive for the run, which is practically unheard of. Of course it was still really hot, but I believe that wind it what helped keep the pros cool enough to do some really incredible running — just look at the new marathon record of 2:39! 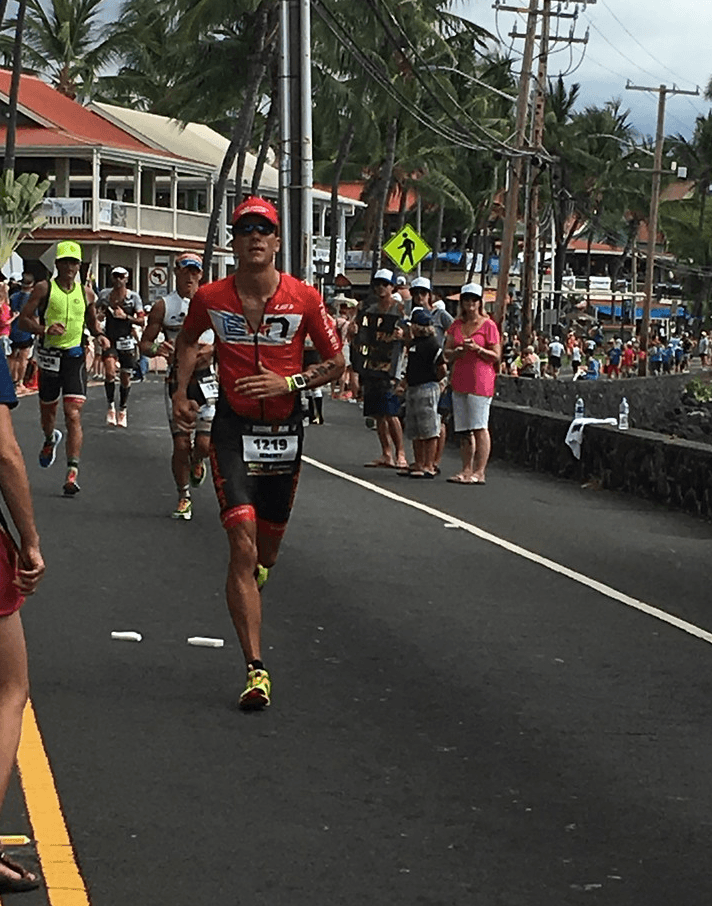 Early miles were super hot, but cloud cover rolled in around 4pm. So starting at the 9 hour mark on race day the competitors had a real break — every time the clouds rolled in it felt as though the temperature dropped by 8 to 10 degrees!

This intermittent cloud cover continued through sunset, when things really cooled off. Again, nothing easy about being out there for so long. Even as we headed into the dark we continued to support and high-five our Endurance Nation teammates out there getting it done. When you are in the depths of your race suffering, a friendly face can really make a difference. 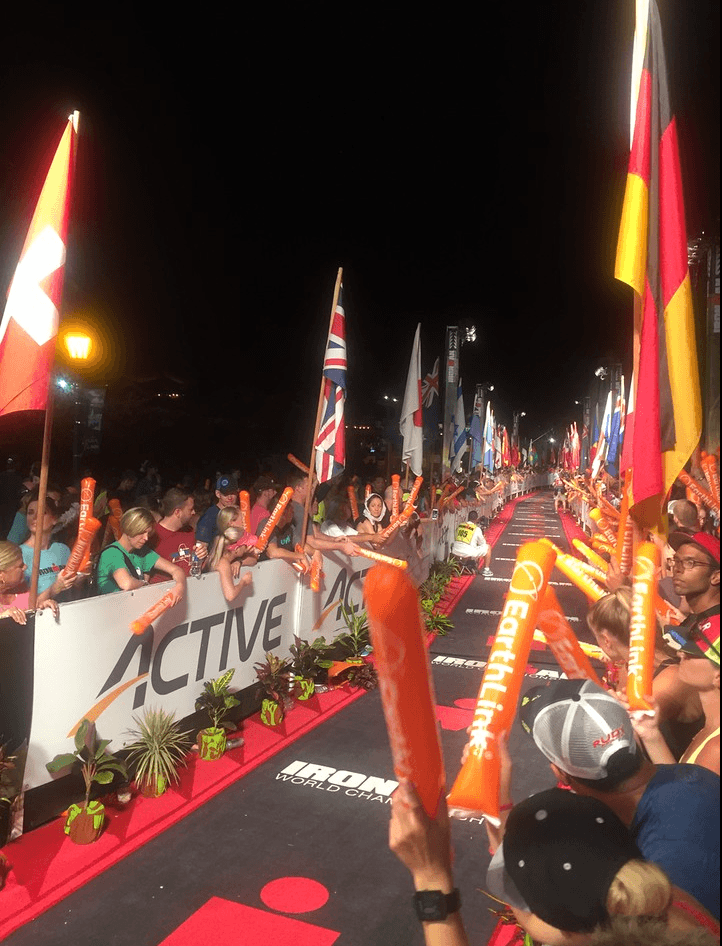 After 8pm it was off to the official finish line to cheer in all of the competitors. The energy of the Kona finish line is palpable — and the combination of the long run down Ali’i drive plus the enormous finishing area makes for an incredible moment. As spectators, we get to see it over, and over, and over. Just watching the faces of the athletes light up when the arch comes into view is electric!

We hung out at the finish line through midnight…through the Men’s and Women’s official finishes (there was a 15-minute gap at the start) and for the final closing fire ceremony and prayer. Watching this display is confirmation of the unique role that Hawaii plays in hosting the Ironman® World Championships. It was profound and moving, and with the dying echo of the final prayer the 2016 event was complete.

We returned back to the condos, reading race notes from everyone who had gotten their hands on their smartphones. As tired as everyone was, it was great to congratulate everyone and laugh at all of the amazing stories and events from the day. This continued into Sunday, the first official “off day” of the 2017 triathlon season…through the evening awards banquet and into the Monday flight home.

2017 will be our third annual Kona Experience, and we’re already making plans. Our goal is to support anyone who qualifies or just wants to travel / train / experience the race. For just one price you’ll get access to a beautiful condo that can hold your entire triathlon clan (up to three bedrooms + a sleeper sofa as needed) in a secluded ocean view area. We support you all week during your workouts and for all logistical needs as well. Join us to get acclimated and enjoy the biggest week of triathlon — learn more and make your deposit online here: https://www.endurancenation.us/camps/kona-race-experience-camp/