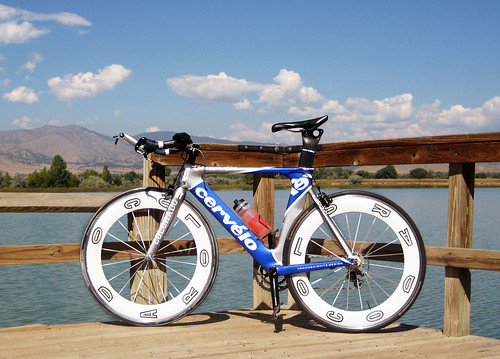 It sure looks fast…now how will you ride it?

There are two very important questions that you, as an Ironman® athlete, have to be ready to answer about your bike fitness heading into the final eight weeks of your Ironman® or Half Ironman® training cycle. First you have to know what your Functional Threshold Power (link?) is, or at least the Heart Rate equivalent. Second, you have to be able to give a resounding “YES!” answer as to whether or not you have done all of your bike workouts, especially the longer sessions.

In other words, successful race prep is about knowing your limits (your power/HR numbers) and about having confidence in your strengths. If you fudge either of these factors on your way to Race Day, your overall performance will suffer and you won’t be able to race to your potential.

The closer you get to the Big Day, however, the harder these two questions become to answer. Cumulative fatigue mounts, and your ability to generate or even sustain threshold effort on the bike becomes severely compromised. This can lead you to question your fitness and overall preparedness, and perhaps even to make some rash decisions.

I have this “friend” who is training for Lake Placid 2011. His name is Patrick, and he’s a coach with Endurance Nation. Really nice guy…and here’s his FTP dilemma. It’s a story repeated across athletes and seasons; maybe it’s even happened to you.

Back in February, his FTP tested out at 342 on the indoor trainer, putting his estimated outdoor watts pretty close to 360.

When he got outside on his road bike in April, he spent four weeks chasing that estimated outdoor FTP before he acknowledged that the single test he took must have been an outlier. He dials his FTP back down to 342.

At the end of May, Patrick busts out his Tri Bike and notices right away that he can’t generate the same high numbers in the aero position, so he dials the watts down to 330.

And now with just three weeks to go, with some epic long rides and lots of long runs on his legs, Patrick is having trouble even hitting 330…it’s more like 320.

Is Patrick in trouble? Has he been getting less and less fit all year long? Has his entire season been a waste since that one test in February? The answer is no, across the board, and here’s why Patrick remains confident heading into his biggest race of the season.

Volume vs Intensity Inside EN

Volume gets a bad rap inside Endurance Nation, at least on the surface. We prefer to use intensity to create training stress, as it’s a much more time-effective method. As such, our OutSeason® training includes lots of intervals and, commensurately, lots of rest. This is why back in February, Patrick and many other EN athletes were posting life best numbers.

As the weather turns and we move outdoors, the nature of our regular rides changes significantly. While the intervals remain an important component, the overall volume of almost every session is lengthened. Instead of doing 90 minutes of interval work on the bike across four total hours of riding, EN athletes will do that same 90 minutes across six or even eight hours on the bike.

This ratio continues to decrease the closer you get to your big race, as the long rides for an Ironman® can mean a week of cycling nine hours. And that doesn’t take into account if you have added a Big Bike Weekend or Week into your season, like Patrick did back in May when he put in over 600 miles in nine days.

FTP Down but Race Fitness Up

At the end of the day, how we train is a function of the principle of specificity. In the Winter months, with no long race on the calendar, we can do a great deal of high intensity training to improve the upper limits of our bike and run fitness. As we move into the season and approach our Half or Ironman® event, the mileage increases to prepare us for the rigors of the day.

While Patrick’s FTP appears to be on a downward trend, the simple truth is that he has been manipulating Training Stress by adding more time at a lower, race specific intensity. This is in stark contrast to the Winter training with it’s 8-, 12-, and 20-minute interval repeats.

Here is a good example of how this situation plays out. On Wednesday, Patrick can’t hit his current FTP of 330 during the mid-week interval session, turning in intervals in the 90% to 92% range (instead of the preferred 95-100% range). On Saturday he ride 150 miles at 74.5% of his FTP, — significantly higher that he had estimated. So while the high-end fitness isn’t necessarily there, it’s easy to see how the Winter strength has transformed into race-specific endurance.

Zen and the Art of Training for the Final Eight Weeks

While our Triathlon Training Plans include interval sessions and at least one bike and run fitness test, your top priorities lie elsewhere. With the shift to Race Prep training in the last twelve weeks / three months of your plan, your focus should also move from a quantitative obsession with bike and run threshold numbers.

You top goal for the final eight weeks is to remain healthy — so recover well and get lots of sleep. You need to be consistent with your sessions — so manage your effort every day so you can hit the workouts as written for each consecutive day. In other words, no hero sessions that set you back for a few days…please!

Your mental focus is on riding and running as steadily as possible, and you should be constantly testing your race fit and gear for the bike.  Every long ride is a chance to see how your bike position feels, how your clothing choice works, whether or not your nutrition is effective, etc. Race Day is about Execution, Not Fitness — the bike and run courses don’t care what your FTP is…they only care how well you ride them.

Inside Endurance Nation, we put your fitness and execution to the test in the form of two Race Simulation workouts. These are a 112-mile bike (or 6 hours, whichever comes first) followed by a 6-mile run (or 1 hour, whichever comes first).  Most likely these workouts will be full of challenges. Not to worry as all these issues will ensure you are fit and ready to go come race day.

Just because coming by an FTP isn’t easy, doesn’t mean you can avoid it. It’s one of the most important metrics you need heading into the race so you can dial in the appropriate race effort that will set up a solid run.

While your first option is to complete another functional threshold test, the odds of you putting out a test indicative of your current fitness levels is pretty slim. It could be good, or it could be the double whammy that hurts your ego (another low number!) and messes up your race calculations.

Your second option is to review the data for the last month and make an educated guess. By using something like Training Peaks WKO to review the power output for the last 30 days, you can accurately find where you have spent the majority of your time riding. You can ballpark your FTP by looking on the right side of the bell curve, as the bars start to drop down…the biggest incremental fall off in 10 watt increments is a good indicator of where your fitness moves from aerobic/sustainable to anaerobic/unsustainable.

Your fitness will be what it will be on race day; it’s not how strong you are on race day but rather how you use that strength. Rest assured that as an Endurance Nation member or training plan athlete, you have done all the hard work required to get stronger.

Instead of stressing about the final few watts or pounds, put your focus and attention to nailing the intangibles. Between dialing in your bike fit (see Todd at TTBikeFit.com), good bike setup, smart gearing choices, and how to ride steady/smart, EN athletes get a lot of free speed and smart riding mojo on race day. If your worried that you won’t be as strong as you’d like, then take comfort in knowing that you’ll be more aero, better geared and much, much smarter.

Want more? Enjoy this video from Coach Patrick on how to handle a stalled FTP: