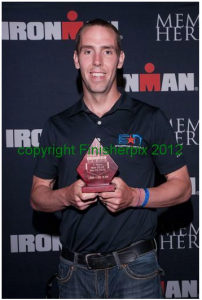 I recently won the men’s 35-39 age group, placing 28th overall, at Texas with finishing time of 9:27. This was a 25-minute personal best and a breakthrough performance for me, and I want to share how I did it.

Not because everyone can go sub-9:30 in an Ironman, but because how I set the stage for my breakthrough should help you do the same.

I have pretty much raced two Ironman® events a year since then, with a two year break in 2009 for my wife to race, followed by a broken hip in 2010. I healed well and have managed to continue my progression. In my last five races, including Texas, I have qualified for Kona.

Over this timeframe I have tried many different approaches for training. High volume, low volume? Been there.  Taper or no taper? Done that.  But the most important thing in retrospect was that I just kept at it. The longer you play this game, the more likely you are to win it….and that’s just what happened at Ironman® Texas.

After reviewing my performance last year with my coaching partner, Rich Strauss, it became clear that I preferred Ironman® races that were hilly and cool — Lake Placid and Ironman® Coeur d’Alene come to mind.

But at 6’2″ tall and 185 lbs, my body type lends itself to racing a flatter course. My fear of the heat led me to pick races that I figured I could do well at given the climate. But the math of what I could do on a flat course given my bike and run fitness was too compelling.

I have always underperformed in Kona’s heat & humidity, but realized that if I am to improve I’ll actually need to experiment by racing in similar conditions outside of just that one day.

With those two elements in mind, I decided on Texas as the perfect early season combination. And with a 4:56 bike split that included 3 minutes to fix a flat tire and a 3:15 run, clearly a flatter course is a good choice for me.

My kick off to this season wasn’t about training, it was about body composition. After Kona 2011, I returned home to eat enough Halloween candy to feed a small village. In three short weeks I had ballooned ten pounds, and so I was determined to get back on track as my main focus for improvement in 2012 was to come from racing at more optimal weight.

Even though I was training in the OutSeason, my eating habits were poor and the weight wasn’t coming off. Starting at Christmas, I began to focus on my calories. By February I had dropped 15 pounds and was seeing the results in my workouts and races. This included a 1:19 half marathon; a four minute personal best for me.

Making this commitment was tough, but it set me up to confidently make my call about racing Texas because I knew I was ready.

A Tighter OutSeason® to Race Window

I took a total of three weeks off of training, totally zero training, after Kona 2011. My first workout was a bike test at the start of the November OutSeason® training cycle. More than a few folks asked me if I needed more rest, but I felt ready given I had gone cold turkey after Kona.

After all, I only race three to four times a year and my work schedule allows me to sleep in most days and train when the kids are in school. This quick turnaround meant I was able to build off of the fitness I had created last year. There was no massive gap or retraction of fitness….it was just enough rest for me.

Traditionally in the wintertime I put up season best numbers for the bike and the run. With plenty of recovery time and hard intervals on the calendar, it’s easy to create some solid fitness. This generally fades over time as I transition to doing the longer rides and sessions that an Ironman® requires.

I didn’t have the luxury of doing sixteen or twenty weeks of training into Texas. At first I was concerned, but in retrospect I think the proximity of the OutSeason® to my race let me carry my peak bike and run fitness right into my race cycle. This practically eliminated any drop or fade in power, instead of watching it drop off with a prolonged period of building volume and creating fatigue. Of course, it’s worth noting that we had a very light winter and I was able to get in one camp on the Texas course as well.

In addition to my calorie counting focus, I have been working with The Core Diet team. They not only made some daily menu guides for me to follow for my training, but they gave me a specific Race Fueling Plan. Both were specific to me, and very helpful.

The biggest change here was the sheer amount of food and fluids I would take in when exercising. Almost every workout, even a 30-minute run, had fueling goals. There was never a wasted chance to practice race fueling.  Improvements in body composition were targeted outside of the exercise window. This was very effective until my two peak training weeks when I was unable to stick with the guidelines 100%.

I also worked with the Core Diet team to tweak my race fueling plan. I went from taking in 250 calories per hour on the bike to taking in 750…and no, that’s not a typo. My Texas plan called for three bottles of Perform an hour (3 x 170 calories) and a PowerBar (240 calories) in the first hour, for example. It was hard to get down, but I totally avoided any race day bonk and literally felt amazing. This continued with more food on the run, again almost double what I used to eat.

All in, I consumed about 250% of the calories I would have otherwise taken in over an Ironman® day. It sounds crazy but I trained to do it and no bonking over the course of the day simply doesn’t lie.  I am completely converted.

My experience racing means I have rolled the Ironman® dice many times and know what does and doesn’t work. I have made almost every possible mistake on race day, and as a result I can handle my body and most issues with confidence.

I know how to pace the swim and the bike appropriately for me. I know how to start the run and how to handle the mental challenge of finishing. I know what to do when it’s really hot, or when the wind picks up. I know what it means when my fingers start tingling or when I stop sweating and I know how to fix it.

On this particular day, my execution skills helped me to overcome:

A Ton of Luck

It goes without saying that a ton of things have to go right for a good race to come together. I can say all I want about my skills and experience, but at the end of the day there were some seriously good things that happened to me that were out of my control. I was simply positioned to do well when everything aligned, and they did.

What Does This Mean For You?

Hopefully aside from learning a few things, you also take away that getting better / faster on race day isn’t always about a genetic gift or how many hours you have to train.

As you brainstorm your next big race, make sure everything is on the table. You never know what might make the biggest change in your performance. Good luck!

In this four-part virtual seminar, we’ll teach you how we build the most effective age-group triathlon training protocols on the planet. From defining an annual schedule to building a basic week, we’ll instruct you on how to make the most of your fitness and build your best possible season. You’ll receive eBook resources, as well as a discount on our training plans.