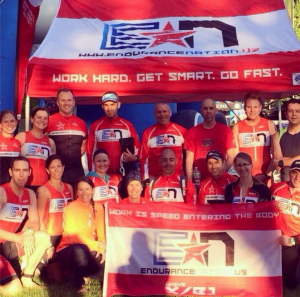 Coach Patrick McCrann hopped in the car and made the journey over to Middlebury, Connecticut for the 2014 Rev3 Quassy triathlon last weekend, and he came back with a pretty decent race to report on. While he worried a little about his recuperating shoulder (after a little accident he had last season), he was happy that his fitness was up to par. Read on for his account.

The swim was surprisingly uneventful. Nothing like a wave start—and a split wave as well—to make swim anxiety go away. I was a little worried about my shoulder as I had only been swimming for a few weeks. The wetsuit actually seemed to support it a bit and while I didn’t have the fitness to go any further, but I wasn’t all over the place either. Net swim time was 32:xx, which was practically the same as last year before my crash and double-surgery debacle that was 2013. Win!!

4,100+ feet of climbing in 56 miles is just plain sadistic. I mean, there really isn’t that much room in a half iron to do that. But it was done, and we rode it.

Having an 11/28 with DI2 electronic shifters made this ride soooo much more manageable. Even when I made a shifting error, correcting it was super easy. My cadence was 86 on average and I held a pretty steady heart rate at about 139.

I was able to push the bike all day, finishing with an IF of .818 and an NP of 262 watts…both personal bests for me at the Half Iron distance.

Knowing the course was huge – I got out in front on my fluids and food; making me a much happier camper. I drank 4 bottles of Gatorade and at 1 PowerBar and 3 gels. I also had 3 Salt Stick capsules to help keep my gut happy.

The net time was 2:42:xx or about 8 minutes faster than last year. For you geeks out there, here is the strava file.

The run was going to be a challenge, even without the heat of last year. I felt really solid heading out of T2, and was running at a good clip. It wasn’t until the hills at mile 3 that I started to suffer. My heart rate was happy between 145-150 bone, but hills had me much higher and I had to back off. I also had an issue with my shoes, as my Garmin footpod lace system had prevented me from properly tightening my left shoelace. Two stops (needed for high HR anyway) later, I finally took it off about mile 7 for good.

This was a bummer as I was running by cadence and HR, but my foot was on fire. Miles 8-11.5 were pretty solid as I was running well I the downs and flats…sub 7s…but the hills were crushing me.

I ate 4 gels and had either Gatorade or Cola at every aid station. All fluids were spiked with my Gatorlytes + Water solution.

The numbers were a 1:34:xx, or about 4 minutes faster than last year. Again for the geeks, here are the numbers on Strava. 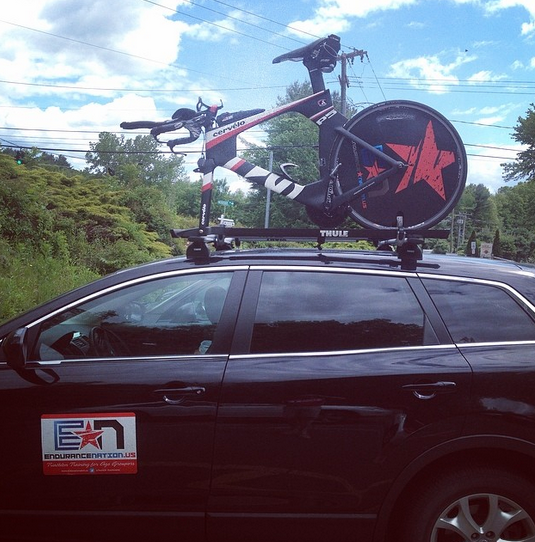 If you are interested, here is a quick review of my bike and run data via a screencast. 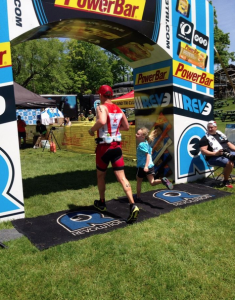 Always great to finish with my daughter Emma (Megan wanted to catch, not run). Went right over to the timing truck and instantly printed my splits – gotta love Rev3. We will definitely be back, the Rev3 Team made EN right at home and everyone loves a legitimate weekend of suffering!!!

Then it was time for rides and roller coasters and more…and cheering the rest of the Team. EN was everywhere this weekend, and it was awesome to not only meet so many friends and new faces, but to cheer them on in the race. The East Coast vibe was strong, with many of our fellow teammates racing Raleigh 70.3® as well.