Lessons from Power for Riding the Long Course Bike

As coaches of a team of primarily long course triathletes, we feel that a powermeter is one of the best investments you make in your training and racing. But if that investment isn’t in the cards for you, or you have a powermeter but aren’t quite sure how to use it, we’d like to give you some lessons on how to ride the Ironman® bike course — lessons learned from having lived in the world of power-racing-and-training triathletes for nearly a decade. But first…

Very simply, power is the work you are performing, in real time, as you pedal your bike down the road. The unit of measurement is a watt. Think of a watt as the product of how hard you push down on the pedals with each pedal stroke and how often you push down on those pedals — your cadence.

This work is performed by your body, is applied to the cranks, is transferred to the rear wheel through the chainrings and chain, then applied to the rear wheel, which applies that power to the road. That power is used to counteract the variables of the mass of the rider, percent grade of the road, wind resistance, and the friction of the tires. The bike moves down the road and the product of all of this is speed. More work performed = more power to the real wheel = bike goes faster, holding all other variables constant. 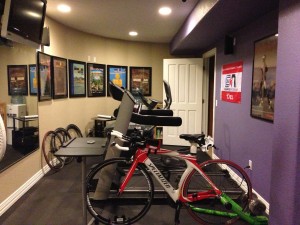 So you pedal bike for a couple hours and your powermeter spits out another number, Average Watts, which is exactly what it sounds like: the average watts you produced across your 2 hour ride. This average includes the huge power surge you threw down to the get up that hill, the coasting on the other side, etc.

Average Power is the physics of you riding your bike.

That is, average watts applied to a bike course of distance X, with % grades of Y, by a rider of weight A, wind resistance B, and rolling resistance C = a bike split.

Normalized power is an attempt to do this by assigning a greater weight to higher watts and thus capturing the high metabolic cost of higher watts, especially spikes in wattage as you surge up a hill, etc. In other words:

Normalized Power is how tired you made yourself while producing your average watts for the ride.

From these two concepts, Average Power (the physics of the work you produce) and Normalized Power (the effect that work has on your body), we can extract two fundamental pacing concepts for the Ironman® bike:

That is, the difference between your average watts and normalized watts is valuable as a tool to determine how good a job you did of following these fundamentals and we can measure that with (yet) another power term:

Example:
Billy and Timmy are twins on identical bikes riding side by side for 112 miles. They finish with the same bike split and have therefore produced identical average power of 200w. However, when we look at their Normalized Power (Pnorm) and VI, we see:

What we see here is that while our twins both produced the same average watts, and therefore identical bike splits, Timmy’s style of riding was metabolically more costly. He is more tired than Billy when they exit T2 and start the run. This high VI will have bad consequences on the run, especially a long, challenging run like a marathon after a 112 mile bike ride!

What are we really talking about here?

The best, set-up-the-marathon-correctly manner of executing the Ironman® bike is to ride steady, with very few or small variations of power:

Interested in learning more about how to execute a hilly Ironman® bike course correctly?

Go here to read How to Tame the Hilliest Bike Course