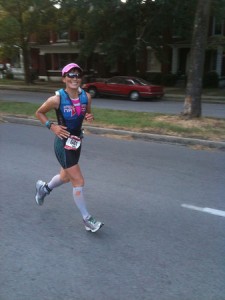 The following is a quick recap from IM Louisville by Coach Patrick. A full report will come later this week, as well as podcast interviews and more photos. For now you can see our pictures online via SmugMug and learn more about the weekend by cruising our Facebook page. If you like the vibe and want to be a part of Team EN, please become an ENFan to get a FREE Four Keys DVD and get cool insider updates!!

Louisville 2010 was going to be hot. We all knew it heading into the morning, and my first step outside my condo confirmed it — Sunday was going to be a true test of execution, nutrition, and mental skills. By mid-morning the sun was in full effect and it was bearing down on the racers. Combined with the humidity, it was an evil 1-2 punch that didn’t go away until some clouds rolled in around 6pm. Riding had a slight cooling effect; but it wasn’t helpful as most folks didn’t realize just how hot it had become started running! The swim line in the morning was just ridiculous. As in over a mile long ridiculous. Folks seemed to be pretty well-behaved, however, and some even brought chairs to sit in as they waited! It was crazy to see how differently everyone approached the swim in terms of their swim gear. There was everything from board shorts to speed suits (still legal as of this race) and everything in between. It seemed like a pretty orderly affair, but it did appear that some folks had been waiting since 4:30 or 5am in that line. Thanks to the TT start the swim seemed pretty un-physical for most folks, although it could have been that the rest of the day was so challenging that the early morning aqua-antics quickly faded. Out on the bike, it definitely was clear that Louisville was out to make an impression on the competitors. I was parked at mile 17 on the bike, at the end of 1694 by the aid station out there, and even that early in the day folks looked hot and out of sorts. Many had their “mile 80” faces on much too soon.

Reports came in that there were cars all over the course all day (both directions) and I witnessed quite a few even on my small section of the road. We had a pretty serious crash out there, as many new folks struggled to manage their nutrition at aid stations and continue riding. Over the course of the rolling course, the temps continued to climb and aid stations actually began to run out of water. Reports came in of people just getting off their bike and lying down in the drainage ditch on the side of the road…in the fetal position.

Most EN folks did quite well on the bike, as they had the execution experience to know that a hot day means a much longer day than planned. It was great to see TeamEN just rolling over the hills, sipping fluids and riding very calmly! I made my way over to Mile 6 / 18 by about 2pm, and it was a tough place to be. The race course was very quite again this year, with minimal spectators outside of Fourth Street live and the immediate vicinity. Otherwise folks were on their own in a very hot and quiet space with more than enough time to reflect on how their days might have been different. The walkers didn’t really start until about the 4pm or 9 hour mark on the day…with the TT start it’s hard to say where they were on the day, but most of them didn’t look so great.

EN got lots of good words and verbal hi-fives for our Four Keys guidance, with a few guys hamming it up at Mile 18. By the time I headed to the finish line around 7:30pm, I had seen two guys drop out, one guy puke his brain out and three separate van loads of guys getting pulled from the race. It was, without a doubt, very hot.

Fourth Street Live provided another great finish line experience. The fans, lights, music and Mike Reilly did not disappoint, with almost everyone finding their running legs for the classic Ironman® finisher pic. I was there for about 4 hours, catching lots of EN folks and getting video testimonials from them about their days. Not everyone finished, but each had a great story to tell about their Ironman® adventure. Be sure to check them out here on the EN YouTube channel.

We had people all across the board setting anything from a 45-minute personal best (in a hotter race!) to crushing their first IMs, to not setting a personal best but still having a great race. Sometimes you race the race, other times the race races you. It’s all part of the journey!

Video Testimonials
Don’t just listen to what our amazingly handsome coaching staff has to say, tune in to hear what our members think mere moments after crossing the finish line!