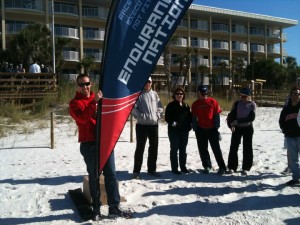 The following is a quick recap from IM Florida 2010 by Coach Patrick. This will become a full report later this week, as we add podcast interviews and more photos. For now you can see our pictures online via SmugMug and learn more about the weekend by cruising the official EN vs Florida site. If you like the vibe and want to explore Team EN, please become an ENFan, get a FREE Four Keys DVD and a link to create a free Five Day Trial and save $30/month on EN membership!!

Florida 2010 was going to be cold. We all knew it heading into the morning, and the first steps outside the hotel confirmed it — Sunday was going to be a great day to go fast if you could stay warm enough. By mid-morning the sun had warmed things up to reasonable temperatures, but brought some wind with it. Let’s not forget that the sun drops quickly this time of year in Florida — by 5pm things were pretty cool and by 9pm the temperature was barely above 40-degrees.

Officially the warmest part of the day, the swim wasn’t nearly as bad as most had feared. As is typical of Ironman® Florida, race week saw some spectacular waves and winds that made the prospect of 2.4 miles seem more like 24 miles…but on race morning things were decidedly better. Standing on the beach in wetsuits was no fun, but the water provided a great bit of warmth. Of course, exiting the water for transition meant a return to the cool weather and you could hear the teeth chattering throughout the changing area.

Out on the bike, it definitely was clear that we were in Florida. Rich and Patrick camped at mile 10 of the bike and we saw more than a few folks already locked on the rear wheel of the nearest competitor (as in 6 inches or less behind). We even saw the remnants of an accident, as one woman was literally forced off the side of a straight road by another racer. Within minutes the ambulances and firetrucks were on site to call an official end to her day.

Reports came in that the winds were challenging, but it was less the actual headwind as it was the fact it made things just _that much_ colder. The new course kept times about the same as they have been in the past. More than a few competitors lamented the fact that the new bike course still had the same old “out and back” section of jarring tarmac pavement.

Most EN folks did quite well on the bike, as they had the execution experience to know that a windy day means being ultra steady — look at the watts, not the speed. It was great to see TeamEN just rolling over the hills, sipping fluids and riding very calmly!

Rich and Patrick made their way over to Mile 6 / 18 by about 3pm, and it was already pretty cool. The wind was blowing out of town meaning that folks would have to run virtually uphill on both return legs. In Florida, the flat bike means there are more runners in general at this point of the day than at other races, but regardless you could start to see the tone of the race change by about 5:00pm, as the 13+ hour crowd started to come through our checkpoint.

There were few smiles to be had, however, as by this time of day it was downright cold. In addition to the winds, the early onset of darkness was clearly going to put everyone to the test. There were more than a few folks in full length racing tights and jackets; we even saw one guy racing in pajama bottoms it was that cold.

We got a few good words and verbal hi-fives for our Four Keys guidance, with a few guys hamming it up. By the time we headed to the finish line around 6:30pm it was officially dark in the State Park…everyone was in their own private worlds.

2010 saw the finish line move back down by the BoardWalk hotel, and this was a step backwards in my mind. The final quarter mile was pretty deserted and really disconnected from the fans perched up on Front Beach road. Mike Reilly wasn’t announcing either, and the racers could have certainly used his inspirational voice.

We were at the finish until 9pm, catching lots of EN folks and getting video testimonials from them about their days. Everyone had a great story to tell about their Ironman® adventure. Be sure to check them out here on the EN YouTube channel.

We had people all across the board setting anything from a two hour plus personal best to crushing their first IMs, to not setting a personal best but still having a great race. You can see all of the athlete results on our official Team Tracking Page here.