My race nutrition began on Wednesday when we ﬂew into Huston. I just paid extra attention to hydration and ate clean. We got to the Woodlands after athlete checkin, so we spent the late afternoon scouting the downtown race venue. We had and early dinner, went grocery shopping and turned in by 9:30.

Thursday started early with a race rehearsal breakfast. It consisted of two instant oatmeal, 1/2 scoop of protein powder, one banana, half a Power Bar. I washed this down with a bottle of Perform. Packet and TBT bike pickup was early and went smoothly. Brian and I drove the bike course, all of it. Through the day I had Perform in hand. We had a late lunch with extra bread, protein and salad. We ate a light dinner.

Friday started with another early race breakfast like Thursday at 5am. Before the swim practice I took a Power Gel with the last of breakfast bottle of Perform. I swam without and with a wetsuit. Friday’s water temps were wetsuit legal, but everyone felt that race day temps would be wetsuit optional. My arm felt more comfortable in a suit, sighting was easy with prominent land points. I had a healthy lunch adding more carbs. Dinner was light, but with a balance of carbs and protein. I always had Perform in my hand. I turned in at 9 PM and actually slept for a few hours.

Saturday/race day started at 4 AM with the same breakfast. We reached transition by 5:45 and it took about 20 minutes to get nutrition on the bike and sunglasses stashed in my bike bag. After the 3/4 mile walk, we reached the swim start with a half hour to spare. I got marked, dropped off bags and ate a Power Gel with the last of a Perform I had been sipping all morning.

I put on wetsuit about 15 minutes before my wave, not wanting to overheat. I hung at the dock, peed and waited until 1 minute before start, then moved to center. I never found clean water! With near zero visibility, it was impossible to ﬁnd someone to draft behind or do a lot of strategic passing. I kept away from turn buoys, which looked like a cage ﬁght. I kept Coach P’s advice about the canal in mind as I made the last turn.

Yes, the canal was tight and splashy, but I could have ﬂoated on my back and still made good time, because of the forward momentum created by swimmers. I ﬂowed right up to the steps, through the strippers and found my bag. I honestly think that conditions forced me to be patient, keep a modest, steady pace that set a good tone for the day. Tim Cronk and Robin Sarner never hesitated with an “absolutely wear one” when I asked at dinner. Great advice!

T1 is were this Ironman® novice got lost! That tent was like a spa with a personal valet. after about 10 minutes it was time to maybe think about going for a ride. Until race day, my Garmin 910xt was a ﬂawless training partner. I could not get it to switch to bike and start. I ﬁnally turned it off and left T1, trying not to freak out. 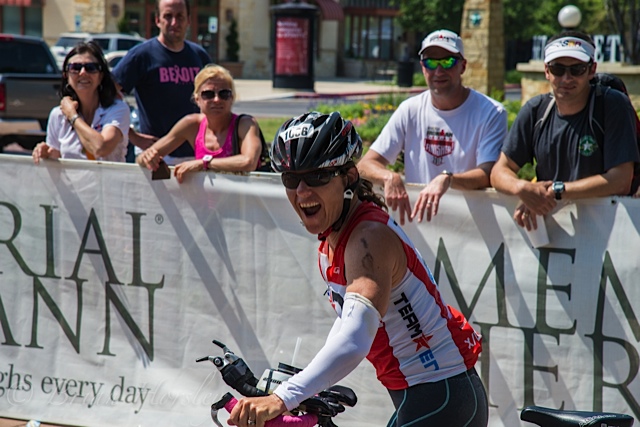 After about two miles of pleading, swearing and button pushing, this caveman got the Garmin going. My bike nutrition plan was Perform every 15 minutes and food every 30 minutes. I stuck to this religiously. I counted 12 bottles of Perform, 3 Powerbars, 2 small bonk breakers. At hour 4, I skipped one food, feeling a little backed up. After that no problem. As planned, I stopped food at mile 100 and continued to drink. I peed on my bike at about mile 35 and 50 and slightly at 90. I had trained with planned on using aid station nutrition, but the stations got more congested and dangerous as the race progressed. I was glad to have my power bars. Bonk breakers go down great, but it was safer to get ﬂuids and get out!

Because of heat fear, on race day I backed off on my watts to about 100 (long race rehearsals were great at 115-120) and tried not get over 145 on hills. I really tried to stick to this, while replaying coach P’s 4keys and his Texas advice in my mind. I was passed by several riders who shouted “EN stay inside your box!” I was really surprised how quickly the last 30 miles seemed to go by and I did start to pass more people. I know ﬂat, and I’m sorry Coach P, there were no ﬂat areas in this course. The hills were
not overwhelming, however. Watt watching and gear/chain ring change helped with mental time management. T2 was much faster. I skipped the optional spa treatments, but went pee. I also did not take my bike shoes off until I put running shoes on. After reading other foot burn reports, it appears that I made a wise mistake.

I’m not a fast runner and I have never run a marathon. My race mantra was the “12 minute rock star.” Keeping my heart rate from spiking was also a priority. I walked aid stations, ﬁnished my liquid , picked a point and started running again, mostly. There were a few short attitude adjustment walks, dirt hill protest march and and a potty break after the 1st mile of loop three. The ﬁrst loop L1 was hot, the second L2 was better and L3 was heavenly, because the sun was down. My calves were tired after L2 and the entire legs were tired mid way through L3. I had good sweat throughout and no other scary discomfort.

I stuck to my nutrition through L2 and made a few small experiments in L3 after I knew I was going to ﬁnish. The goal was Perform at every station and a non caffeinated Gu at every other station. No solids. I also iced down the sports bra at every aid station. I held ice in each hand and occasionally crunched on some. Early in L3 I tried a piece of banana rolled in pretzel salt. I also substituted a of coke for Perform late in L3. I made these substitutions out of curiosity not necessity. Every mile of L3 was an amazing mystery to me, and I was surprised at how good I felt. The crowd and adrenaline carried me the last miles and into the chute for a 14:00:40. 40 seconds?!

I was pretty religious about sticking to my race plan, but skipped the post race care plan and probably paid for it. I got caught up in the excitement and forgot about my feet. I did not take off my shoes, put my feet up or ice them post race, like normal log runs. I had lots of foot swelling for days and will deﬁnitely lose some toe nails. Its probably not a big deal, but I drank a chocolate milk instead of protein shake. My legs got stiff about 20 minutes after the ﬁnish, and were sore for about two days.

I had a BLAST and would love to do another IM.