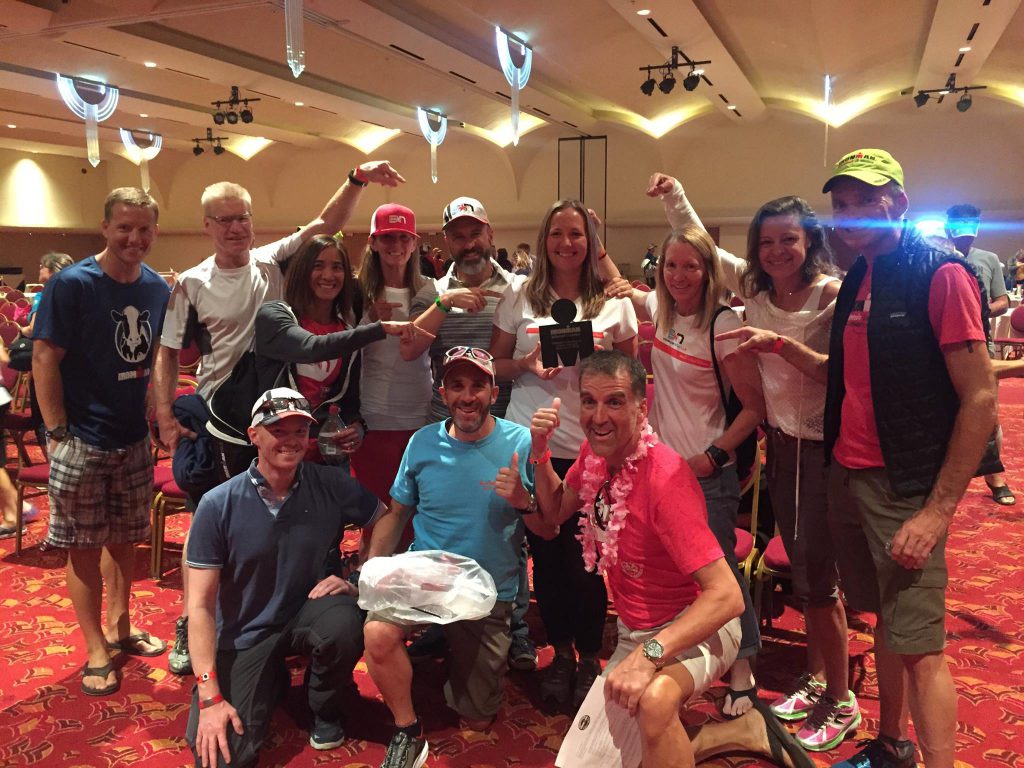 Lindsey’s determination and performance won her “The Game Ball Award,” and she was given our 1st Place Tri Club Trophy in recognition

I got in the water between 6:45-6:50 and headed to the right side of the ski ramp about 3-4 rows back. While heading to my spot I saw my dad and we had a few moments together which was a fantastic way to start the long day. The cannon went off and there was the standard washing machine chaos but I feel like I was able to find a rhythm really quickly. For me the length to the first buoy was the longest part of the swim. As expected there was a lot of traffic around the buoy and swimming directly into the sun for the short stint before the next turn around was a bit disorienting. Once on the back stretch I just focused on counting strokes and having long arms & pointy toes.

My swim training was pretty sub-par this year. They’re usually the first workouts to go if I need to move around my schedule and I only did 3 OWS all season. I tried to remember throughout the swim that the delta between going hard vs going easy isn’t much and going easy would set me up to get through transition and onto the bike. My swim this year was ~2 minutes slower than last year but I can’t say that wasn’t totally unexpected.

I found a wetsuit stripper and the thing just slid off me. Rich Stanbaugh’s advice on my Race Plan to keep moving through transition & Mariah’s comment that everything I do takes time & seconds turn into minutes were running through my head as I was jogging the helix. I grabbed my T1 bag and ran into the change room which was completely packed and there wasn’t a free volunteer in sight. I found a chair, dumped my bag out. Helmet on, grabbed shoes (had nutrition to stuff in my tri top in shoes), sunglasses, stuffed wetsuit in bag then threw bag to a volunteer. I grabbed a sip of water on the way out the door. Stopped at the sunscreen guys quickly and then jogged to my bike with shoes in hand. Since the EN rack was so nicely positioned in transition I decided to toss my shoes on as the volunteer at the rack held my bike. Took a few more steps to the mount line and I was off.

For the first 20 miles I focused on riding easy, getting HR down, and getting nutrition in. After mile 20 my focus was on finding free speed, not letting up on the downhills, and getting up the hills the best I could while remembering that the day isn’t over after I get up this one hill.  Again Rich & Shaughn’s advice from my race plan about making sure I was well above 12.5 mph was running through my head the whole ride. Right around mile 40, I think it was on the hill on mineral point after Barlow, I dropped my chain. I’ve dropped a chain once before and wouldn’t consider myself competent in fixing this problem, but somehow I got it back on there – probably killed something like 5-7 minutes here, but I’m not quite sure. I put that behind me and focused on what I had to do going forward to get through the bike. I was very focused on nutrition as last year I failed miserably at keeping myself hydrated & fed as I was so consumed with worry over finishing. This year I pushed through the pedals, drank, ate, and focused on the terrain ahead of me instead of letting myself worry. Then on the 2nd loop going up Valley Road I dropped my chain again. This time bike support was helping someone else about 200 yards behind me (lucky!) so they quickly came over and got the chain back on (maybe another 4-5 mins lost here waiting). Honestly, now I was pissed. I wasn’t going to let a couple dropped chains keep me from making it to the run. Remembering that seconds turn into minutes I peed on the bike this year (woot!), moved through every aid station, and didn’t stop at special needs. The only time I got off my bike was when that stupid chain dropped. I stayed aero when I wasn’t climbing and once I got passed midtown on the 2nd loop I made sure not to let up. I got some speed that last 20 or so miles and MADE THE BIKE CUTOFF!

T2 is a bit of a blur. It was emotional for me to have made the cutoff. I put socks & shoes on and grabbed my go bag. Stopped for more sunscreen and used the bathroom before jogging out of transition.

I spent the first few minutes getting the admin of my go bag taken care of while jogging. I threw some sunscreen on my face, race belt on, visor on, and race saver bag ready for ice. I checked on my pace after about 5 mins and was doing a 9:30 mile which is way too fast for me. I originally planned to take 30 steps at each aid station but here remembered Don Nowak’s advice and experience at IMLP and decided it would be a good idea to implement 5:1 run/walk for the first 5 miles. I took ice for the race saver bag & put that down the front of my shirt & GE at each aid station for the first 5 miles. I also took in a gel at miles 2, 4, and 6. By mile 6 I was feeling good but also knew that I’d have to keep pace through the entire marathon in order to make it by midnight so from mile 6-13 I jogged from aid station to aid station, with the exception of observatory hill which I walked. I started drinking coke at mile 6 and took coke at each aid station from there on out (except mile 20 & 21 where they were out of coke). At some point on my first loop I had the privilege of running next to Chris Canella as he was taking it home for a few minutes which lifted my spirits! I saw Dr. Rachel Hawe near the state street turn around looking adorable in her giraffe costume and she gave me some words of encouragement and reinforced that I was actually running!

Somewhere between miles 10-14 were the darkest parts of the marathon for me. It was at this time that it became clear to me that I simply couldn’t afford to slow down & had no room for error if I wanted to make the midnight cut off. This seemed daunting and impossible because in my mind I hadn’t hit “the line” yet and what would happen at “the line”?  Somewhere in there I also decided that I was going to finish the damn thing even if it wasn’t by midnight. Timing perfect as usual, Mariah popped up out of nowhere during these dark moments and gave it to me straight – it was a race now, if I wanted to finish before midnight, I couldn’t think of it as just finishing anymore. Every little walk break could be the difference. As I was approaching the turnaround I saw a bunch of other ENers who were out there high fiving me after they had already finished their races – amazing!

Mile 13 -18 I ran while walking the aid stations. There were a couple miles in there where I walked between aid stations but never for more than 30 steps and if I ever felt like I needed to stop running I forced myself to make 100 running steps and then re-assess. If I lost count before 100, I didn’t need a walk break that bad, if I made it to 100 and could keep going, I started over at 1 again. Sometimes I walked to the cone, and the cone said it was time to run again, so I ran. There was no decision making or choices, I was just following the rules.

I got to mile 18 and my angels appeared! Sue Chapman, Mary Larson, and Mariah were waiting there for me with great hugs & cheers! I was told I only got 10 steps per aid station at that point. Ugh, another rule. Ok. Saw them again at the state street turn around and then again when I popped out of the lakefront path where Sue jogged alongside me (someone yell at her, she’s supposed to be tapering J!) The angels told me that I’d get to mile 23 and then run the best 5k of my life. So, I got to mile 23 and my god did I ever want to walk! But that wasn’t an option. There’s a little hill somewhere in there where I walked fast for 30 steps and then ran. I didn’t stop at the mile 25 aid station. Once I approached the Capitol square people started telling me that I was going to be an Ironman and that I had 14 minutes to make it. There were 3 short turns around the square and I had thoughts of “omg! I’m actually going to make it!” and “hold on, you’re not there yet! Keep moving!” Then that left turn down the finish chute appeared and I was home. I negative split that marathon by ~3 minutes to make the cutoff and I truly owe that 2nd half of the marathon to EN and all of you who were out there (or online) cheering for me. I didn’t slow down and the love & support inside this team carried me there.