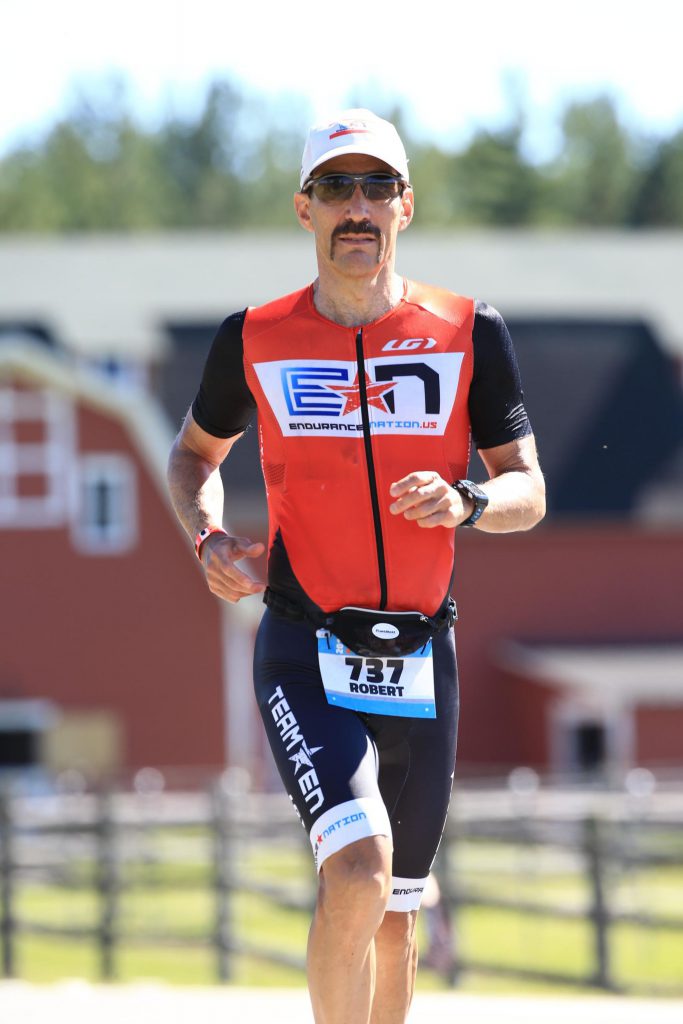 After IM MOO 2015, my hamstring which had bothered me for the past 2 years was tight so I pulled the plug on the NYC Marathon and started thinking about prep for 2016. I wrote up goals for 2016 and broke them down for Swim bike run and PT for hamstring and how I would achieve them with benchmark events.  I planned IMLP as my AAA race and figured I would put up a goal time.  I had a good OS and got my FTP back to the previous high ~250. I built further strength at the Tour of California.  Pre race, my weight was down to 147 pounds for a 3.74 W/kg.

My run did not have a speed limit like the last few years due to the hammy. I worked on durability and then speed.  I was hoping to be able to at least run 6:30 intervals this year but I was actually able to run some half mile repeats at 6 min/mile pace and tested my vdot at 54 but it was probably closer to 55 (all time high of 56).  I got a wetronome and worked on swim technique while getting my spm to 68.   My swim was way more consistent as well as faster.

I highly recommend writing out goals at the end of the season and looking back at them regularly.

Arrived at the house in LP that I rented thru VRBO on Wednesday with my wife (Kim), my daughter, and a family friend.  The house was right by Placid Planet bike shop so I went right there to drop off my older race wheels (Zipp 808 with PT) for Laura B and then went for a run.  There is a big hill to climb and descend to get to the lake from there which does not lend itself to an easy run.  Bu was very glad to stretch out the legs after the 8 hour drive.  I had also been stressing about the falling CTL and too rapidly rising TSB.  I plan to start another thread on the science and art of the taper.

Thursday I went to breakfast with my daughter and then to registration.  In the afternoon I went for a bike ride out past Whiteface and back up the climbs to LP.  The wind was howling as usual.  I then did one loop of the swim course and then went to the team dinner.  Didn’t have enough time to meet all the great team mates and the families of those I already knew.

Friday went down to the lake for the morning Team EN swim and run by the lake for 4 miles with some 3 minute Z2 work.  Rushed to get to the house and then back to town for the 4keys talk and didn’t eat enough food but made up for it with a good lunch as my parents, my in-laws and my sister and her two dogs showed up and they brought a lot of food.

Saturday was an easy day.  I had a big breakfast with family, finalized my bags and dropped off my bike and run/bike bags.  Last decision was not to use my Giro Aerohead helmet as it seemed too hot to use based on the few rides I had done in hot conditions, as the two vents just doesn’t give enough ventilation on a hot day for an IM.

SUNDAY Awake at 3:30 (protein powder, applesauce,half of a bagel and a banana) and then out at 4:45 and to transition by 5. Worked off my lists.  I will add TP to my list from here on out as two porta potties ran out.  No, I did not need to get creative.  Someone nice in the line gave me some.  6 AM foto with team and then down to the water.  Took a non-caffeinated gel and water about 20 minutes out and took 5 minutes to stretch and 5 minutes to do swim warmup.

I seeded myself in the middle to front of the 1:00-1:10 group.  Stood around waiting for the start for about 5 minutes trying to stay relaxed.  At 6:40 AM they finally started.  Instead of the 10 at a time system that they used in 2013 they let the first 300-400 people go together.  Worse then I expected but not as bad as a total mass start.  Dealt with the contact, found the cable both inside it and outside depending on the traffic and kept a solid rhythm and cadence.  Second loop I got back in the water quickly and tried to get back to pace.  I seemed to be getting blocked by a big guy in a ZOOT wetsuit with yellow writing.  Every time I tried to pass he seemed to move over.  His stroke had a glide component (slowing down each stroke) so I hit his feet each stroke.  Finally on the way back I got by him but it did slow me a bit on that loop.  Felt good coming out of the water and wasted a second or two and some mental energy looking at the clock which didn’t give me any information anyway.

Wetsuit quickly off and then ran by others on the way to T1.  Got my bag and went to the tent.  Helmet on. Sunglasses on. Bike shoes on. Grabbed my SPI belt and ran out.  I put on the belt while running to my bike.  No congestion and I mounted my bike and was on my way.

Started easy at .65 IF till the start of the descent and then worked the hill in aero position and worked the slightly flat section in the middle.  After turning left I switched the goal watts to .70.  At aid station 2 or 3 I was going about 24 mph and swatted away two bottles of water, two bottles of GE and a banana.  Luckily I still had some GE to get me to the next aid.  I was drinking just GE 1 ½ bottles the first hour then 1 bottle / hour.  I was also eating ¼ bars of powerbar or CLif, ½ banana or blocks and then just bananas or gels the last 2 hours.  A few packs of riders disrupted my pacing a bit but once we started climbing to Wilmington they mostly broke up.

At some point, I stopped noticing my 15minute alert to remind me to eat and drink.  I think I did keep up with fluids but fell behind on my planned solid intake.

I stopped quickly at BSN and took the baggy with more bars and gels ( the Volunteer was Bill’s wife thank you) and got going again.  The start of the second lap I was still feeling great and thinking the day was flying by.  On the climb out of town I dropped my chain and had to dismount and reset it.  This is where I needed to eat more but I think I let it slip.  The next hour or two my power/effort fell back to the .65 .  I peed multiple times ( no I did not get off my bike) so I think I was well hydrated.   I took a gel at the start of the whiteface climb back to town and a banana at the last aid a few miles before town.  No real problems with the bears.  Maybe put too much into the end of first loop and saved some for the end of second loop.

Left my shoes on my bike and ran to grab my bag.  In the tent, I put on socks which already had lube in them and Newtons.  Helmet to volunteer and left with go bag.  Put on hat, number belt with gels, sunscreen, and had run saver bag on wrist.

I am always glad to get out on the run but I just didn’t feel too great.  My legs felt heavy more in the not sharp kind of way instead of the I just biked 112 miles way.  Again, I will have to re-evaluate the taper.  I tried to keep my heart rate 120-125 with 130 on the hills.  I was concentrating on keeping cool with my run saver bag.  It was actually too cold at times to keep in my tri suit but was good in my hat. I also splashed my self with water.  I would get ice when needed and always sipped some GE but never walked more then 3-5 steps.  I took gels at mile 1-5-9-13- and at 18 took my last and then switched to coke.  I was using the base salts about halfway between each gel.  Its always great to see my family, both relatives and ENers on the course and along the sidelines.  Tried to say hello and be supportive but the concentration on the effort at hand made it tough.  Dino said something to me but I didn’t have a clue what he was talking about, SORRY.  Tried to at least get out a “GO EN”.

Grabbed my baggie from special needs without really stopping and reloaded gels in my belt and reapplied sunscreen on the run.  The first half was ~1:46 and the second half was ~1:48.  I tried to increase the effort and push the heart rate up some but felt I was close to the edge and I was nervous to go over.  That 16-20 mile mark is where everything hurts and you starting asking yourself questions.  I convinced myself to keep steady and not to stop for aid or porta potties.  I have been there before.  I now have to learn to answer with increased effort and not just steady work.  With about 4 miles to go I checked the time of day and knew if I kept steady I would break 11 hours so I kept pushing.  I did walk about 20 steps on the upper part of ski jump hill and the same on the top half of townie hill but got back to running at the left hand turn and caught the only other runner when I had started to walk and stayed steady till the top and then pushed as hard as I could to the finish.  After the turn around I was heading back when I almost got hit by one of those carts that brings ice and water to the aid stations.  Got to the oval and heard Mike Riley and saw a time well under my goal.  I was feeling pretty good compared to previous years but still needed my catchers help.  I saw my family, Rich, and Mariah.  I actually ate some food and my recovery drink.  The pizza was cold and gross as usual.  It’s the worst thing about IMLP.

I moved up 17 places in my age group on the run and passed about 200 people.

When I got back to my rental my daughter told me I was 5th in my age group which was obviously a big thrill to make my first full IM podium.  I had hoped I could be top 10 and Kona was not even on my radar.  You just don’t know who will show up and there are too few spots and too many things you can’t control.  I didn’t want to go into this race thinking it would be a failure unless I qualified.    That has ruined a lot of IMs for me in the past.  I don’t do these just to KQ so I remind myself to enjoy it for what it is.  There was a sign on the run course that said Kona Schmona which made me laugh and reminded me of one of my daughters who couldn’t be there this year.  This might become my motto.  That all said, when I found out I was 5th and thought there might be 4 spots I was seriously hoping for a roll down the next day.  Unfortunately, there was only three and none rolled down.

Things to work on:

I am thrilled with the results and proud of the work I did this year to prepare.  I am happy to be healthy and to have shared this journey with family and TEAM EN.

Looking forward to building on this going forward.