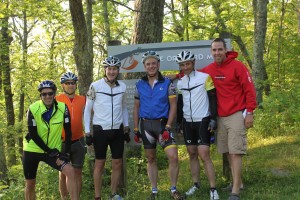 The fourth and final day of the 2012 BRP camp wasn’t that different than days one, two or three. This was due largely in part to the fact that we already rode this course yesterday. But the other part was just as easy to figure out: the roads were quiet and smooth; the views were spectacular; the terrain was just as challenging.

We kicked things off with an early start due to the travel plans of our campers (and me!). We also chose to drive to the top of Thunder Pass to make sure that we’d have plenty of time — and mojo — to make it to the finish. 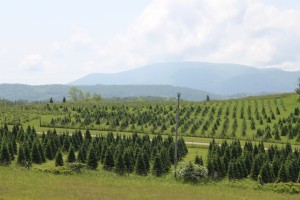 Clearly starting with a 12-mile descent is the way to go; nothing like some 40+ mph riding to loosen the legs and get the heart pumping!

After a quick stop it was time to pull off the arm warmers and vests and get to work. A solid group of four riders came together and they made quick work of the early hills.  In fact, they didn’t stop for lunch until almost 60 miles into the day.

While the campers were riding, I finally got my own wildlife experience. Speeding down to the lunch point I met this little guy who had picked my lane as the optimal basking location. I had to hustle back for the picture and make sure that I wasn’t too close for comfort! 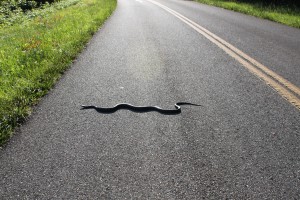 Post lunch things continued as they had started. The riders continued to work together, averaging a much higher pace than in the previous three days. Clearly they can smell the finish line!!

With only a few more stops for water, the campers flew down the final 11 miles back to Rock Fish Gap and our base station. While we still have to tally up the numbers, it looks like riders covered 370 miles in four days with just over 36,000 feet of climbing. 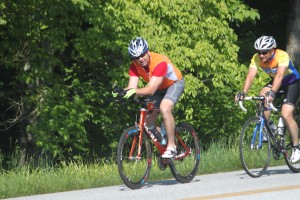 There was much talk about how to set things up better for the 2013 camp, and tentatively it looks like we’ll pick a homebase up on either Skyline Drive or the Blue Ridge Parkway. This will cut down on the admin / SAG work and allow campers to pick variable ride distances in the same day. Stay tuned for more information!!!!