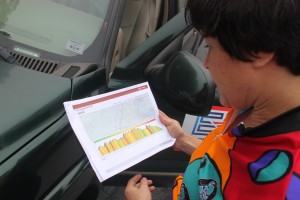 After returning from Front Royal yesterday, today’s course is plotted along the Blue Ridge Parkway. “Only” 85 miles, this route has roughly the same amount of gain as the 104 miles route of the first two days, with one big difference: an 11.5 mile climb of 3300 feet!

Breakfast started off just a little quieter than usual, but after a few calories and coffees things picked up. As with every day, the campers were outside and bikes loaded well before our launch time — earning major brownie points with the evil trip leader (yours truly). 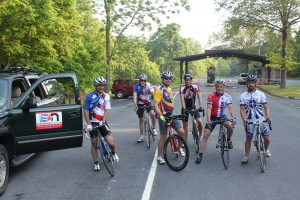 Riding up to the starting point on the day, the theme in the van was simple: pace yourself until you get to the big climb at mile 65! From the elevation profile, things looked innocent enough and with their plan in place the campers were off.

Within just a few miles it was clear that the massive finishing climb had managed to make the rest of the profile shrink on MapMyRide. As a result, what appeared to be flat and pretty straightforward was anything but!

To help the campers hands the actual route and the heat of the day, we ratcheted up support to every 10 miles. As the sun passed over the tree tops and began to bear down on the riders, the water began to disappear from our coolers pretty quickly! 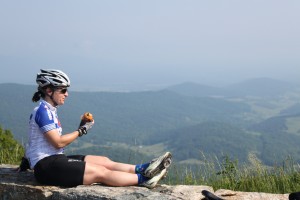 We took in lunch at mile 50 on the day. It was a very nice spot with a few, and everyone needed a break by this point. After fueling up, it was off to the descent: a sweeping 10 miles of turns, a tunnel and some views.

When it was all said and done the riders regrouped at the bottom of the final climb. It was mile 65, putting the finish just over 20 miles (and 3300 feet!) away. Dave and Dave took off pretty quickly for the top, but the rest of the campers needed a few minutes to compose themselves before they started.

The big climb itself is a pretty relentless affair. Most of the climb is at three to four percent grade, with enough switchbacks to keep you dizzy. The only redeeming quality of the mountain was the large amounts of shade that kept the campers from completely overheating. 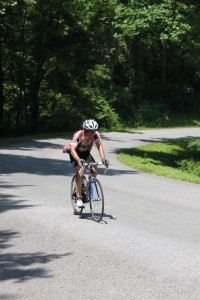 Once over the top it was a short 8-mile descent to the Peaks of Otter Lodge, our final home away from home. All told today’s ride brought 9,500+ feet of climbing and another seven hours of ride time. Needless to say our campers were ready for a great dinner, many beers, and a solid night’s sleep.