After a great week of hanging out with our teammates and many of our industry partners, it was time to race. On a super tough day, I went 9:52:xx which was good enough for my tenth finish here on the Big Island. Not my fastest time by any means, but my fastest time on one of the toughest days I’ve faced here. Ended up placing 39th in my AG and running a sub-3:30 marathon, both personal bests here.

The Swim was my typical start to my year, but then I transitioned to time in the pool logging most of my August and September

The Bike was very similar to last year’s build up. I started with Zwift early with volume (surprise!) and our training camps. But I didn’t carry it all the way through to Kona this year like last year; instead I backed the bike down a bit to make focus for the run as that was more of a primary goal. I still was able to

The Run was the focus for all things new for 2019. New interval focus and earlier weekly volume in the build. So working with WSM Rich Stanbaugh on my goal for a better run, we decided to incorporate three types of run intervals based around 3 hour marathon fitness (so I could run a target 3:15).  This included a mid-week Strength Run that started with Fast (6:05 pace) work for a few weeks, then transitioned into more Tempo (6:42 pace) as the volume build. By the end I was doing 45’ of tempo in a 10 mile run for some great work. Finally there were some stride-like efforts off the bike for brick runs but logistically I didn’t do many of them.

This race is notoriously hard to set goals. I am sure my past race reports have them, but I didn’t really have any front of mind heading into the race. Looking at my training, however, I did have some specific priorities. First, better swim fitness to reduce the cost of swimming if not make me faster. Second, better run fitness to both handle the heat and improve my ability to run the marathon in race conditions. The third goal was to remain as consistent as possible across the challenges of the day. 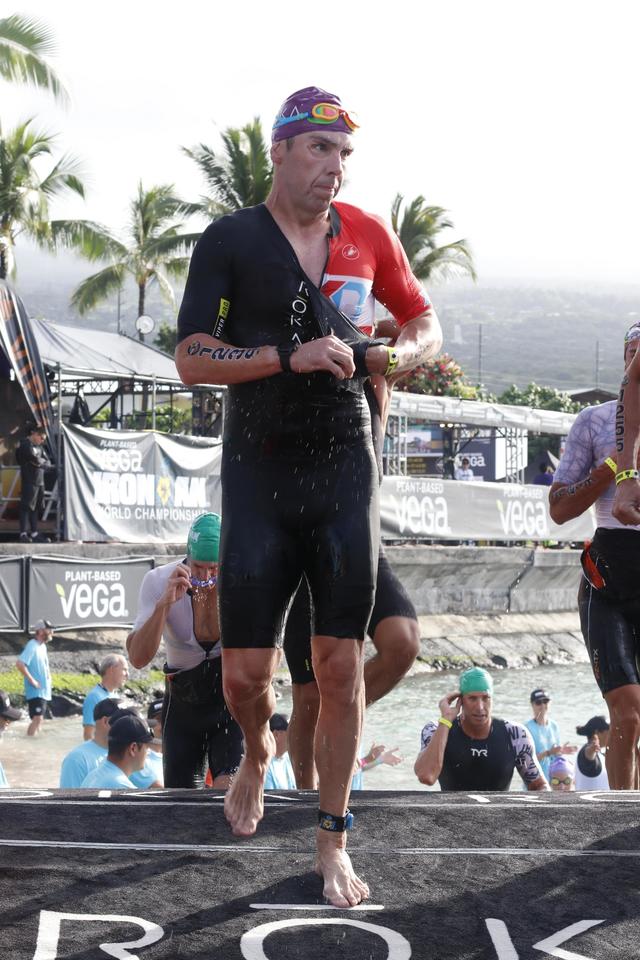 The new corral start is fantastic for the swim start and then lead up to the swim start. Orderly, simple and effective — can’t ask for more. I think that having wave starts does clog up the water a bit as different speed swimmers overlap, but I didn’t mind it at all.

We had a tailwind to start, so it was fast and smooth on the way out. The return trip was different as we had the swells, a current moving off shore and the chop from the wind. It wasn’t normal moving water; honestly I felt as though I was stuck inside a basketball.

I was able to settle into a good rhythm on the way out, but I did get stuck on at least two occasions behind people doing breaststroke or just swimming really slowly in a group. On the return the faster swimmers (started 5’ behind me) began to pass and it became much harder to hold my form. I was able to set some realistic expectations around the end of the swim to avoid being mentally defeated. It still did take forever to swim those last 500m, and it didn’t help that at this point I had drifted away from the buoy line a bit closer towards the pier. If I had to guess, this is where I “lost” my free time on the swim.

A few steps, taken deliberately and then I removed my swim skin under the water hoses. I never went into the changing tent and began putting my hip belt on as I ran into John Withrow exiting the tent. This was a welcome sight and we cracked a few jokes as we ran around the outside of transition. 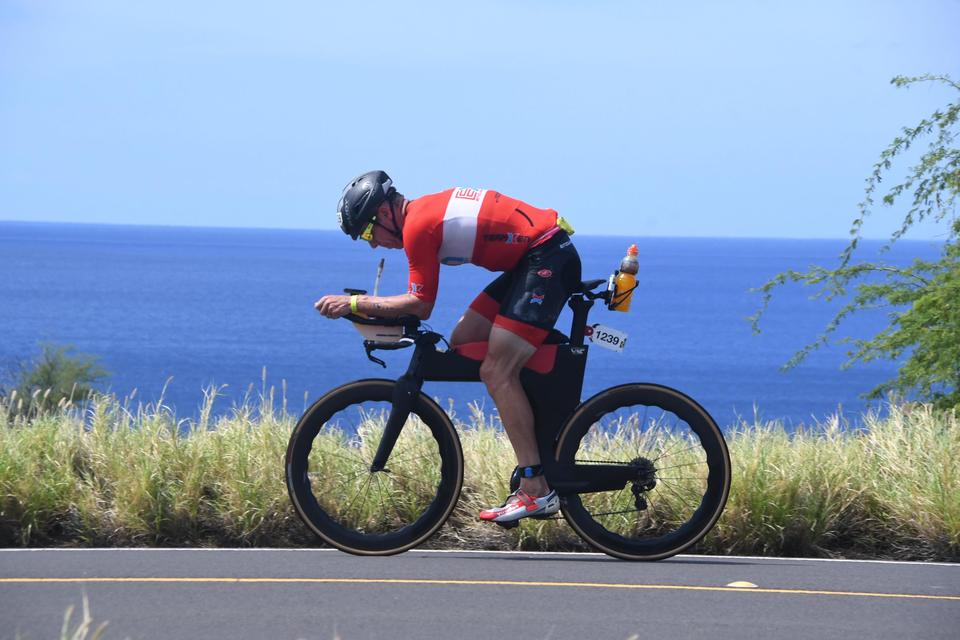 I showed up with basically the same fitness as I had last year. I earned it differently, with more of a maintenance structure vs the “building fitness” work I did in 2018. The was because I had allocated more of my work focus to the run, and there are real costs associated with running quality and volume.

As soon as we headed out on the Queen K I had a really strong sense that all bets were off. There were far less cyclists on the road (no free legal “draft”) and there was already a bit of a wind blowing.  I knew this mane a real deal of work was to follow and so I buckled in, The ride out was fairly smooth from a work perspective, but I could tell my body wasn’t happy with the gatorade. It seemed ridiculously tart and sure enough by about 2 hours in I wasn’t really into drinking it as much as I was burping that and my solid nutrition up. I started to cut the gatorade with some water and drinking a bit of coke as well.

Things were at about 80% of what I wanted when I started the return trip back to Kona. The notorious Kawaihae turn (steepest part of the course) had an insane headwind on it. At the top this wind just tuned to a solid crosshead and never really materialized into the tailwind we had anticipated. And unsurprisingly, this is where I started to unravel. My perceived effort was high, but my watts were really low. I was having trouble staying aero comfortably and I went into damage control mode. After 30’ of fighting things, I saw a portapotty on the side of the road and dismounted to pee. Total cost was 2 minutes but I felt a lot better. Back on the bike with about 35 miles to go, and I was able to gut out the rest. It wasn’t pretty, but I was no longer in Zone 0. The positive was that I had peed 2x on the bike, so I knew I was hydrated!

My number one goal here was to not have to pee for 2 minutes like every year. Of course, I still tried to pee and took my time with my new shoes (Nike 4%) so it still wasn’t that fast. Maybe next time! 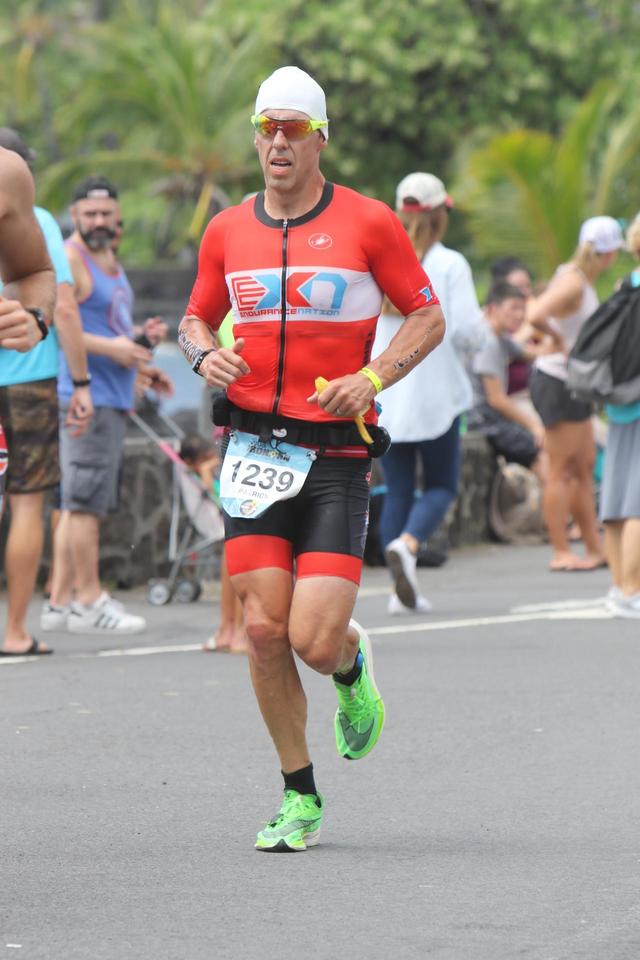 Targets here were to take about 20% off of my normal long run watts (260 down from 300) and work on cadence to get “set” while my HR stabilized at the bike levels. It was great to see my awesome wife and support crew on Alii Drive, and I was quickly on my way to getting settled in. I used the aid stations to stay cool and sort out my nutrition strategy. Given the gels I had on the bike, I opted for the Clip Bloks instead. I was getting wet and collecting ice from each aid station, trying not to walk too much. Heading back to town I was feeling okay and then we hit Palani. I got about 1/2 way up before my HR really peaked, so it was back to walking. Good news is that I was able to start running again at the top back in my stride.

The run out from Palani to the energy lab turn is about 7.5 miles I think, and it’s a really really long way mentally. I did my best to find a group to run with and stay as consistent as possible. I wasn’t lighting anything on fire, but also wasn’t slowing down. We were fortunate to have some intermittent cloud cover, which made periods of the run very manageable. I focused to climb out of the Energy Lab and resolved to keep working on the Queen K. It’s great to see all of our teammates along this stretch of road, shouting encouragement, and giving high fives.

With just two miles to go, I started picking up the pace for the final climb and heading into the finish. Strangely enough, it felt really good to actually run. If I have any regrets on the run, it’s that I spent a fair amount of time shuffling vs running with my natural gait. I hope to find a way to change that in the future, as I think it is possible to run well and still not overexert myself. 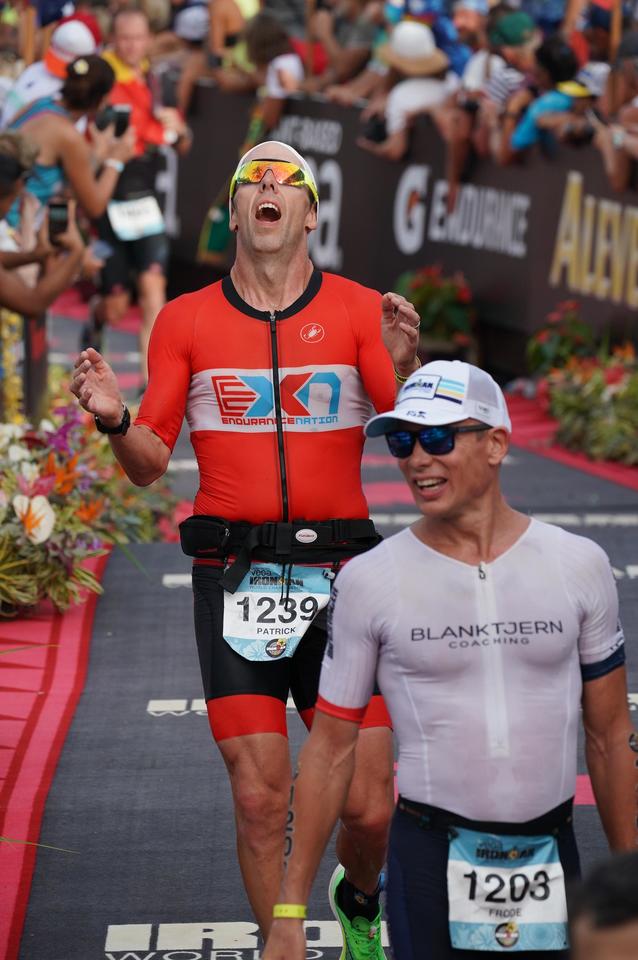 Ironman® Hawaii number ten was just as emotional as the first trip down Alii to the finish in 2006. This race holds a special place in my heart, and to race here amongst the greatest in the world, alongside my friends and teammates, with my family, is beyond special.  Hanging out post finish is my favorite time, swapping stories and hearing about how the day unfolded. Strangely enough, I got to hang out with Mark Allen who stopped to say hi when he recognized me from our interview the other month. His words about the day and the nature of this race really resonated with me.

Now I head home to recover and try to salvage fitness for another shot at Ironman Arizona. I have some changes to make to my protocols, a few toenails to triage and a mountain of work to catch up on.

Shout out to our partners are Ventum (www.ventumracing.com) for the incredible pre-race tech support and making sure my ride was 100% ready. Thanks for Normatec (www.normatecrecovery.com) for multiple recovery sessions and for hosting my interview with Matt Hanson (coming soon to the EN podcast channel). Thanks to ROKA (www.roka.com) for walking me through their latest and greatest gear, and for honoring our team discount as I upgraded my backpack to a next generation rig. Thanks to NUUN (www.nuunlife.com) for keeping me hydrated all week without too many calories. Thanks also to BOCO (www.bocogear.com) for dropping our epic trucker hats just in time for me to represent on the Big Island.

And of course, thank you to my amazing wife and family…and my extended Endurance Nation family of teammates. You never cease to amaze and inspire me!