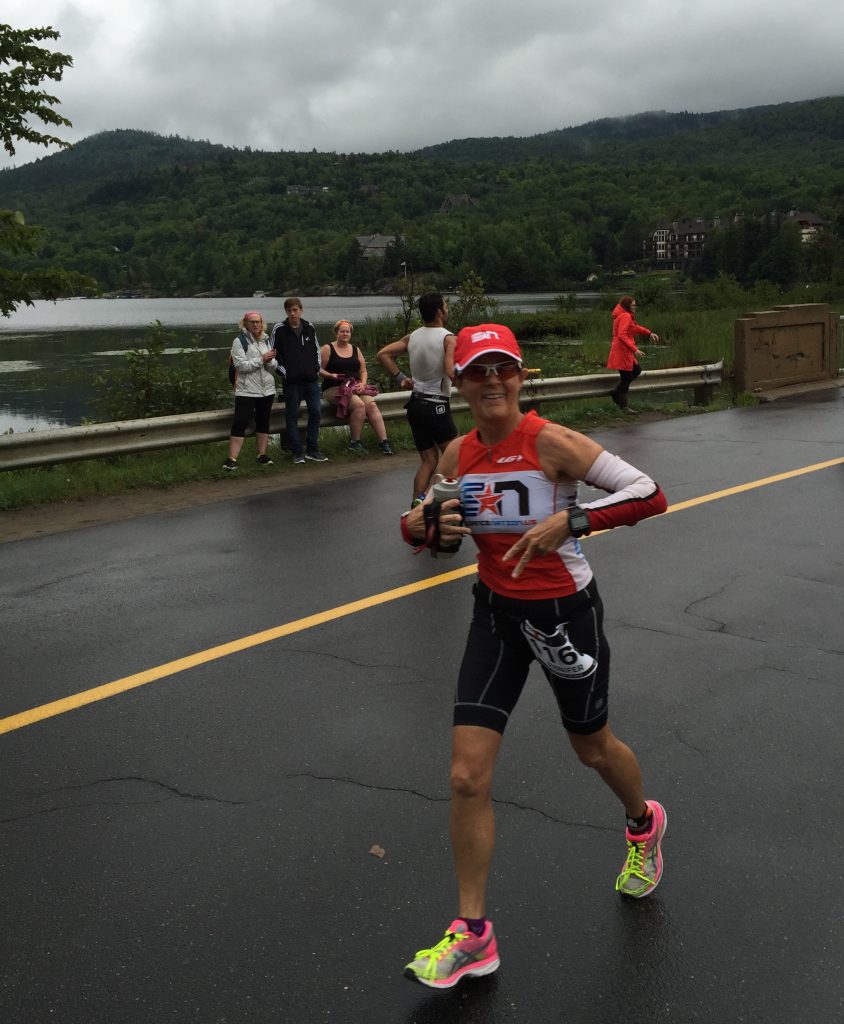 I went into this race saying it was my redemption race.  I didn’t finish Tahoe 2013 due to a crash that resulted in a broken collar bone and torn up shoulder, resulting in surgery.  I just wanted to finish and have fun and then ease back a bit and do some different stuff.  I even wrote in a journal and I wasn’t going to train for an IM again especially in Idaho!  (logistically is tough…minimal roads, swimming in lake for all swims and running with bear spray!)

So, I was a little relaxed with training.  By relaxed I mean I missed a few swims and a small run here or there, but still hit 95% of all workouts.

I chose Mt. Tremblant because it looked beautiful and it didn’t disappoint.  We were scheduled to leave Sacramento early on Tuesday and arrive in Montreal around 6.  On Sunday I woke up with the flu!  Really!!!  Fever, bad stomach and couldn’t get enough sleep.  Monday I was better and optimistic!  That was the 1st glitch.  Our plane left on time and arrived in Chicago with plenty of time to eat and make the connection.  40 minutes after arriving we were told our flight to Montreal was cancelled.  Several hours later we boarded and arrived in Montreal at 10PM and then had to drive to Mt. Tremblant…in pouring rain!!  We got to the condo at 1:30 and hit the hay!  2nd glitch….

Wednesday we had a great day and it was beautiful.  I did a little run to shake things out and felt great! Thursday we did the registration thing, picked up bike from Tri-Bike, went for a quick spin.  Friday did a practice swim which was wonderful.  I also did an easy 3 mile run and my route dumped me right in the middle of the kid’s 5k!  Those kids were really speedy!  It was fun encouraging all the little ones out there.

Saturday I had a big breakfast and dropped off bike and bags.  Very organized venue.  Then it was home and feet up watching the Olympics.

I went back and forth on what to wear.  I settled with shorts and a jersey with a vest in the pocket and arm warmers.  Got up at 4, ate my standard Oatmeal with applesauce and nuts, tea, water and beet elite.  Dressed and grabbed bags headed to transition.  Checked tire pressure and because of expected weather left them at 100psi.  I filled my 40oz speedfil with Osmo, aero bottle with water.  I had 2 picky bars a pro bar and a honey stinger waffle in a zip lock so they would stay as dry as possible.

Dropped off special needs and headed to swim start.  I felt really calm.

I liked the wave start.  I positioned myself on the right near the middle and swore I would go out calmly.  There was minimal shuffling for position.  I took Patrick’s advice and stayed on the inside of the buoys.  I felt great going out with the tail wind and just kept moving.  Then the 1st turn…it got rocky.  I popped up and looked around to get my bearings as it was hard to see the buoys.  I got a bit nauseous but just kept moving and once I hit the turn buoy to head in it was much better.  I loved that they had numbers on the buoys.  When I exited the water I looked at my watch and was pleased to see 1:19 (official was 1:20:02), good for 2nd in my AG.   Jogged along the red carpet to transition.

Nothing much to say about this…had to put dry clothes on a wet body!  The volunteers didn’t aide you at all as I had experienced in past IM’s.  I just made sure to get everything done in a streamline fashion.

What can I say about this bike that hasn’t been said?  It rained…and rained and pelted!  I was soaking wet.  That vest I had in my back pocket (never used) was drenched.  I was comfortable temperature wise.  I never felt cold and definitely never hot!  I knew I needed to hydrate regardless of the weather and started drinking water at about 10 minutes.  My goal was to stay in z1 for the 1st hour 88 watts.  Then bump it up to 96 watts for hrs 2-3 and gradually increase to 101 watts for the final, easing off a bit for the last 20 minutes (which you could do easily coming down Duplessis hill).  I started fueling with regularity, nibbling every 15 minutes and drinking every 10 or so.

When I hit HWY 117, the rain started and never really let up.  It was hard to see, but I had lite colored lenses which helped.  I stopped at the top of the hill for a potty break.  Then got back to business.  As I was coming back onto Montee Ryan, I dropped a chain.  Stopped and got it on and was off again, but when I tried to shift down into the smaller cogs it would make a weird skipping/hopping and would track smoothly.  I didn’t want to stop again, so I figured I would just have to ride in the larger cogs.  This is better than not having those, knowing what hills were coming.  As I was riding I noticed my power meter was not longer recording power.  It was only recording time and mileage.  HMMM???   After passing the intersection heading up Duplessis hill, I saw my husband cheering me on and told him I was doing well.  I stopped at the next aide station for a pee brake and decided to look at my cog.  There was a magnet stuck to the lower cogs..what the hell??  I pulled it off, stuck it in my pocket and headed off.  I was able to shift into the lower cogs!  Yay!  Still no power.

As I made my way up, I heard the sirens.  They passed me and as I got closer saw the carnage of a crash.  Note to self to be very careful coming down.   I was and made it down without incident.  Headed out to 2nd loop on perceived effort/heart rate.   Stopped at special needs to refill my speedfil and grab a tube and Pro Bar chews.  Prior to my power dying I was at 100watts average so I was doing okay.  Loved seeing the little corn cobb guy out on hiway 117.  Duplessis Hill was a lot harder the second time around and I could have sworn they moved the turnaround farther out!  I’m sure I burned a few matches the second time around.  The race director was still out there on the hill telling people to slow down and if you were being careful he would holler that he “loved you”!    I felt good coming off the bike.  I had made sure to take some salt pills.  I took 3 total on the bike, pee’d 4 times.  I was hydrated!

I kept the same shorts on but changed to my EN singlet and dry socks, grabbed my race belt that had my packets of Osmo, gels, Tums, salt tabs and a glucose tablet, along with my hand held bottle filled with Osmo.   Out the tent and onto the run…

Heading out on the run I saw EN supporters…Brenda??  cheering me on.  As I rounded the corner out onto the road, I saw 2 of my friends who started the race but dropped out.  Then I saw my husband and flashed him the EN sign.  I was going faster than I should have been and backed off, then walked up the 1st hill and started running again.  Settled into an 11:00 pace (should have been 11:30)…as I continued I eased up and finally was settling in.  Really pretty run course and the spectators were great.  At the turnaround I was still running and feeling pretty good.  I picked it up a bit, but not much.  Making my way back into the village was really fun!  Saw Carol which was great!  Saw my husband, gave him a kiss and headed on my way.  As I was nearing the end of the bike path on the 2nd loop, my stomach started to cramp a bit.  I had drunk 2 bottles of Osmo, so I switched to water and took a salt tab.  I started to feel better and had coke at around mile 19.  It tasted really good.  I nibbled on a ¼ tab of glucose to give me a little punch.  When I got to mile 22 ish, I was hungry so grabbed a banana and ate part of it and had some more coke.   I also opened another gel and took it at about mile 23.  Just after that I saw my husband who was walking towards me.  He didn’t see me, so I yelled at him…he came over and said I was in 2nd place and he thought that 1st was not too far ahead of me.  He said, “Keep running you are closing the gap”!  I said I would do what I could.  A few feet up I passed a woman but I couldn’t read her age as she was wearing compression socks!  So I just motored by and kept moving.  I walked the last big hill and could hear Mike Riley and music and I knew I was almost there.  A spectator hollered that I was looking great…then said..”Endurance Nation, Coach Rich would be proud”; my response was “He better be!”  I couldn’t stop smiling, knowing that I was going to finish and have a good placing.  Mike has always told me I look to serious at the finish.  Since this was going to be my “swan song”, I made it a point to have a blast coming down that shoot.  I was hooting and hollering, pumping my fist and smiling and felt like I was flying!  To hear Mike Riley call my name felt great!   I ate, met up with Mike, then got a massage and when they finally posted the results, low and behold, I was 1st!!  I’m going to Kona….so this wasn’t my “swan song”, not quite yet.

Things I learned from this race?  To be joyful!  My massage therapist told me to be joyful.  I was and the race came to me.  I was in a zone but mindful, and JOYFUL!

I also have a great partner in life!  He did every bike ride with me and pushed me when I wanted to quit.  He drove me to the lake 3 x’s a week and would walk the shore as I swam.  And when I went out for a run he would ride his mountain bike back and forth to make sure I was okay in “bear country”.

And, thanks to the EN family for the support and advice.  It was great seeing team mates out there on this course!