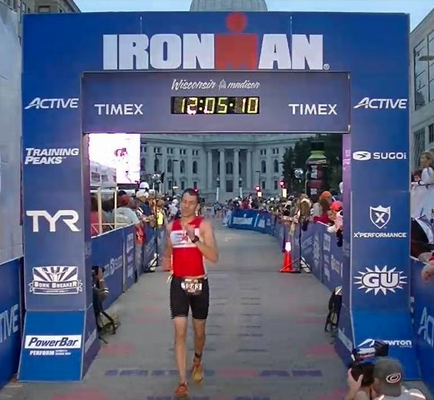 The planning for the last year had all come down to this one Sunday in September. To say that I had been dreaming about his day, would probably be an understatement. 20 years ago was the first time I heard about the Ironman. I remember reading about it at the library, dreaming about one day becoming an Ironman. But the years went by and life got in the way. Until last year, when after many years of trying to convince my brothers to do it with me, I finally got my youngest brother to agree. So last year, we volunteered at IMWI. It was the first time I had ever seen the race in person. I had only watched in on TV. But it was a great start to the what would be a brutal year of 4:00am wake up calls, ice baths, chaffing, long exhausting days, and so much learning. But that all lead to the start of my first Ironman.

Race morning was hectic. Trying to get my bike ready, drop off special needs bags, make sure I was hydrated, and getting family members to where they needed to be. I ended up my brother and my family after wasting a lot of time getting them situated. That’s actually why I did not make the team picture. But around 6:25am, I was down at the start line. I ended up talking with Mike Blackburn on the way toward the swim start, getting some last minute pointers, as he was a veteran. My brother caught up with me at the bottom of the stairs around 6:30am and we began pushing our way through the line, so we could get in the water early. We got in the water pretty quickly and then began wading next to the ski ramp.

The gun went off and it was crazy! I felt like I was in a pin ball machine, bouncing around for most of the swim. I was kicked in the face at least three times. The waves were also really bad. I would come up for breath and swallow lake water. The swim was brutal. The entire time I kept thinking, “I’m getting the killed out here, but I’m in the SWIM OF AN IRONMAN!!!! This is awesome!” The first turn was jammed up. I was on top of the people in front of me and there were a bunch of people on my back, as well. Actually, the first 3 turns were all pretty congested. It finally cleared up for me about 3/4 of the way through the swim. I got out of the water at 1:17, which was pretty close to the 1:15 that I was thinking I would finish at.

I ran out of the lake to the wetsuit peelers and had my suit ripped off me. Then began the trek up the helix to T1. I threw my wetsuit in my T1 bag, put on my helmet and sunglasses, and ran with my shoes in hand to my bike. I stopped at my bike row to put my shoes on, while they grabbed my bike. I timed it pretty well, so that I was ready by the time they had my bike. My plan on the bike was to take it pretty slowly. I wanted to conserve a lot of energy for the run. So I was consciously thinking of holding back the entire time. I ran into Steve Ross around mile 40, just before the big hills. He kept telling me, “slow and steady wins the race!” The crowds up the 3 big hills were awesome! It really felt like we were in the Tour de France! The crowds were really up lifting. The clown coming out of the corn was hilarious! Anyway, Steve went on ahead, and I started the second lap with his advice in mind. So I pulled back just a little more on the second lap. Between mile 70-80, I started to panic that I had pushed to hard on the bike. I could feel a little tightness in my legs and got into a little funk, thinking that I had ruin my run. I kept going though and caught up with Brent Pilon toward the end of the bike leg. We talked for a little bit about how the race had gone so far and ended up finishing the bike leg together. I ended up with a 6:15 bike time. I was thinking I would be between 6:00-6:30, so again I was right on track.

I threw my shoes on and ran out to start the marathon. I looked at the clock as I crossed the run out and it said I was at 8:00 hrs. My plan was to run a 9:00-9:15 min mile, as my zone 1 was an 8:32. Since I was already concerned that my legs were shot, I went a hair slower to make sure I didn’t have to slow down during the marathon. My plan was to walk the aid stations, but just the 30 steps. The first mile through the Capital was really difficult to keep at that 9 mile pace because of how amazing the crowd was! But I kept to the plan, and the first 4 miles flew by. Around mile 4, I thought that I felt really good and any bike-to-run tightness was gone. But I decided that I would stick to the 9-9:15 min mile until mile 18, when I would see how I felt at that point. It was great to run by so many EN runners and get/give encouragement. I ran into my brother at mile 10, he was at mile 4. We were both pretty excited to be at this point and both still be moving! The entire time during the run, I had an awesome attitude. I kept thinking, “I’m halfway through the marathon at an IRONMAN!!” Instead of counting down the miles, I kept thinking, “I need to enjoy this, b/c there is only 10 miles left…9 miles left.” At mile 16, I looked around and realized that EVERYONE around me was walking. I was still keeping my 9-10 minute pace. I still felt pretty good at mile 18, but Observatory Hill was coming up, so I decided to wait until after the hill to see if I should speed up. About mile 20, I felt great, but look at my watch, I was on pace to finish the marathon around 4:15. At that pace, I should finish around 12:15, b/c when I left T2, the clock said 8 hours. What I didn’t know at the time was that this clock reflected the pro start, ten minutes earlier. So the time was actually 7:50 when I started the run. So I thought, if I speed up now I could make up a few minutes, but I can’t make up 15 minutes, at least not at this point in the day. So I made a choice just to enjoy the last 10k of the run, and not worry about where I finished. In the back of my mind, I thought about how Coach Rich said, if you don’t hit the line at mile 18 then it will come at mile 22. If I had known that I was on pace for 12:05, my thinking would have been much different. However, I kept going and hit the turn around on the bike path by University bay. At that turn around, I knew I was heading back to the Finish Line. Right after that turn around is mile 22. At that point, I was so excited that I was about to finish my First IRONMAN, I couldn’t think about anything else! I ran past my brother for the last time at mile 23 and asked him how he was doing. He answered, “Not Great!” but he said it in a really happy way, so everyone around us started laughing. He only had about 10 more miles to go. So I kept running, until I hit the Capital, and that’s when I sped up a little bit. I was so excited! I was grinning ear to ear by the time I hit the chute! I was high fiving anyone that had their hand near the fence! I slowed down just a little bit to soak in Mike Riley calling out, “Scott Carty from Plymouth, MI, 33 year old First Timer, How’s it sound, Scott? You are an Ironman!”

So after I finished, my family told me that my brother, who I had seen 3x on the run, had crashed pretty badly on the bike. He took the hill on Garfoot too fast and was really hurt. I was shocked, b/c I didn’t notice it at all. After the race, I got to see how bloody his back was and the fist-size chunk that was missing in his helmet from where his head hit the ground. He’s very lucky, b/c the woman who crashed before him on the same hill broke her collar bone. God was definitely watching over him. I’m very proud of him for getting up and finishing after something like that! I put a pic of his back as an attachment!

A huge thank you to RnP and all the EN Folks that gave me advice over the weekend! I had so much fun! I loved getting to know all of you!

Please listen to Scott’s interview with Coach Rich below