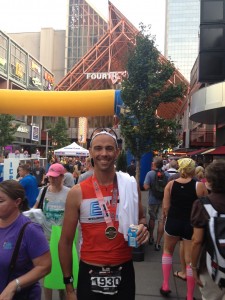 This Just In: Post Race Podcast with Newbie Rob Tagher

I was on the ground for the weekend to support our contingent of 25 athletes for race weekend. With approximately 50% of them being first timers, I spent part of our pre-race dinner focusing on the basics…which I reiterated during the Four Keys talk. And quite a few members had attended our Tri Rally on the Louisville course, so I felt a little more reassured than usual about the race…but then I rode the course on race day and all that went out the window.

From all accounts, the swim was three to five minutes slower than last year. Pro triathlete Chris McDonald confirmed this after the race when he told me that there was just no action during their in-water mass start (the AGs jump in the water in time-trial fashion). As a result, returning competitors were dismayed to see the clock upon their exit from the water.

Despite the time-trial start, there was reportedly some decent contact on the swim. While it wasn’t a melee as in other Ironman® events, anyone signing up should know that IM Louisville doesn’t have a hall pass from typical triathlon swimming shenanigans.

Results showed that the bike was anywhere from ten to fifteen minutes slower than in years past. The weather on the day was clear, unlike the overcast start in 2011. The relative humidity was pretty high as well, but it quickly dropped off by mid-morning. On my own pre-ride of the course, approximately 30 minutes ahead of the PRO field, I felt the humidity but knew to drink at least two bottles per hour. I noted that the town of La Grange was unusually quiet and returning racers confirmed that the presence out there was markedly less than in years past.

The biggest changes I noted from the previous two days of riding the course was a slight headwind when turning onto 42 to begin the 33 mile trip back to Louisville. If you can divide this part of the course into thirds, the first section is still rough and rolling; the second section is slightly better and a little less rolling, and the final piece is flat, smooth and fast.

But the headwind made this section slower and hotter for competitors, and since the first third is part of the loop, they were to face approximately 45 miles of some form of headwind. For athletes with a poor bike fit or poor pacing, this was really going to be their undoing.

In addition to the pressure of the headwind and no convenience store stop at mile 45 (it was closed!), I got a flat tire at about mile 52: a tack in the middle of nowhere. A brand new tack, right out of the box. I found a few more on the road and kicked them to the side. Talking after the race with our Team, I heard that there were quite a few flats in that section, consistent with someone out to cause some real harm.

Already fifteen to twenty minutes slower than usual, competitors were faced with another hot Kentucky day to run. The course is relatively unforgiving in terms of how you run relatively straight all day with minimal opportunities for shade. Early on in the field the effect of the heat was very visible on the faster competitors, and this was confirmed as the age group ranks began making their way out.

By the time it was 6pm (11 hours into the race), the vast majority of folks at mile marker 6/10 and 18/22 were walking. Women seemed to be faring better than the men, and the occasional breeze brought significant relief.

While Louisville isn’t the most technical or challenging course on the Ironman® circuit, it demands that you race with your “A” game. You have to be ready to change your nutrition plans, your pacing strategy, your goals…all on the fly. If you don’t have the answers to the day, the race will have one for you…and odds are you won’t like it!

I was pleased to see better traffic management on / around River Road by the organizers. IM Louisville has significant on course traffic issues every year, from racing on open roads for much of 42 (yes traffic in both directions) to congestion in La Grange with the Sunday Church crowd. There was still some issues in La Grange with cars backed up and even a car crash/altercation between two folks who were tired of waiting.

Hanging out at the finish line was great as I got to see quite a few Team EN athletes and their very proud families. My day came to a very exciting conclusion when one of the spectators eating at the same restaurant as me started choking…after a few unsuccessful back blows I turned him around and did some form of the Heimlich maneuver. Eight compressions later he threw up all over the floor (and my foot), gave me a high five for saving his life…and went right back to talking on the phone. Unbelievable.

So now you know Louisville has something for everyone, regardless of ability level or persuasion. If you are looking to race next year, be sure to do some more research for our articles online and consider training with one of our Ironman® Training Plans or Become a Team Member.