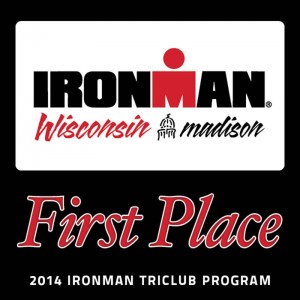 2014 was the 13th running of the event and my 12th race weekend in Ironman® Wisconsin, after having raced Wisconsin 3x and done my coaching thing for 9 additional trips to Madison. I’ve also conducted 10 training camps on the course, visiting Madison twice a year every year since 2002. As you can imagine, this has always been a special event for me and I’d like to share the weekend with you, our readers:

On the Thursday of every Ironman® weekend we organize and host a team dinner for our squad — a chance for the members and their families to meet the coaches and each other. We began this tradition in 2008 at Madison and we’ve carried it forwards for every US Ironman, routinely having 30-100+ athletes and family members joining us in a fun, social setting…but we have strict rules:

The Team met at 8am for a recon swim and team picture, and then I relocated over to the Overture Center for the Arts to set up everything for my Four Keys Talk.

We had nearly 200 athletes RSVP’d to the talk. Thankfully our athletes chipped in to ensure that everyone was properly registered and received a FREE Four Keys DVD.

Go here for our complete schedule of Four Keys Talks
About 160 athletes joined me for the talk, during which I delivered our Four Keys of Race Execution and then broke this down into how to race the Wisconsin course specifically. I’ve been doing this talk by the swim start or just outside the terrace since 2003 so very special for me to be able to deliver talk in such an awesome venue, complete with Powerpoint presentation and sound system.

We videotaped the talk, to be added to our growing library of members-only content.

In my opinion, Madison is the best Ironman host city in the US, especially when the Badgers are in town for a home game! I had an awesome 8:30am run through campus, dodging tailgaters and already-drinking college kids.

In the afternoon I stationed myself near the entrance to bike check in for about two hours, to answer questions, perform my mandatory Coach Rich Tech Inspection, and ensure that all Endurance Nation athletes were clear on their instructions to ride in the 53-11 for the first 30 miles. Pro Tip!

At 6:10am I took the Endurance Nation Double Top Secret Stairs to the back of the terrace, to get everyones’ minds right, and for our team picture at 6:30a sharp. 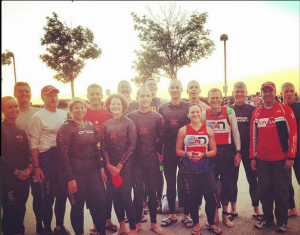 Athletes had near perfect conditions for the swim: not quite as cool as predicted and no to very little wind. 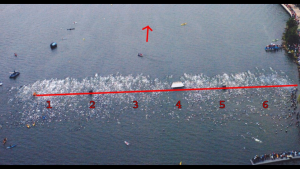 Note that the ski ramp continues to be the best place to line up.

Next, I drove out to my normal bike course spectating spot on Old Sauk Trail, the first of the “Three Bitches.” The vibe was terrific, with a bit more spectators than last year.

The hill also very instructive in how we teach our athletes to ride hills, especially after about 12pm, when the pointy end is lapping the back end and there is a wide mix of athlete abilities and execution skills. Please read our “Riding Steady” blog posts here.

Even more instructive is walking back to the car parked on Cleveland, as you can see many, many athletes completely shut down their effort within feet of cresting the hill, giving up a huge opportunity to carry that speed forward into the course.

For the run, I positioned myself at the top of State Street, by the capitol, where my EN athlete script is:

Temperatures were a little higher than predicted, particularly in the sun. However, Endurance Nation athletes prevailed, posting many 45′ to 2hr PR’s and great performances from our first timers and vets, including Wendy Watson’s 3rd in W60-64 for her first Ironman (!), and Skip Stanton’s Kona qualifying 2nd place in M60-64!

As I’ve said, Ironman Wisconsin has always been a very special event for me. So special that I decided, at the bar of the Great Dane in the Madison airport, to bust out the Mac and register for 2015. See you next year!