The weather was pretty darn good for a race.  The ocean had some good current and swells that made the swim a few minutes slow but nothing too bad.  The winds on the bike stayed fairly low and at times we had cloud cover for a bit of relief from the sun.  It did get warm on the bike it reached 86*.  But after the weather at Arizona 2010, and IMSTG 2012, this was paradise.

The swim was rough.  I started about 75 yards to the right of the buoy line around mid-way back.  The weird thing is they did not recall people onto the beach prior to starting.  So half of the field was standing on the beach waiting for the “beach start”, and some people were in chest deep.  When they announced 90 seconds to go and had not recalled everyone I made my way out to the thigh deep water.  The first .75 mile of the swim is like bumper boats.  It was the roughest swim I’ve ever had in a race.  I got kicked hard in the race 4 times! I’m pretty sure I bit a chunk out of someone’s heel.  Sorry about that.  I also got the normal amount of leg pulls and people hitting me in the head.  The kicks to the face are the only part that bothered me.  I had to make a change for lap 2.  Lap 2 I entered the water inside the buoy line and swam inside the whole way except for when I ducted under the turn buoys.  It was a few minutes slower on the clock (but it also includes both runs on the beach).   Either way I’d make that decision again.

T-1 was crowded when I got there but I found a place to sit.  I didn’t get a volunteer to help but no big deal.  I did slow down and pause for a few deep breaths.  And off I went.

My key metrics for pacing the bike are power and heart rate. I rely mostly on power and cross check it with heart rate and feel.  My plan was to ride at 65% of threshold for the first 90’ then pick it up to race effort of 70%. I decided after about 20 miles and then again later down the road I didn’t need to bike as hard as I had been planning to ride.  I was riding fast and knew that the winds and heat would pick up later with a marathon still coming.  The red line is my heart rate on the graph above.  It took a while for it to drop after the swim and T-1 which is normal.  Then I kept it low and it climbed to an average of 143 bpm.  My normalized power for the entire ride ended up being 160 watts and I had planned on riding 188.  It was lower by choice, the ride felt crazy easy.  I averaged 60.3% of my threshold not my 70%.  My VI was 1.03 and a TSS of only 192.5! I knew I had undercooked the bike but I planned on cashing it in on the marathon.  My power build throughout the highlighted section of the graph is my peak 60’ output.   I finished the bike feeling good about the things to come.

I drank only Ironman® Perform continuously throughout the ride.  I ate Powerbar gels without caffeine, 1 per 30 minutes.  I also supplemented a Succeed S Cap salt pill taking about 1 per hour.  I didn’t track the exact amount of Perform I drank but based off of training in those temperatures I guess I consumed 35 ounces per hour.

It is a lot to consume but it works wonders.  I do burp and struggle to keep it all down.  The calories and carbs seem high but the carbs are different types and are absorbed well.  The best thing I notice with this plan is a steady blood sugar throughout the ride.  I stay even keeled mentally and it helps to enable me to make smart decisions while riding.  It’s a keeper, but must be trained in all workouts.

During the ride I passed 616 people riding easy! I was ready to run and I knew that some of the racers in front of me had ruined their day by over biking (because most do). 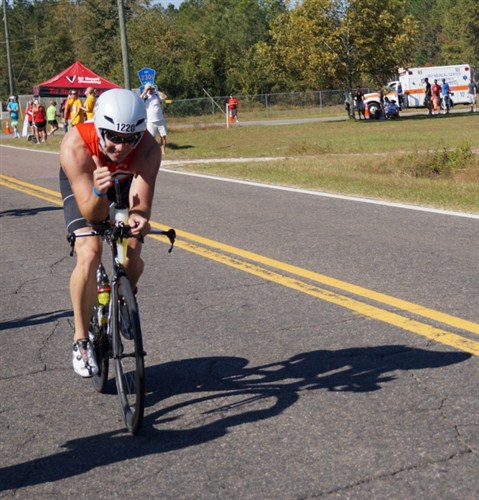 T-2 was more roomy than T-1.  I keep it relatively short; the 3:45 included a bathroom break and a stop for suntan lotion.  Comfort is a key in a long day.

My run went well.  I did have to wing it a bit on the nutrition side.  I did not want to eat the stuff that I had brought, but I was fortunate enough to be carrying a bike bottle with me.  The bottle was great because at aid stations I could fill it and drink as much as I wanted while running.  In the beginning miles I was drinking Perform out of the bottle, and eating ice.  Later around mile 12 I switched to coke and water.  Coke is amazing in a race.  For the rest of the run it was coke, water, ice, and S Caps.  I fueled based on feel.  I am happy with my nutrition on the run.

My pace for the first 2 miles looks slow because I had to make a pit stop just before mile 2.  Once again it is better to run comfortable.  I held my heart rate (red line) in check but my pace (blue line) was a little slower than I would like.  I just kept thinking about racing the last 10k.  My pace dropped along with my heart rate between miles 12-19.55.  I would have liked to hold my heart rate and pace constant throughout that stretch, but at the time I was not sure if I could hold it together.  It turns out I did.  Being able to mentally focus during the last 10k was amazing.  I had my fastest miles at the end of the race!  I flew by so many people the last 10k I thought I was running at 5 minute mile, but they were more like 7:30 at times.  During the run passed another 121 people overall, 8 of which were in my age group!  I did find a new level of hurt in the last 8 miles but I think it is necessary to finish strong.  Hopefully someday I can make it hurt more and go faster. 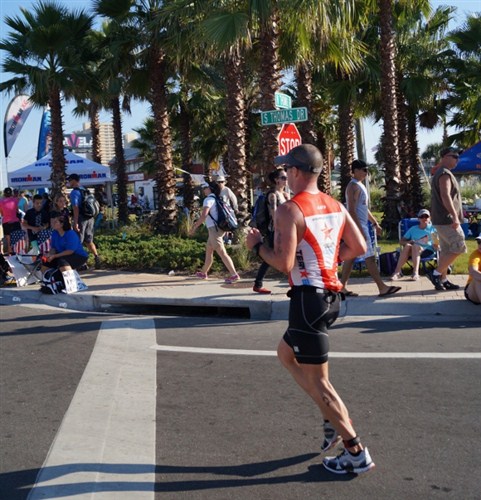 This was a great race.  It was really fun doing it with friends on the course.  Joe and Tim were great to race with as well as the whole Endurance Nation team.  The crowd support on course was better than I remembered it from 2009.  Being Ironman® number 4 I am starting to figure out how to race these.  A special thanks goes out to EN for their execution tactics.  I think I raced conservatively until mile 19 of the marathon and I had a successful day. I’ll take a 66 minute PR any day.  Did I leave time on the bike course? Yes I did.  If I went harder on the bike how would it have affected my run? Who knows there’s only one way to find out.  I will continue to put in the work on the bike, run, and body composition.  My swim and long running will be put on hold for the winter and the beginning of flight school.  I feel like I need some personalized swim coaching to improve my times in the water.  More laps are probably not the answer.  My limiting factor is technique not fitness.  The bike always shows room for improvement.  My run as well.  I’d like to race my next IM at 155-160 lbs.  I have to reshape some body parts and clean up my diet to make that my natural weight.  It’s a long term journey but I’m getting closer.  Sub 10 is the next stop I guess.  I’d also like to focus on 70.3® distance racing for a while during flight school and maybe podium at a big time race.

Thanks for the support it was a great time seeing everyone on course.