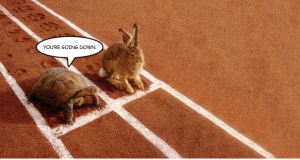 In Part 1 we introduced you to the concept of “riding steady.” In Part 2 we discuss the application of this to your triathlon training and racing.

Racing: we want you to race as we’ve described in Part 1. Easy to understand why.

Learning the Skill of Riding Steady

Ensure you have enough gears on your bike for the terrain you train and race on. Generally speaking, MUCH of the surginess of a given ride is often the result of not having enough gears. This drops you into low cadences you’re not used to/don’t like, so you spike the watts to push against this.

Very simply — look at the dial and don’t surge! You have a monitor on your stem. That stem tells you what you’re doing. You should know what you’re supposed to do, ie, what watts you’re supposed to stick to. When you look at the dial and see stupid numbers…stop being stupid! Having enough gears on your bike to maintain a comfortable cadence across a range of terrain will certainly help you to not surge or spike your watts.

But the most important tool is just increased awareness. After years and years of riding with power, when we are trying to ride steady, our eyes just lock into the monitor on hills, downhills, head, tailwinds, standing, etc. The nets it that we NEVER put out watts that we don’t want to. Our goal is to make zero mistakes, to mistakenly toss out watts that we didn’t mean to.

Pay attention to the pressure on the soles of your feet: