This year Coach Rich conducted a training camp on the course of the Tour of California…during the race! This dynamic makes for one of the most unique training camp experiences you find. In this series of posts, Rich will give you his Stage by Stage report of the camp.

This was my 6th running of the Tour of California Training Camp, after a brief hiatus in ’12-14. This year was our best ever and I’m exited to add this extremely unique week to our training camp offerings!

So to set the stage for you on the admin footprint of the camp:

And of course, Riley the WunderPup, the Official EN Mascot!

As you can see this is a TON of moving parts and we haven’t even begun to ride our bikes yet!

My garage, without even half the bikes in this camp 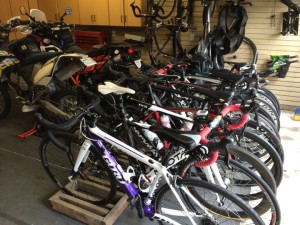 Xavier, my best find of the camp! I ran into him at the top of one our local climbs and hit him up about his van, as I have a total Sprinter mancrush. While descending behind him I started to do the math on the number of bikes he could transport, got his card, and he signed on for the camp. HUGE asset for us! 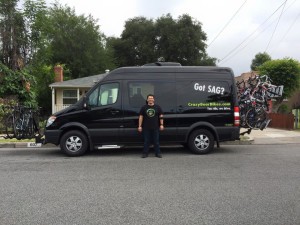 So on Saturday, all three vans left my house for the ~8hr drive to Sacramento with all of the bikes and SoCal locals. The drive was largely uneventful and the entire camp came together at the Holiday Inn Express in Sacramento, with many of the campers having been picked up and shuttled to the hotel by TeamEN member and Sacramento Local Bob Nelson and his wife Christie! So awesome! We had our first camp dinner at the Old Spaghetti Factory, where I briefed the crew on how the camp was going to work, set expectations, and generally prepared them for a very, very busy week of incredible riding! 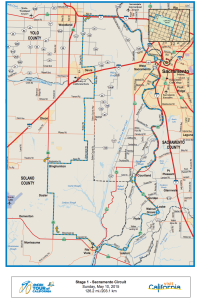 Campers at the beginning of Day 1 of riding 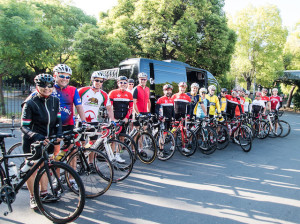 My plan was to finish our riding in Davis, giving us about an 90-95 mile day. Zero reason to ride the roads from Davis to Sacramento. We left the hotel as a consolidated camp, with Bob getting us to the course on River Road, where the seat belt light was turned off and the campers were free to move about the cabin. The themes for the first half of the day were:

As you can imagine, rough pavement and strong winds made it tough to settle into organized group riding but I was very surprised at just how well the majority of the campers did. I knew it would only get better across the week and I took this as a very good sign for how the camp was going to go. 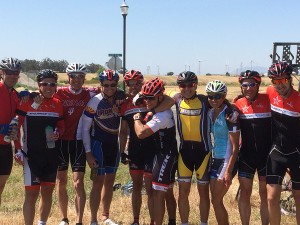 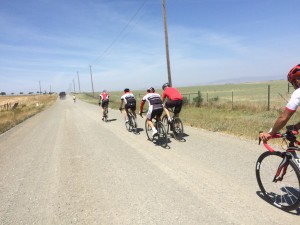 A-Group consolidating at the end of the dirt road, after the B-group passed through to get some distance on us. 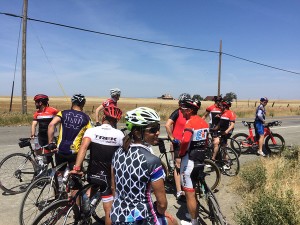 During the ride we contested for Sprint finishes…and Feed Zone finishes, and since there was no official sprint line in Davis we decided the Davis city limits sign would be the Official EN ToC Stage 1 finish. So we began looking for high buildings on the horizon telling us we were getting closer but we all targeted on the water tower in the distance. I forget who took the sprint but we finished our ride a couple blocks later in a grocery store parking lot, where we loaded up, fueled up, watched the race roll through and then got on the road to our next town of Grass Valley, about 90′ away.

Joanne swung the cargo van by the airport to pick up Steph Stevens, who had raced IMSG the weekend before, then a Ragnar event in Boston on Fri and Saturday (I think) before flying out to Sacramento to meet us on Sunday. And Steph lives in the Denver area so do the math on that week!