Why You’ll Never Succeed By Taking Time "Off" Each Year: OUTseason vs. OFFSeason 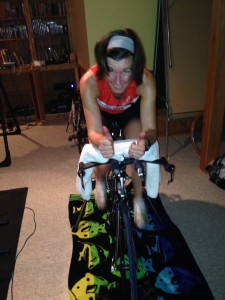 What is “time off’ for the Type A triathlete after a long, arduous season with several key races and many other training events? Many will “relax” by doing a Marathon (or four, on back-to-back-to-back-to-back days!); or maybe they will compete in some kind of 24-hour run relay (Reach the Beach, anyone?); or perhaps they’ll pick up some kind of ultra running event for fun. My point is: many triathletes don’t actually take time off—they just spend time doing training that doesn’t advance their “in season” goals of triathlon improvement.

Odds Are You Won’t Stop Until You Are Injured

The most common “entry” story to triathlon is of someone—stop me if you’ve heard this before—who got into running but then injured himself and then needed to cross train instead. In other words, the vast majority of triathletes are people who did so much running they got hurt, so they picked up a sport that let them do a lot more training without so much running.

It’s like giving halloween candy to sugar addicts all year instead of just one night. What do you think will happen? They eat until they puke! Or in your case, you train until you get injured (again) and need to take another break.

We Have Totally Tricked Our Customers

By calling it the OUTSeason, instead of the OFFSeason, our athletes understand they are actually still training with purpose, on a schedule, with the intent of improving their racing results in-season. It’s equal parts re-branding and re-directing.

We have managed to take a typical six-month training window and extend it to nine-months, giving us more time to help you improve. Race day isn’t about luck, it’s about countless hours of quality training that builds across a year to have you ready on the big day. We start that work in the OutSeason.

There Is Nothing Easy About the OutSeason

The term “Offseason” implies some kind of down time, or time off. Most triathletes and triathlon coaches fill this winter period with aerobic training at a level that does very little to improve fitness or advance your annual goals. We prefer to take more significant down time at the end of the year, complete time off, before engaging in the quality, focused training of the OutSeason® that sets the physical fitness tone for your season.

What is the OutSeason? FAST then FAR

The OutSeason® averages between six and eight hours of training per week, with zero swimming. There are two days off. Because you are not “InSeason,” there is no longer a requirement to build your endurance towards your goal race distance. And you probably don’t need to “build your base” either…because that’s what you’ve been doing all season, training and racing triathlons!

Instead, we leverage this base from the previous season to drop your training volume significantly, freeing up recovery resources to help you absorb the low-volume, high-intensity work that makes you faster. In the OutSeason® we build your FAST while your competition enjoys their “OffSeason.”

When you emerge in the spring, you are significantly faster than your last-season self, so we begin to build endurance—FAR—on top of this much-faster-you. Your “OffSeason” competition has given you a significant head start and is forced to play catch up all season long.

Sound contrarian? It is, no doubt. But since 2007 over 5,000 TeamEN athletes and training plan customers have used this “FAST then FAR” approach to achieve 10-15% Functional Threshold Power gains on the bike, and 1:45- to 2:30-minute 10k running personal bests, on only 5 to 8 hours of training and two days off per week. These increased speeds at the exit of the OutSeason® create the many, many personal bests we’ve shared with you through our athletes’ race reports and testimonials.

Don’t waste another winter spinning in Zone 1 or chasing marathon medals fashioned of cartoon characters. If you want to be successful next year, you need to start training like it.