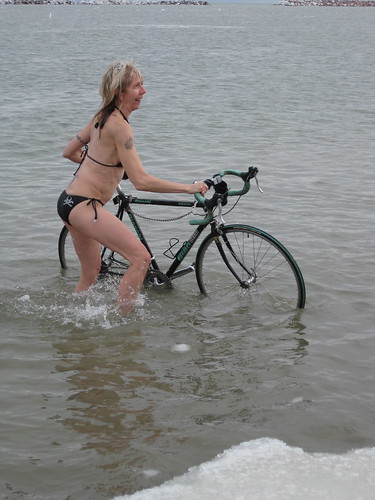 Attention Triathletes: Do Everything You Can to Avoid Swimming This Winter

If you are like me, you don’t like to wait. We live in an on-demand world, and nowhere is this more true than in the realm of our performance, where we seek out incremental speed gains by dropping cash on wheels and carbon widgets. If you are planning on being faster next season, and are ready to do the work to get there, here’s the single best tip we can give you this winter: Stop Swimming.

Swimming in the winter is the fitness equivalent of voluntarily waiting in a really loooooong line at the post office.

You are effectively saying some version of the following:

Training Isn’t Complicated: If you want to be fast, you have to train fast.

Since 2007 we have helped over 5,000 triathletes build the baseline strength and speed over the winter months that has carried them to personal best performances during the regular season. Let’s take a closer look at our No Swim Policy and what it means for you.

Think about it: 30 minutes drive + change, 60 minute swim, 30 minutes change + drive. Do this three times across a week and your 6 hours of time is only netting you 3 hours of training. Contrast this with a bike or run session from your house (or in your basement) where an hour long workout takes just that — an hour.

But it gets more challenging. Most swimming pools aren’t open at “regular” hours that fit our basic schedule. Most triathletes have to be at the pool between 5-7 in the morning to get in their swim, meaning an early morning wake up call and reduced sleep at night.

The real rub on swimming? Swimming is a technique-oriented endeavor. For most of us triathletes, proper swimming is about 80% technique and 20% fitness. This makes it incredibly muscle-memory dependent — meaning that unless you are a human rock in the water, your swim time is much better invested closer to your actual race season — when you can build your skills and fitness and then put them directly into a race.

Real Swimmers Don’t Have It Better

True swimmers have been in the water since age 5. By the time they are 20, they have been putting in 25, 50, even 75,000 yards per week! They have swum more in the first 15 years of their career than you or I could ever hope (or want!) to, given our jobs, lives, and multisport focus.

But at the end of the day, those 15 years of swimming might earn them a 55 minute Ironman® Swim…maybe only 10 to 15 minutes ahead of you. You can make that up with a solid bike and a smart run…and you got to watch all those episodes of the Smurfs and the A-Team while they were swimming away their youth.

Everyone has their own reasons for swimming, and we certainly respect that. Outside of it being a powerful social activity, there is no real reason to suffer through the winter and miss out on better bike and run training.

#1 — Social Butterfly: If swimming is the only place you get to hang out with and get your tri-mojo, then cut that back to 1x a week in the winter. Think about it…if you save the other 4 hours, you could get stuff done and then actually have time to go out for a social night!

#2 — The Ambitious Upstart: After one year of racing, you are ready to pour your heart and soul into getting better. You have figured out how to squeeze the most time out of your week by cutting back on social stuff, curtailing family time and leveraging the trust of your employer to be a bit late (or leave early)…combined with a few well-placed sick days, you are ready to train 20 hours a week for the next 8 months….YEAH!

With an IM swim time is slower than a 1:15, you aren’t a rock but you do need to focus on swimming. Don’t waste the better part of your winter in the pool…get faster on the bike and run while you research a good 1:1 swim coach in the area and plan on starting your “real” tri season in the spring with a few good weeks of multiple 1:1 sessions. Done.

#3 — The Rock: Yes, you. You are a great athlete, able to defy gravity on the bike and the run…but there’s something about the water that makes it your personal kryptonite. You are the sole exception to PSA #132 — you can start to work on your swim stroke.

That said, instead of signing up for a masters program with tons of hours but little personal attention, we suggest you find a swimming workshop (think Total Immersion) that will get you the fundamentals.

Then put those into practice 2x a week during the winter…keep the sessions to technique only so these days are very similar to a day off. When the season is nearing, you can begin to look at the guidance for the Ambitious Upstart listed above.

We launched the “No Winter Swimming” policy with our 2007 OutSeason® training plans to a great deal of buzz. A triathlon coaching company who say don’t swim…people thought we were pretty crazy. We had to do a lot of damage control, as folks assumed we meant never, ever swim (not true)…and we even capitulated and now offer swim workouts and our swim ebook with all of our triathlon training plans, even the winter OutSeason® plans. As the results trickled in from the 2008 season, we saw athlete after athlete who took 14 to 20 weeks off from swimming and swam just about the same speed as the previous year.

The real rub, however, was that these folks had taken their newly found free time and used it to recover better and get stronger on the bike and the run. The net being a season full of PR performances ranging from 10 minutes to almost three hours!

This cycle has since repeated itself every winter, with a new host of Team EN athletes taking the no swim pledge and making the most of their focused winter training.

If you are interested in taking your triathlon game to the next level, and know that swimming 5k three times a week in January for a September Ironman® event just ain’t right, then please check out our OutSeason® Training Plans here.

Please take the Endurance Nation FREE five-part “Rethinking the OutSeason” Email Seminar. We’ll cover these topics above in much greater detail while also teaching you the basics of training with power, pace, annual scheduling, and much more. Join the more than 5,000 athletes who have benefitted from the EN approach to winter training!

Yes, I Want To Get Faster This Winter!