All Things Hills, for Triathletes, Part I: Training 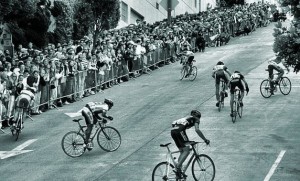 Not matter where you live, it’s likely that with enough time in the sport you will encounter hilly terrain in either your training or racing. Hills can be fun, challenging, and create opportunities for you to excel on race day. In Part I we’ll introduce you to training on hills before turning our attention to racing well in hilly terrain in Part II.

Training on Hills: The Bike

Higher work output at a reduced mental cost
When the road starts to go up nearly everyone just naturally increases their effort, riding harder than they were on the flats. And this harder riding is nearly always accompanied by a lower rate of perceived exertion (RPE) than that same effort on the flats. The net is that hills are a venue in which you can often crank out more watts than you can on the flats at the same or reduced mental cost.

Lower speed = increased safety
It’s often very difficult to find a venue where you can safely crank out 12-20 minute tempo efforts that yield speeds of 20-25mph. But that same (or greater) effort applied on a hill results in much lower speeds and therefore increased safety.

Watts per Kilo
Climbing faster on a bike is largely about increasing your power to weight ratio: get stronger, get lighter, or do both simultaneously. So hills are a great venue for keeping us focused on our fitness and body composition goals:

The net is that training regularly on hills, especially on the same hill(s) week after week, creates a constant reminder to address your body composition and fitness goals simultaneously. And if you have a powermeter on your bike you can always calculate your actual watts per kilo*, assigning a hard number to your current fitness and body composition, and track you improvement over time towards a specific watts per kilo goal. Add in a tool like Strava, with the ability to create custom segments and track your performance against yourself and others, and you have a range of fun options to keep you accountable towards your goals.

Training on Hills: The Run

Less Pounding for the Same Effort
Next, your body experiences much less pounding for this higher effort up a hill than it does for the same effort on flat ground. Less pounding = fewer overuse injuries = more consistent training, a very good thing.

(Smart, Moderate) Downhill Running Builds Durability
What comes up must come down and smart, and controlled downhill running can be used to deliver a great deal of stress to your legs, increasing their durability — their resistance to becoming sore and fatigued in the final miles of a triathlon run. The key is controlled:

Body Composition Improvements Yield Increased Speed on Hills
Our watts per kilo observations on the bike above are also true on the run, with the difference being that we’re not able to assign a hard watts per kilo number to your run. However, regularly running the same hills or hilly courses, and tracking your progress in Strava or other logging sites, can be powerful tools to help you maintain accountability towards your running fitness and body composition goals.

Finally, one significant characteristic of both running and cycling in hilly terrain is your body’s delayed heart rate response to increased effort. It may take your heart rate 60 to 90 seconds to rise into the training zones that truly represents your effort. This may be longer than the length of the hill and/or can make it rather difficult to manage your effort on a hill, especially if you do not have realtime power (on the bike) or pace (on the run).

This delayed heart rate response has significant implications for racing in hills, which we cover in detail in Part II here.

We’d love to hear from you: tell us in the comments section below how you use hills in your training!

*Watts per Kilo: standard convention is to take your Functional Threshold Power and divide that by your body weight in kilos. Do not include the weight of the bicycle.