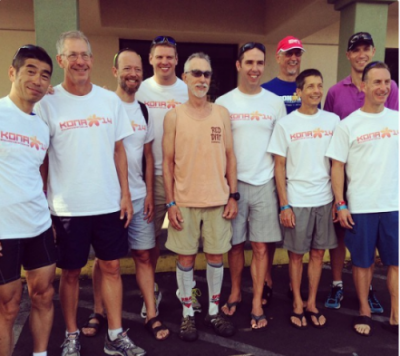 TeamEN at the 2014 Ironman World Championships

DON’T Have an OffSeason

In our experience and observation, once you give yourself permission to be “off,” this starts a cascade of counterproductive effects that will significantly impact your performance next season. Specifically, having an OffSeason gives you explicit permission to tear down many of the gains you’ve made all year, forcing you to begin the rebuilding process at some point. After two weeks of inactivity, things start to go backwards! Instead…

Specifically, the requirement that you maintain a level of endurance to meet the demands of triathlon racing, especially long course, is removed, creating an extremely valuable opportunity to focus your energies on other fitness components.

DON’T Build Your Base

That fitness you’ve worked so hard to build all year? That is your base! You don’t need to build it because you’ve already got it.

More importantly, a proper base is one that’s built through season after season of consistent training, not the stop/start, build/lose/rebuild cycle created by giving yourself permission to have an OffSeason. Instead…

Take that excellent aerobic fitness and durability that you have, right now, and leverage it to make yourself very, very fast.

Forget triathlon, forget the requirement to build the fitness to swim, bike, and run 70.3 or 140.6 miles. Instead, become a 5k, 10k, and/or half marathon runner, and 40k time trial cyclist.

DON’T Jump on the Ben and Jerry’s Short Bus

“Hey October Timmy, this is January Timmy. I just want to thank you for forgetting all of the great work we did all year to lose the pounds and instead giving them all, and then some, back to me at the start of the year. It’s soooo awesome to start the season with zero fitness AND with a 20lb sack of rocks on my back. You’re the best ever!” Instead…

Develop the habit of eating better and logging your diet against your exercise. Yes, I know it’s the season of pumpkin pie, holiday parties, nachos, and the NFL. But what better time than now to be thinking about this and working to develop good habits that will carry over into your next season! Or at least just do the best you can!

You don’t need to build your endurance through volume. That won’t become a requirement until usually March or April of next year, at the earliest. Track the workouts, for sure, but don’t get hung up on totals. Instead…

DO Set a Training Volume Ceiling

Give yourself a total training volume number that you will not exceed for any reason. The OutSeason® training plan our members will begin on October 31, 2016 only has 4-7 hours of total training scheduled per week, and includes two full days off, per week. More importantly, this low volume frees up recovery resources so they can absorb the make-me-faster intensity that we have scheduled for them.

If you’re typical of most age group triathletes, you are much more limited by your technique than by your swimming fitness. And swimming fitness can be better created closer to your races next season, beginning 14-20 weeks out. Instead…

DO Seek Out Swim Technique Help, if Needed

If you do decide to swim in the OutSeason® (we don’t prescribe any required swimming for our Team during their 14 week OutSeason®), we recommend you seek out an experienced local swim coach who can help you improve your technique. Think piano teacher vs personal trainer.

W guarantee that at some point this winter, someone will post on Facebook that they did a 4-6 horr trainer ride, in January, “building their base” for their race…in September. Do not be That Guy! Instead…

Insert butt on saddle, go very, very hard, and get off. Your objective is to cram work into your body, not time.

DO NOT Buy Race Wheels and Other Fancy Stuff

Just say no to the Christmas sales promising seconds (seconds!!) of time savings to be had through the purchase of this or that aero carbon kit. Instead…

DO Buy a Powermeter

If you’re about to drop 1-2 thousand dollars on a set of wheels, our advice is that a powermeter is a much better training and racing investment.

And the OutSeason® is the best time of year to learn how to train with, as the preferred style of training (see benchpress above) is so simple and interval-based, and you can focus on learning how to use your powermeter as a training tool. These lessons will then be applied to learning how to race with a powermeter next season.

It’s extremely common for triathletes not satisfied with their running performance to train for and race a winter to early spring marathon. In our experience, the reason why you didn’t run as fast as you wanted to this season was probably because (1) you weren’t that fast (or, rather, we can all stand to be faster) and/or (2) you executed poorly on race day.

Running a marathon is not the best solution to making you a faster runner. And it absolutely compromises your opportunities to make you a faster cyclist. Instead…

DO Run Everything Else

We make our athletes faster short course, half and full distance triathletes next season by making them faster 5k, 10k, and half marathon runners in the OutSeason®.

A very simple progression would be the 5k Turkey Trot in November, that local holiday 10k in December, and those January or February half marathons to close out your OutSeason®.

Use your local running scene to put training targets and racing benchmarks on your calendar, maintaining your motivation and accountability within a rolling 4-6 week window.

DON’T Be Limited by Heart Rate

You don’t need to punch the clock for endless hours at that magical, fat-burning Zone 1 effort (Hint: it’s really not that magical). Remember, you already have an excellent aerobic base. Instead…

DO Learn to Train with Pace

Get Santa to bring you a GPS watch early (XMas in October??) and use your winter running series above as an opportunity to learn how to train and race with pace rather than heart rate. The lessons and perspectives you learn in the winter will be very valuable in the spring, when you begin to build FAR on top of your FAST.

For months and months it’s been about this race, that race, gotta do this, gotta hit these numbers, etc. It’s also been the It’s All About Me Show, all the time, asking your family and your life to accommodate you, your goals, your training, you, and you. Just. Stop. Instead…

DO Chill, Relax, and Disconnect Your Head from Triathlon Racing

Set a volume ceiling on your training and don’t go above it. Give yourself two complete days off per week. Do the chores, do connect with your family, do get your head out of your triathlon space and back where it needs to be this time of year: with the other much more important areas of your life.

At the end of the day, each of us has a finite number of Headspace and Spousal Approval Units (SAUs) to spend across the season. Spends as few as possible / recharge your balance in the OutSeason®, creating a reserve for next InSeason!

Whaaa? This is Totally Whack!

…and 100% counter to the 15th winter training article I just read in that magazine!!

Yep. But it’s the guidance we’ve been applying since 2007 to thousands of athletes who have achieved the results this year in the image below. We make our athletes FAST while the competition enjoys their OffSeason.

Yes, I Want To Get Faster This Winter!