Here is the official Endurance Nation results update for the week ending on 7/17/2011, and a few from earlier this month.EN had a total of 15 athletes race in a variety triathlons… with over 73% earning a personal best! Congrats to everyone — you can read the full details below.

If you’d like to join our age group members in training to be your best, please Become a Team Member or consider purchasing an Endurance Nation training plan here.

Sam Albrecht raced his first half Ironman® with a finishing time of 5:59:32. He said “Good race, awesome day, felt good for much longer than I expected, and met my goal for the day despite bike problems.  I was very happy with the organization and set-up of this race and would recommend it.” 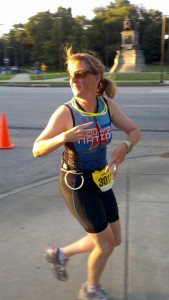 Christy Beal (photo at left) finished this race in 21:51 and said “EN style long runs of just 1h30 minutes in preparation for 25 miles during the relay were spot on. Felt strong for my planned three laps even though this relay was twice as far as I have ever run in one day before. I ended up being the only one on my team capable of picking up a lap for our missing runner. Thank you so much for the charity program donation to Back on My Feet, we raised a total of $1276  Work Works!”  You can read her full race report here.

Ed Shimon raced in this Olympic distance tri and PR’d with a time of 2:21:09 saying “Yet another race distance PR this year! This time the Olympic distance, with a 9 min PR. Crushed the bike with a 24.0 mph ave, 285 Norm Watts, and pounded the run with 7:26/mile. It was a cloudy day so that helped a bit, but I’ll take it! I’m in the best shape of my life, and I have the EN race strategies to apply what I have trained to do. EN training ROCKS!!”

Juan Vergara earned an Olympic distance PR with a finish time of 1:59.  His full race report is available here.

Keri Viehe raced in her first half ironman for a time of 6:18:59.  She said “I was very concerned about the heat, which forced me to be extra diligent about executing a smart race.  I was very pleased with my time given the conditions.  I never blew up on the course, which was my number one goal.  I could not have done that without all the advice that I got from the coaches, podcasts and other members.  I have been a sponge the last 6 months and learned a lot of valuable information.  Thanks EN.”

Matt Aaronson also raced his first half Ironman® and finished in 4:48:48.  Of his racing experience he said “First ever half-iron for me. Couldn’t have gone better! Many thanks to the EN plans, approach and team support.”

Tim Jardeleza PR’d with a time of 5:02:04 and you can read his race report here.

Brian Pautsch raced to a new PR of 6:02.  He said “Racing, biking, power and nutrition strategies were dead on. If I wasn’t injured, I could have easily went 5:50 or better.”

David Lesh also earned a new PR of 4:51:21.  EN members can read his race report here.  He said “The EN plan has been great I finished over an hour better than my old training buddy who started training for triathlons at the same time as I did but is using the traditional LSD method.”

Mark Thoma completed the race in 5:11:56, earning a PR.  He said “After a horrible two weeks leading up to this which nearly had me bail on the event, I had an awesome time.  Due to cracks in the TT bike frame, I used a road bike (no bars either) and had an avg speed of 21.7.  I haven’t a good swim in three weeks and no swimming for two weeks and had a 33minute swim.  I was able to push (painfully) on the run and avg’d 8:23.  Clearly the fitness I had leading up made up for my extended “taper” and I am a believer!”

Peter Carroll raced to a 5:59 finish and members can read his race report here.