Every year since 2007, we’ve conducted a training camp for our members on the Tour of California course. There are camps where you can swim, bike and run a lot…but no other camp puts you ON the course of a pro tour race, riding a couple hours ahead of the peleton — sprint towns and KOM’s with rabid cycling fans cheering you on, mountaintop finishes, numerous opportunities to see the pros up close, and the camaraderie of campers working together to not get rolled up the peleton!

From 2007 to 2009, the race was held in February. Our athletes used the camp as an end-of-the-OutSeason® reward for all of their hard work and to get a huge head start on building their endurance for the long course racing season. Now that the race is in May, campers use the camp as their first or final volume push before their A-races in the summer.

Campers ride Stages 1 thru 7, logging 300-400 miles and 25-30 hours of time on the bike…and did we mention that this is ON the course of a pro tour, WHILE the Tour is happening around them. So very, very cool. We think it’s a testament to the uniqueness of the camp that this year all but 4 of the campers were joining us for their 2nd, 3rd, or 4th ENToC!

Stage 1: South to North Lake Tahoe
We woke up to about 4 inches of…snow!  The Tour hadn’t sorted out it’s plan yet so we drove to North Lake Tahoe to check out the conditions along the route and maybe get in a ride from the top of the bike course loop. But we experienced whiteout conditions and very icy roads for much of the drive. Riding was a no-go and the race ended up cancelling the Stage. Too bad, as everyone was really looking forward to riding around Lake Tahoe but we made the best of it by scoping out the expo. We loaded everyone up and drove to our hotel in Truckee. 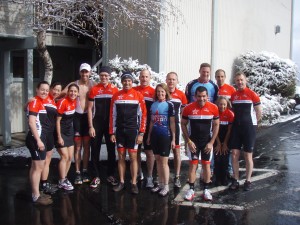 The Campers, ready to ride Stage 1!

The route for Stage 2 was a new one this year, featuring a ride over Donner Pass. However, the pass was snowed in so the race moved the start and route to Nevada City, shortening the stage to about 65 miles to Sacramento. We drove to Nevada City and started our ride from there, stopping in the town of Wheatland to watch the peleton go by before taking our own route to our next hotel in Auburn. While in town waiting for the race we asked some locals for routing recommendations…which ended up being quite hilly! We ended the day with 71 miles, 4:30 ride time, and 7500 ft of gain. 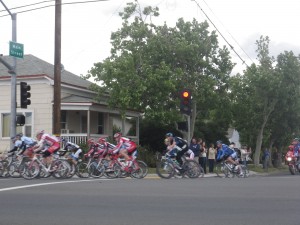 Stage 3: Auburn to Modesto
This was another new route for 2011. The day was mostly flat to rolling into the wind…and then the rain…and then more wind! We grouped the camper into an A-Group of 8 riders and B-Group of 6 riders, each group working very well together to shelter each other from the winds.

Stage 4: Livermore to San Jose
Good weather, finally!! This stage strung together some of the best sections of previous Tours: Mines Rd, Mount Hamilton, the descent from Mt Hamilton to San Jose and, new for the Tour of California, a finish atop Sierra Road. Sierra Road is about 5k at 9-18% grade and has been featured every year of the Tour, but having a stage finish at the top was new for 2011. Highlights: 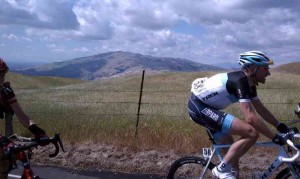 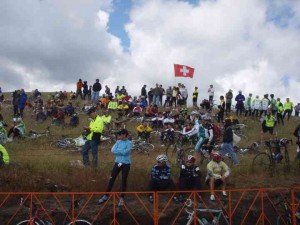 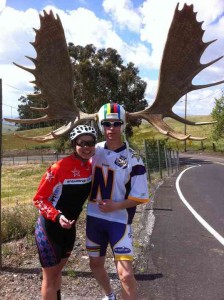 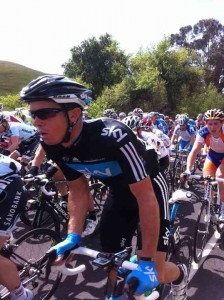 The Autobus, on Sierra Road

Stage 5: Seaside to Paso Robles
The original route for Stage 5 was to ride down the California coast before cutting inland to finish at Paso Robles. However, the heavy rains we had this season washed out a section of the road which, while having been “mostly” repaired, wasn’t up to the task of accommodating the huge vehicle footprint of the Tour, the race changed the route to head inland through Carmel Valley, King City, ride about 20 miles of the Wildflower course (backwards) before finishing in Paso Robles. Rich has ridden all of those roads and while scenic…it isn’t the coast!

So we made an audible and decided to take the campers on about the best ride you can do in California — ride down Pacific Coast Highway from Monterrey and through Big Sur, carrying on south to Naciemento-Furgesson Road. NFR is a little known road that climbs over the Coastal Range — ~2500ft in 7 miles — before descending into the rolling “old California” scenery of Fort Hunter Liggett.

The ride did not disappoint! You may not know it, but the reason why you ride a bike is so you can use your fitness to enjoy the sweeping, scenic views on the PCH from the seat of your bicycle. Every climb, every corner, every descent presents you with new breathtaking scenery. Just as importantly, because we were not being chased by 200 pro cyclists, we could take our time and enjoy ourselves. Campers were able to watch the start in Seaside before rolling out of town at their own pace, enjoy some ice cream in Big Sur, stop for photos along the route, and just enjoy themselves without the pressure of the Tour.

Campers finished the day with ~94 miles and over 8k of gain. A few hardy souls did a quick 6 miles near the vans to make it an even century 🙂 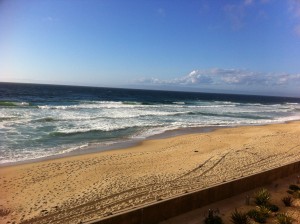 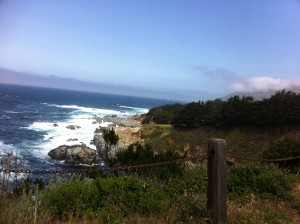 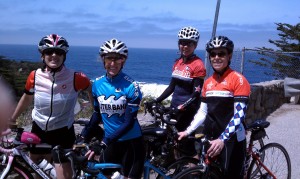 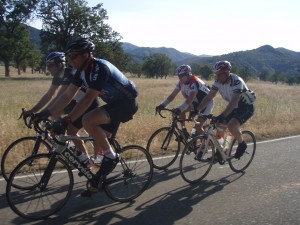 Stage 6: Solvang Time Trial
The Time Trial returned to Solvang this year, where it’s been every year with the exception of 2010. The time trial offers us a much deserved rest day and the opportunity get our pro-tour FanBoy/Gal on, big time! We rolled out of our hotel in Buelton for a leisurely ride of the first half of time trial course (15 miles long, total) before taking an out and back detour into Foxen Canyon. Once back in town we tested our fitness on the course — racing each other through the “Corkscrew” and other technical sections of the time trial course. After quickly changing into their casual clothes the campers were then free to spend the rest of the day eating pastry one of the dozen faux-Danish pastry shops in town, ogle all of the tour bikes, TT set ups, vans, trailers, the expo and the general cycling festival vibe of the event. We ended the day over lamb kebabs, microbrews and a fire on Rich’s deck. 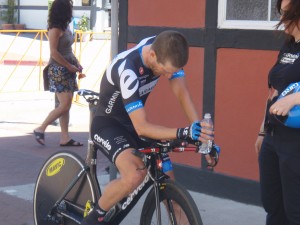 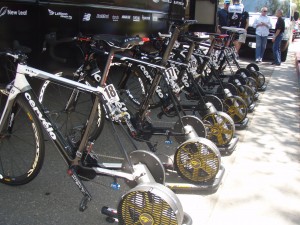 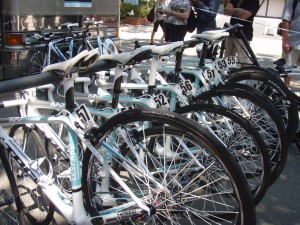 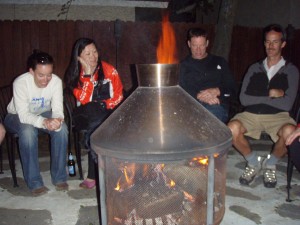 Around the firepit at EN West Coast HQ

Stage 7: Claremont to Mount Baldy
The Queen Stage of the Tour, in Rich’s backyard! Rich rode the course in mid-April, racking up 10,200ft of climbing in 72 miles and 5:15 ride time. This course is legit! We decided to amend the route a bit, so we could see the Tour multiple times and experience the fans along the course, dropping the campers into Mt Baldy Village with enough time climb to the “Mount Baldy Ski Lifts,” a legendary climb in the San Gabriel mountains that features 5 miles at 8-15%, with several 20%+ switchbacks! This is how the day played out: 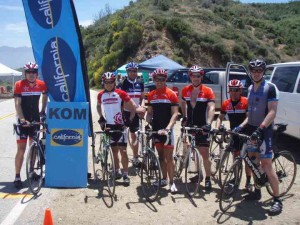 KOM at the top of Glendora Mountain Road 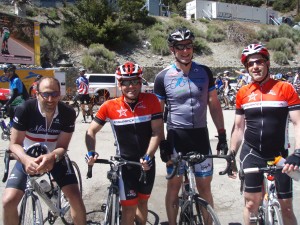 View all of our camp photos here

So much great riding and so many good times sharing the experience with our athletes! We can’t wait for next year!

Interested in joining us for the Tour of California 2013?
Go here to learn more!