On August 29th, almost 20 TeamEN athletes will put months of hard work to the test at Ironman® Louisville. It will be hot, it will be difficult and they will be challenged. But these folks are ready. Let’s take a minute to get to know the people behind the names and bib numbers…it’s a great bunch that we can’t wait to support on race day! 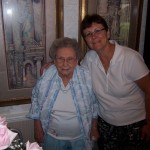 I’m Barb Spitler, a 51 year old triathlete, preparing for my first full IM, in Louisville, KY.  I’m a marathoner, having done 12 thus far; The Great Wall Marathon in China being the most difficult.  I have completed 2 HIM’s (Steelhead) an Olympic distance, and numerous sprint distance races.  My other pursuits include: martial arts, scuba diving, kayaking, hiking, reading, and paranormal research!

This picture is of me and my beautiful Mother, on her 90th birthday in July.  She is a strong woman who has always encouraged me to pursue my dreams.  Completing an Ironman® has been a dream for many years.

As a teacher, I strive to inspire my students to believe in themselves, that they can set goals and accomplish them.  Using myself and my experiences as an example, they look at me through different eyes, and at themselves with possibility.  My favorite quote, that I keep on my chalkboard all year is: “Imagine what you would do if you knew you couldn’t fail.” (Anonymous)
I consider myself so fortunate for having found Endurance Nation, Rich and Patrick, and all of my wonderful teamates who make this truly a triathlon family! 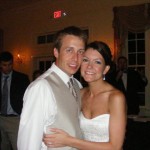 Chad Scott — This has been an exciting year for me! I just recently married (2 months ago) the love of my life and I’m so thankful that she is so supportive in all my training and racing. This will be my 3rd Ironman, I’ve competed in Florida and IMAZ. This particular Ironman® was suppose to be my first Ironman® about 4 years ago, however, due to injury’s I was not able to compete. So this is my revenge on this race as the first time around I was injured. This will be my 2nd Ironman® racing EN style and I have complete confidence in that I can execute my race plan. My goals for this race are to just execute my plan as best as I can and to not dwell on obstacles that might be thrown at me through the course of the day, just stay focused and race in my box! My one thing is “I can do all things through he who strengthens me”! 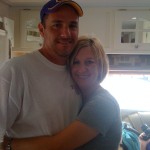 I’m  Matt Seaton and I joined EN this past December.  I live in Pineville, Louisiana with my wife Cindy and we have three boys (23,18,17).  This will be my third IM and my second time at IM LOU.  After being injured all of 09, I’m really looking forward to IM LOU.  My wife Cindy will be at this race with me and you might hear on the course with her bullhorn supporting the team. Look forward to meeting everyone.

Frank Haun — Both guys will be doing the race in KY.  This being my 6th and my nephew’s first Ironman. We’ll be support by the two lovely ladies in the picture – my wife and mother-in-law along with other family members. Wishing everyone the best Luck and Looking forward to meeting everyone in KY. 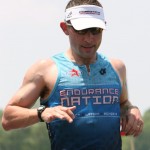 I’ve been with Endurance Nation since the beginning, joining the team after Coach Patrick helped me to my first Ironman® finish in 2007. I think I heard Coach Rich deliver one of the first Four Keys talks (though it wasn’t called that at the time) at the epic camp in Lake Placid the month before the 2007 race. “There’s no such thing as a good bike followed by a bad run” reverberated in my head on race day!

Louisville will be my second Ironman. I’m feeling more pressure to perform this time around, but am still fired up about the opportunity. Like many others in haus, the last few years have presented a number of personal hurdles to cross. I’m extremely grateful to be able to toe the line healthy and strong. That will be my race mantra. 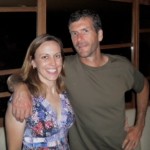 Aimee Hendrigan – I live in Boston with my husband Bob, directly across the street from Fenway Park! I was raised in Cambridge, Mass and grew up a swimmer. In college I played varsity water polo (little-known fact: my team nickname was “Killer” – trust me, it was ironic!). After college I spent many fun-filled years in California, where I first dabbled in triathlons. I lived in Santa Barbara, and then in the Bay Area, where I got my masters in city planning at Cal. I’ve been back in Boston for six years and currently work at a foundation, making grants aimed at ending homelessness and creating healthy communities. This is my first Ironman; I’ve done two half IMs in the past year and many sprints and Olympics prior to that. Looking forward to a HOT day! 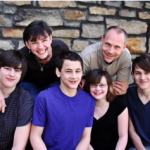 In high school, I did one year of swimming, one year of cross country, and some soccer.  I was interested in triathlon in the mid 80s and even subscribed to Triathlete mag and bought a Trek tri bike of the era in 1986.  Life (graduate degree, four kids, career) managed to get the priority but I lost weight and did a marathon in 2000 then switched to triathlon in ’03.  In October, I celebrate a decade of fitness and am truly blessed to have family and friends support me on this journey.
I live in Fairfield, Ohio near Cincinnati.  I am a finance manager at Procter & Gamble in corporate new business development getting P&G into new business models, primarily services.  I am married; my beautiful wife, Deb, comes out to races a couple times a year and usually takes home hardware in the duathlon! I have four beautiful children ages 20, 18, 16, and 12.  I am thankful to God for the opportunity to do the sport of triathlon and I look forward to meeting my teammates on Thursday, August 26th. 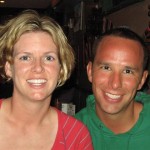 Dan Gilliatt 31, Winterset Iowa.  This is Ironman® #5, I’ve done Florida x3, IMOO 1x.  I’m not exactly sure why in the heck I chose IMLV.  I’m married to Brittany and live on an acreage in rural Iowa with our two dogs.  In real life I’m a firefighter/paramedic for the Des Moines Fire Dept.  My goal is to nail my execution and put myself in a good spot (relatively) to start racing at mile 18. 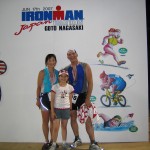 Yasko Howell — I started my tri career in 2001,  trained with a friend to do Danskin triathlon in Seattle (women’s sprint race series nationwide), have done bunch of Sprints, Olympics, HIM since then, and finally did my first IM AZ in ’06 (13hr51min), and then IM Japan in ’07 (12hr50min).  It’s been 3 years since IM Japan, and I am very excited to do this race (hopefully in EN way), especially after I had to withdraw from IM China in March due to an injury.  For me (and my husband), IM training/races is a way of life, and we enjoy the journey together.  I feel blessed to be healthy and strong to be able to train and race, and enjoy all the people we meet along the way.  I hope we are showing many good/positive aspects of what triathlon brings to our life to our 12 yr old daughter. (She is a competitive swimmer, and does triathlon occasionally)  Our goal is to do at least 1 IM race in each continent, and we have conquered North America, Asia, and hopefully Europe next year (signed up for Regensburg in ’11).  Maybe I could qualify for Kona when I am in the 60s! 🙂  I can’t wait to see Coach Patrick and all the IMLou peeps I got to know via the group forum!

Michael Johnson – 7th IM of career. Did Louisville last yr. with the WRONG gearing….still set a PB!! (12:37) Definitely looking for another PB..Hoping for sub12hr if all goes well. I will be entered in the Executive Challenge this year (will be wearing their white kit) on raceday. If I see any EN kit it will say hi. 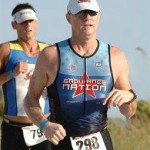 Rick Jansik, 48 years old, born and raised in Miami, Florida and currently living in Tampa. I have three children, twin sons who are 24 and a 14 year old daughter.

Two years ago I retired from 24 years in the Army, I am now working at US Special Operations Command as a civilian Intelligence Analyst.

I started participating in running events back in 2001 finishing my first marathon in 4 hours 20 min.  Since then I have finished 12 marathons (pr 3:45), 14 half marathons as well as many distances in between.

I competed in my first triathlon in 2007, since then I have finished at least 10 per year. I have steadily improved my age group finishes, July 30th I was second in AG at the Ft Desoto Top Gun Triathlon.

My first Louisville goal is to finish, second I would like to finish close to 11 hours.

Between running, triathlons and duathlons I will compete in at least 25 events this year.  With the help of my Endurance Nation training plan I am at my peak in physical fitness which I plan to take advantage of as long as I can.

I will be bringing my best friend and personal motivator Laura to the race; I look forward to meeting all my fellow EN competitors.