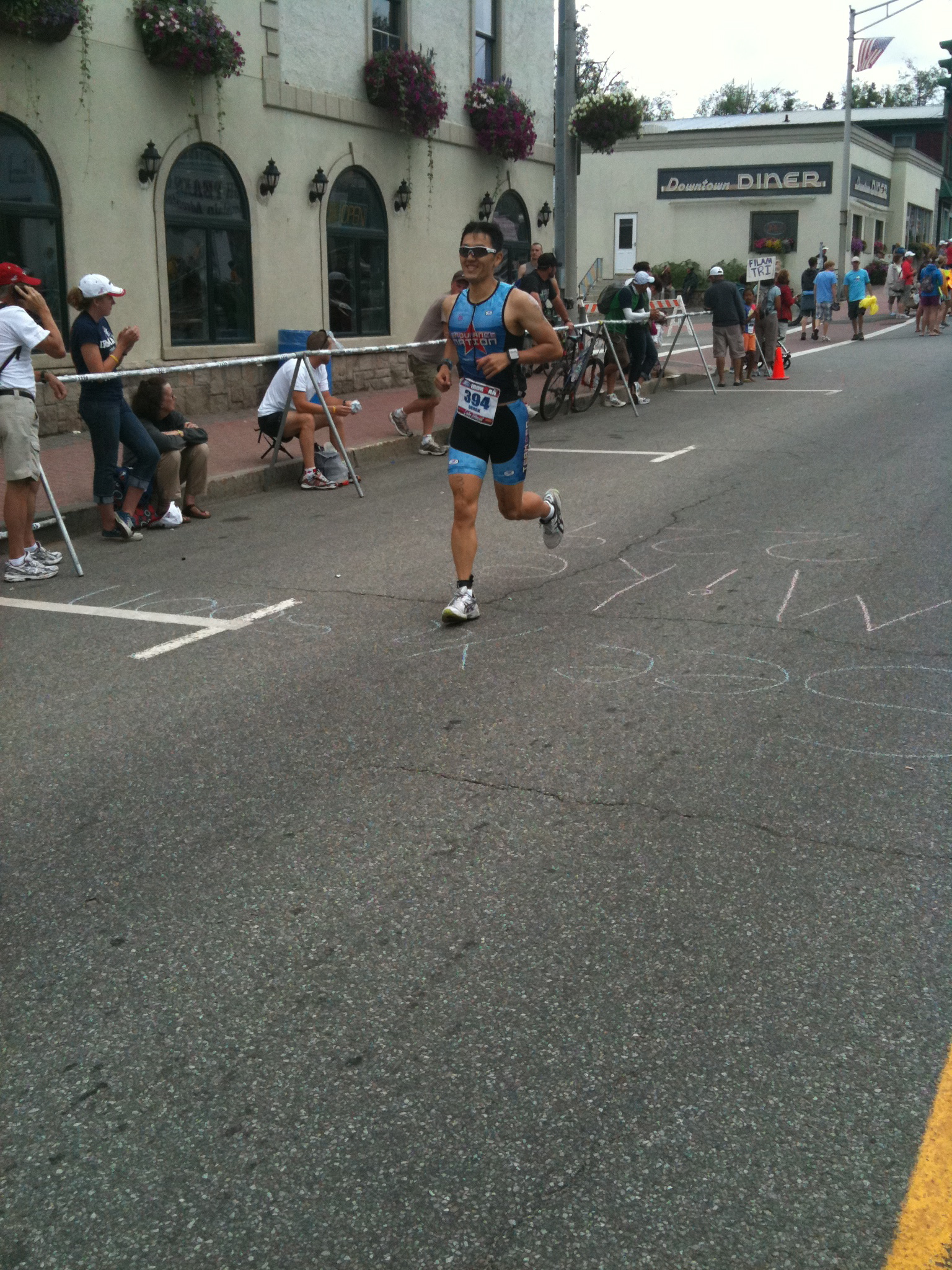 Derek Sumida smiled all day long during his first IM, finishing in 11:19!

The following is a quick recap from IMUSA by Coach Patrick. A full report will come later this week, as well as podcast interviews and more photos. For now you can see our pictures online via SmugMug and learn more about the weekend by cruising our Facebook page. If you like the vibe and want to be a part of Team EN, please sign up for our Waitlist — next opening in mid-August!

The 2010 edition of Lake Placid went off pretty much without a hitch. Weather reports all week suggested that it would be wet and pretty ugly. But the day actually turned out to be a pretty good day for racing. Still cool in the mornings with a couple quick showers, but the race kicked off under overcast skies with all reports pointing to a rough and pretty fast swim. People said it was brutal in the water. While the additional 800 people didn’t appear to show up so much in the photographs, they were definitely felt by the athletes in the water.

Out on the bike, it definitely was a tale of two races, Lake Placid being cool with some wind and moisture, while down lower in Keene, Wilmington and Jay it was warm to hot. And, I think that combination of cool and hot really wreaked havoc with a lot of folks. Not to mention the variable pacing issues that many middle of the pack cyclists faced as the course was quite full of athletes. All in all, the strong bikers still went fast…including a 5:07 from the eventual female winner. I was able to ride the course backwards and see many of the EN folks, some twice. Very cool.

Entering the run, it was still somewhat overcast. When the sun did come through it was hot, but for the most part it was cool. The wind did pick up continuously throughout the day, and as a result, some of the runners did face some pretty significant headwinds. Again, the temperatures did fluctuate and if you were unlucky enough to mess up your bike nutrition, you definitely suffered on the run. But, overall, for the team, it was a great race. I alternated hanging out with the Team at the EN tent and spending time at Mile 18 before I rolled into the finish line to start catching athletes.

We had people all across the board setting anything from an hour and a half personal bests to not setting a personal best but still having a great race. One of the great things about Ironman® is that each day is unique and while you don’t always get what you wanted, sometimes you get something that’s even more rewarding. I think it’s safe to say our athletes experienced that across the board.

Here are a few post-race video interviews from our YouTube Channel: