Jim is a professional speaker and consultant who works with sales teams to increase sales using mental toughness psychological performance training.  That truly is a mouth full but it is actually a perfect fit for training and racing in the triathlon world.  It is the connection between the physical fortitude required and the psychological component of endurance sports helps him consistently perform in every triathlon event he enters.

Competitive by nature, he entered his first triathlon in 2010 with a sprint triathlon in Madison, Georgia and placed 3rd in his age group and later that year his 2nd sprint triathlon landed him on the podium with a 1st place finish.  Jim said “I was immediately hooked on the sport but soon found out that the beginner races were no measure for the competition that lie ahead.”

He never thought of himself as an endurance athlete and quickly learned to love everything the sport represents. Jim completed his 1st Ironman® in 2012 (IMFL) and  2nd in 2014 (IMCHOO) with a few 70.3’s, marathons, half marathons and 10K’s sprinkled throughout the years. 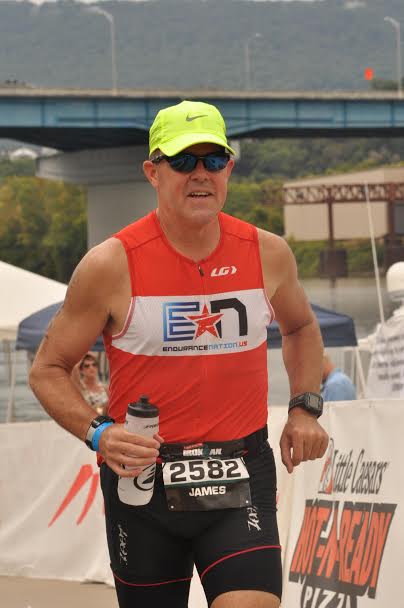 Jim joined Endurance Nation during the 2014 membership drive after an exhaustive search for a triathlon community that not only had a track record of success, tried and true customized training plans and a world wide footprint but reduced the “noise” that is so prevalent in most online forums.  He got tired of the “more is better” message that seemed to be most Age Grouper montra.  The EN coaches know how to prepare you for your Ironman event.

Building the Atlanta Community – Jim believes there is an awareness of EN within the triahtlon community in Atlanta and knows that as visibility is gained through local affiliations with the bike and running shops as well as training rides and runs, he will show everyone that there is a better way to reach for the long races, “The EN way is the best way to, not only to compete in the long races, but stay in the game for the long haul.”

Married to my best friend and biggest supporter, Cathy, for 25 years.

Grew up in the Washington, DC suburbs of Maryland

BS in Business Administration from University of Delaware

Average 20+ MPH on the bike in an Ironman race