It’s hard to beat racing an Ironman® in November, but to be able to race in Florida while the rest of the U.S. is readying itself for winter is a big time perk. I mean, partly sunny and temps in the upper 70s? Come on! Plus, you get to swim in the Gulf of Mexico! Team EN is ready to own this one as athletes from around the world stream in to Panama City Beach. Here are the members of Team EN taking on this beautiful and challenging course. 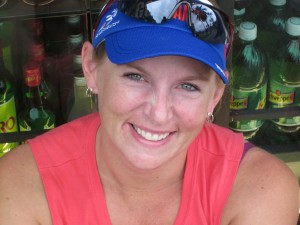 I am a RN, in a love affair with triathlon. I’m in no way fast or in it for the prizes. I just love the sport. I started in 2002 with a sprint. I then allowed myself 1 or 2 each year due to cost. In 2010 I stepped it up and did 70.3® California. That was so challenging I vowed I’d never do anything that hard again. Well, like childbirth, after some time you forget how hard it was. I signed up for IM CDA in 2012. I missed the last bike cut off and my world was crumbled with a DNF. Because my bike is my weakest element, I decided to do Florida to get that finish. I’m determined!! I crashed my bike a week ago and broke my hand. So what is already a challenging day will be more so for me!! One mile at a time…I will finish!!! 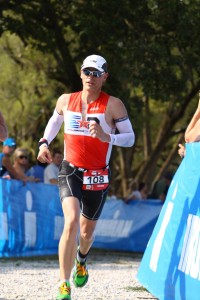 I live in beautiful central Michigan with my wife, Michelle, and our youngest of four, Andrew. I started my running life in 2004 when I set a goal with my oldest son to run a marathon. In 2006 an injury let me to take up swimming. About a year later, and with great anxiety, I bought a bike and started into triathlons and the dark world of second jobs and secret bank accounts. About 3 years ago I was really in deep, so I decided to start doing Ironman® races. I signed up for Beach2Battleship (my first IM), Texas and Florida. I stumbled through these races and even saw an opportunity for a potential podium finish, but I would blow it all with poor execution, poor nutrition and the mistakes we all make until we figure things out.

After a mediocre showing at Florida in 2011, I met an EN alum on my flight home who suggested I check out the EN way. I’ve been a member of EN for about 2 years now and have figured a lot out with the help my fellow EN peeps and coaches. I’ve been training the EN way and am looking forward to my first full Ironman® with a power meter.

Time is not the most important metric for me in Florida, but execution and fitness usually boil down to a time, so the crystal ball shows a sub 11 race, a 1 hour PR over my previous racing carnage. At a more micro level, I want to execute well and stay on my nutritional plan (read avoid serious nausea and dizziness). The key for me is not over cooking the bike or the run and keeping up with nutrition. Oh, and I want to draft Tim on the bike. 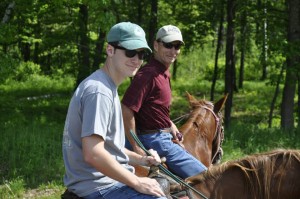 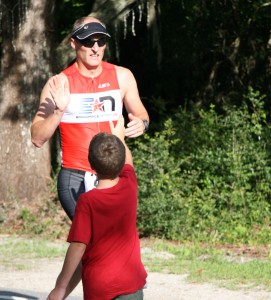 I’m from Williston, SC. I’m married to my wife Pam and we have 2 wonderul childern, Tucker (7) and Allie (3). I started doing triathlons 3 years ago after some encouragement from a friend. Sprint distances races only to this point but decided to pull the trigger on an ironman after talking with some friends that had also done one previously. I picked Florida due to the location and the course. I knew shortly after I registered, I could not do an ironman without proper guidance and training. I began looking and found Endurance Nation via a google search. I joined in Jan 2013 when it was open for new members and began my first OS on Jan 7th. I have learn much from the EN coaches and team members alike.

I looking forward to executing the race based on all the training and knowledge that Team EN has given me in the past 10 months. My goal for Florida is to have fun, execute smart, don’t get hurt and finish in 13:30 or less. Can’t wait to meet my EN teammates that have been on the same journey I have over the last few months. GO TEAM EN! 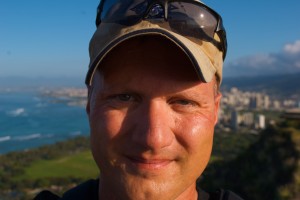 I am on active duty in the Air Force. Started this triathlon journey in December of 2012. In that time I have competed in a sprint and two 70.3® races. 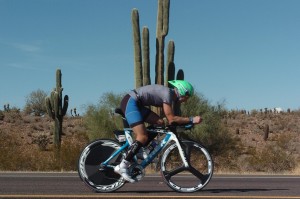 Ironman® #5 for me and second time at Ironman® Florida. This is my fourth season with EN. Florida was my first Ironman® back in 2010 so I’m happy to go back. This will be my second Ironman® in 10 weeks and training has been a little hit and miss for this one due to a hectic work schedule the last few weeks. I’m going to go out there and do my thing and hopefully meet a couple of goals along the way.

I am a rural doctor from Coleman, Texas. I started in Triathlon 4 years ago after being diagnosed with Type 2 Diabetes. My shirt says ” I Tri To Not Be A Diabetic” . It has worked. This lifestyle has saved me and has made me much more effective when treating Diabetes.Looking forward to the IMFL. BTW, “I’m the Dude. So that’s what you call me. You know, that or, uh, His Dudeness, or uh, Duder, or El Duderino if you’re not into the whole brevity thing.”

I live in Saint George Utah, I have competed in distance athletic events for 11 years. Completing my first half IM in 2003. I don’t know what to expect on race day, I have never raced a flat course, and have no flat areas to practice. I hope to finish in under 12 hours, but will be happy with just finishing. 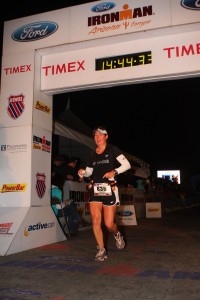 Since these are my last 2 IMs — changing focus to ultra runs — my plan is to enjoy every moment.

I was hooked on triathlon after my first sprint five years ago. It has truly become a lifestyle sport for me. I feel fitter now in my early 40s than in my 20s. My goal is to finish Florida in around 14 hours. It is my first Ironman® and hopefully not the last.

I am from Chattanooga, TN and started doing Sprints in 2009. I only competed in Sprints until last year. In high school I played football, wrestled, and ran track and played a little rugby in college. I saw my stepdad run a couple of tri’s in the 80s which got me dreaming of IM. I set a goal to do a Tri before I turned 20 and did it without knowing how to swim with my head in the water. However, I spent the next 13 years getting out of shape.

Even though I had always dreamed of doing IM I never thought I could actually do it. At the end of last season, I saw a flier for a Half not far from Chatt. I decided if I could still get in I would do it. I had only been training for short course so it was a challenge. The weather was terrible, but I finished in just over 6 hours. At that point I started looking into the full and found out about IMFL. My friend and I drove down fearing we would not get in online.

I do not feel ready but am looking forward to it all the same. Initially, I thought my goal would be 12 hours since I did my half in 6. Wow, was I wrong! Now I want to finish without injuring myself too terribly. I would like to finish the swim in under 1:30 (1:15 ideally). I could break 6 hours on the bike, but my goal is 6:30. For the run, I would like to do 4:30 but could end up walking the whole thing. 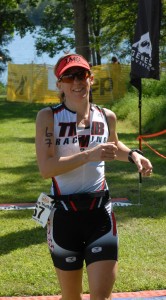 I am from beautiful Hunterdon County, NJ and I have been involved with triathlon for 4 years. This will be my 3rd IM distance race, first one with EN. I am super lucky to have an extremely supportive group of family and friends – my husband and four daughters most especially! My race day goals are to do the best I can and enjoy the experience.

I’m from Orlando and have been doing tri’s (non-competitively) since my teens. I have completed two 1/2 IMs (Florida & Augusta), countless marathons and ultra-races including Gobi March. This is my first full IM and so grateful to TeamEN for all of the support. I look forward to meeting each of my teammates at IMFL. 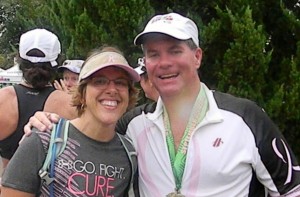 I am a 47 year old government employee from Macon, GA. This will be my first ironman distance race. I have been married to my wife, Jane, for sixteen years. We have one thirteen year old daughter.

I got into triathlons four years ago after loosing over seventy pounds. I bought a bike with the intention of doing one race and then either selling it or to use it to ride with my wife and daughter.

Instead, I fell in love with the sport and the people that I both train with and other athletes that I have met. In the first two years, I completed five sprints and the Augusta 1/2. The third year was a year of disappointment as my wife battled and defeated breast cancer and I lost my job as my it was out sourced. As a result, both my fitness and my weight suffered.

Signing up for Florida was the way for me to reclaim my life. I found a new job and was able to lose a lot of the weight that I gained during my wife’s illness. I am not yet back the weight that I was when I did Augusta but my overall fitness exceeds what it was then. This is my fifth race this year having completed four sprint distance races.

My goals is to finish in under 17 hours (lame right?). Here is what I expect:
16-17 hours — wheels came off but I will finish before midnight
15-16 hours — realistic expectation
14-15 hours — awesome day
sub 14 — God has smiled on me and showered me with his blessings. 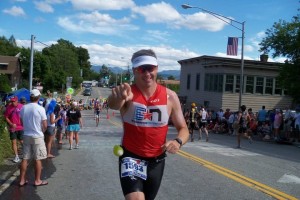 Married with 3 children ages 10, 7, 5. From Havertown, PA (near Philly). Been doing tris for about 7 years. My first Ironman® was Lake Placid in 2011 as a member of Team EN. Had a great experience at Lake Placid with EN, beating my goal of 12 hours, so I am back for more this year! Looking forward to doing Florida with my best buddy from high school and fellow ENer, Mike Burke. As a Clydesdale, I am happy that the flatlands of Florida will not punish my love of chicken parm grinders and beers, so I am looking for a PR!