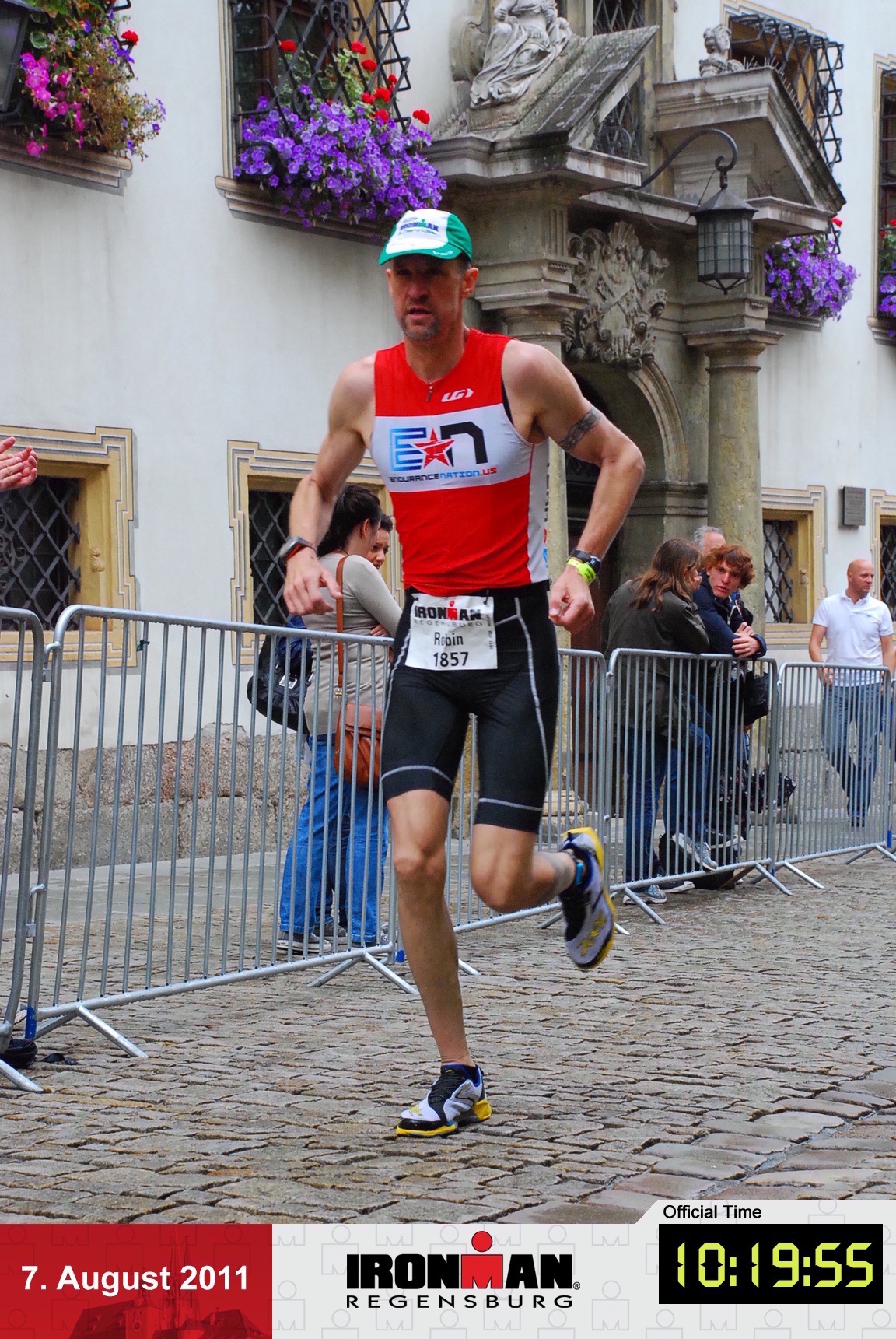 So had a good 2012 considering too many Irons. 7 minutes from rolldown at Tremblant. The main goal moving into the future is to make the Show. Gets harder and harder as time moves on, as we know, with fewer slots and stronger competition. The potential may be there for me. Trying to learn and develop as time goes on.

Texas would be my eight start and eight finish, if successful. Mom/sister/niece there to support. Great volunteers for the race. Swim course interesting. Good bike and run courses. Some aspects, I think, fairly poorly done (expo/swim start/transition fairly far apart from each other, parts of bike course – very poor separation from car traffic and some police doing a poor job at intersections (scary), poor area at the finish to sit/get legs up/drink/eat/be in shade – could have saved a lot on IVs if Ironman® had provided a recovery area of adequate size with adequate food and drink.)

Generally good 10 weeks of training leading up. Took down days as needed for illnesses, bike weeks recovery, etc. One week before, 48 hour stomach flu syndrome. Vomiting, etc. Thought I was fully recovered for the race but now not so sure, as below. Got to race early. No problems with pre-race stuff. Best sleep so far the night before. Nerves pretty good the morning of.

Fine mostly. Too cold because lower end of the no-wetsuit range. Typical scrum crap the beginning. Water slapped into mouth. Short panic. Wasted time swimming wide to get out of the mess. But, unique to this race, I accelerated the last two thirds passing folks. In the three years, wetsuit swims for 59-65 minutes for me. This swim was no wetsuit. So maximum goal of 70 minutes. I did that.

Raced a fast 40 miles per plan with perceived effort being low but a weirdly high heart around 150. In retrospect I probably should have paid attention to that more. Came to 56 miles still at about goal watts and speed. Things went south from there. I don’t have my bike computer back yet, but power gradually declined to being able to barely hold 180 watts. I have a well refined and successful nutrition and hydration plan that has worked well the last three races. 40 oz of perform every hour along with 200 cals of bars or gels.

In all previous races I pee like every 15 minutes. A lot. So I thought going for the two pees on the bike would be ok. I barely peed once on the bike this race. Had good pre-race hydration. The one pee on the run looked like Coke. So I am guessing that dehydration was the big problem of the day for me. Maybe my gut was not fully recovered from the week before. And I did not drink enough. In the last half of the bike, I tried to get in more Perform than planned. Hard to do. And some water. For future very hot races, I am guessing I need to up the Perform and decrease the bars/gels because of the extra calories from the Perform. And be more liberal with the free water.

So anyhow, felt quite bad the last quarter of the bike and nursed it in. Back and butt were fine. But just generally very uncomfortable with general weakness.

T2: 4:44 Literally burned feet on walkway were bags were. Really inexcusable from the race folks. Matts needed !!!! Had a very slick transition planned. Put on shoes. Grab ziplock back and go. That is it. But physically feeling much worse than previous races. Just dark. And pretty darn sure was not mental problem. Sat down. Did everything in the tent that I was intending to do on the run (putting stuff on). Grabbed waters in the tent. And moved on.

Two runs of 3:29 last year. Plan of maybe better than that. Actual 4:04. Knew that I was probably done starting the run. Felt close to physical breakdown, passing out, etc. But keep moving. For the first eight miles spent a lot of time at aid stations. For once ate and drank real food. Fruit. Pretzels. Water. At about 2 miles I came up with the plan to drop out at six miles where I would see my family first. Frankly the motivation to keep running at that point was to not worry the family waiting for me. Kona possibility gone. Other motivation? So, I did not see them at six miles (mom/sister/niece). Saw mom by herself a little bit after that. Asked her to join up with the others I needed to talk to them.

By the time I got to all three of them around eight miles, I was feeling better. I stopped and talked to them intending to say that was it. “Sorry to not finish but time to stop and save my legs for another day.” But as I am tearfully talking to them, somehow the feeling and the words to continue came out. Motivation? I felt better. I love to run. Had a fun run course ahead. Let’s do it just for the fun of it! Kissed all three. Off I went after quitting. So the next 8-9 miles I zipped along. My first eight miles were like a 10 minute some pace. The middle 8-9 miles were maybe 7:45 pace. Factored in heart rate to get the most out of me. And slowed down some in the last 6-8 miles but appropriate for the previous stuff and the heat index. Chatted to a bunch of the team on the run which was nice.

Ironman, like life, perhaps, gives you what you need, not what you expect. Disappointing to miss the goal yet again. A bit of despair over lost opportunities of this race and past races. And worries of finally making it all happen in one race in the future. How long to continue in this selfish endeavor? Etc.

Hopefully lessons learned about adjusting nutrition (fluid) for severe heat (and will probably do official nutrition consult). If I am not peeing a lot on the bike and run (more than most), something is not right. And don’t get sick a week before a race And getting a more refined sense of what my heart rate means for the bike (back off and hydrate) and the run.