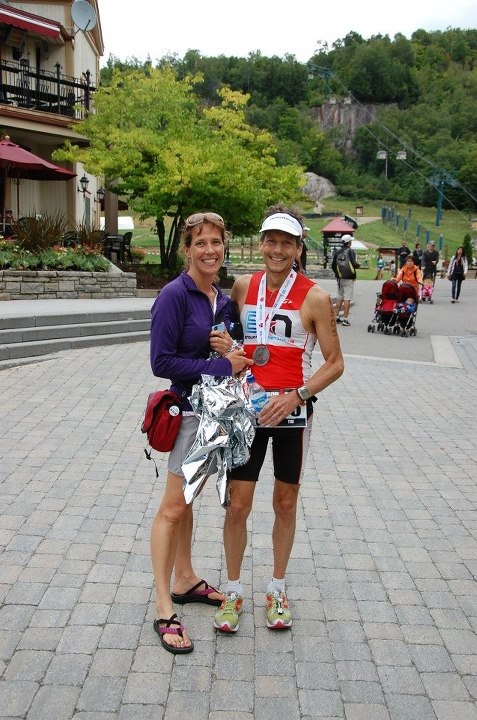 Background-  2nd full year EN training , 4th IM , 50yrs old in new AG , FTP 230 (not recently confirmed but trained percentages of that number feel its correct), Vdot 50.5 (confirmed early in the year via 5K and 13.1 races but nothing recent, trained at those paces so feel its correct) raced a weight of 122lbs, 4.1 w/kg ratio.

So I’m in my room at 3:45 eating breakfast and I look over at one of the bags with misc gear in it.  Its a Lululemon bag and covered in quotes.  The one quote I read aloud was “Once a day do something that scares you.”  I feel a little nervous before a race but not much scares me or gets me rattled.

Was a 1 loop clockwise rectangle about 1-1.2 miles out, .2-.4 miles to the right , then 1-1.2 miles back. If you lined up on the buoy line it appeared that the buoys angled slightly left to right , so besides knowing that is where all the fastest folks go to get beat up it looked longer. If you lined up on the left, it gave the appearance that some of the moored boats where in the way.  I chose the middle up front. The start- swam hard and fast right away as I had planned and trained to do, was ok for minute , then the shit hit the fan. I can honestly say this was the first time I have ever actually been scared during a swim. I would have given up 5 minutes of my time to get the hell out of there but there was no where to go, but I wanted out of there now. I can see how people are dying in the swim. I went from racing , to trying to survive, after about 3 buoys, this turned into trying to recover , and then finally back to racing which was more about pacing and worrying I already burned too many matches in that battle.  On the last leg I felt a tinge of cramp in left hamstring, went away quickly, then immediately left calf cramp, then right, then one more time to the left and one more to the right.  I have suffered from these calf cramps before only in swims but none this year. Grrrr.  All I can do is swim no kick and they slowly recover. It doesnt affect the remainder of the race but boy to I feel them during the recovery days only if they cramped up. Alot of EN folks commented it was the worst swim battle they had ever been in.

Long run same as 70.3® , dropped cap and goggles during the run but let them go, guy behind me picked them up and gave them to me ,  thanked him very much.  Transition was a bit slow due to cold temperatures yet again for this freeze baby. Put on vest and arm warmers, helmet , shoes(with custom made toe covers cut out socks and duct tape since I left mine at home).

I knew this course from the half and had ridden the Lac Superior section and the rte 117 section while tapering.  Was initially targeting .74-.75 which is 170-172. Slowly backed off this a little bit.  Rode and chatted a bit with Robin Sarner.  Trevor went by too fast to talk. Also rode and chatted with Paul Devasish aka Dev.  Dev is such a nice guy and offered up a bit of friendly advice to save myself .Lots of EN peeps out there.  End of first loop I was hoping for a ranking number from my girlfriend and sister who were spectating.  I got a sign that said NO RANKING!  I saw them at the last minute and about a hundred yards past them I pulled my vest and arm warmers out of my back pocket and threw it on the side of the rode hoping they would see me do it. Nope. They stayed there for the remainder of the bike, but were gone at the end of the race.  Consumed 4 bottles of perform , 12 margarita shot blocks, 2 waffles one chocolate and one maple. Drinking every 15 min and eating every 30 min. This worked out to 1370 calories or 249 per hour. Total caffeine was 90 mg and total sodium around 2300mg. The gut did not feel good the first hour or so, probably from all the lake water I swallowed in the swim battle. This eventually went away and I felt good 2nd hour on.  4 pee’s, and only a slight fade on the second lap I got off the bike feeling pretty good.

I was trying to dismount my bike at the entry to transition under the arch (as usual) and they were yelling no keep going. You had to ride your bike on the red carpet into the transition area another 50yds maybe.  This caused me to forget to turn off my computer. They took my bike, I was trying to move off the carpet and out of the way so I could take my shoes off and run bar foot and they kept say no follow the carpet. I finally got past them and took shoes off. They grabbed my shoes and took care of them. So I ran straight for the T2 tent over the pavement, they caught me and said you have to go over a timing chip in the red carpet, so I had to back track and run over the timing chip. This was well past the official dismount, which was well past the bike in arch and entry to transition. (maybe they covered all this in those mandatory meetings).  Socks , shoes, visor, flask, and garmin.  Gone.

Hilly and slow at first….Not very good at going slow initially but those hills helped.  first 2 miles at Easy Pace (EP) +30 first time ever LOL.  Next 9 miles EP to EP+10.  Back to the hills on second loop logging another couple slow miles and then only managed EP for a few miles after that fading to EP +30 for the remainder.  Experienced a very short but severe cramp that worried me very early on but it only lasted maybe 30 seconds and never came back.  Did the run/walk strategy walking 30 steps every mile for the first time and thought it worked out very well considering the PR. 3 porto potty pee stops and I substituted those as my 30 steps for that mile. I was religious on those until mile 24 and then just brought it home.  500 calorie flask was half EFS vanilla half power bar vanilla , loaded with extra sodium(roughly 1300mg in flask) and caffeine(150mg) in the form of 4 saltstick with caffeine, and one prerace.  I sipped this every 3 miles and finished it at mile 21. Perform every aid station they had it (it was not available every aid station some only had water).  Coke the last 5 miles with 2 more regular saltsicks. Hard to figure calories but figure it to be easily 250+ per hour.

Was great to meet alot more EN peeps and to see others again. Special thanks to Brenda and Steve for being team Captains.

Absolutely great race , would recommend , would do it again.  In fact I’m gonna sign up tomorrow with my girlfriend Heather.

Go here to download our OutSeason® Guide, a FREE .pdf to teach you more about our “FAST then FAR” training approach!