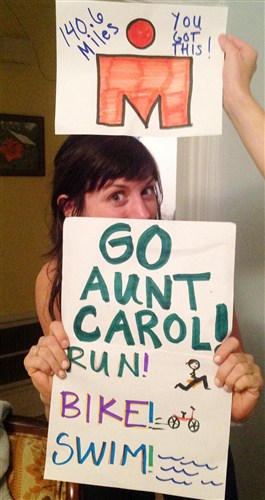 I’m still not sure how I got here! A lot of work and a whole lot of luck for sure.  It’s been over a week since Ironman® Kona and I am  pinching myself to see if I’m awake and all of this really happened.

We arrived a week pre-race which was just the right amount of time for me to soak it all in, and get a bit acclimated to the Kona weather.  I’d been doing the sauna and heavy clothes routine for weeks so it wasn’t so bad.  The first thing we did was swim in Kailua Bay.  Okay, I thought I’d died and gone to heaven.  It was so beautiful and peaceful and I think I only missed one day the entire week without swimming.  Got a couple of great training rides in with Al, Teri, Steph, Neils, Barb, and  my hubby, Turby.  Awesome to have ENers around to show you the ropes!  I did my runs on Ali’i Drive from our condo and got used to that part of the run course.  Did I say how humbling it is to see the athletes on Ali’i Drive either running or biking?  Holy Moly – can you say ABS??   Monday night was the >60s athlete dinner which was so inspiring.  Meeting some of the “older” Kona participants who are legends was unbelievable.  Lew Hollander, Harriett Anderson, Sister Madonna to name a few.   Thursday morning was the >40s women’s breakfast hosted by Julie Moss and Kathleen McCartney.  They were so gracious and funny and motivating!  We watched the video from the 1982 Ironman® with Julie crawling across the finish line after Kathleen had passed her.  What a great experience meeting them!  Thursday night, my friend Tina surprised me as we were going into a restaurant!  She flew in from Utah to cheer me on and help Turby with the email updates and pictures during the race.  Now, that is a good friend!  Friday morning was breakfast with ENJ  That was a great time seeing everyone and eating lots of pancakes.  Penny Wilson was there and was so kind to stay afterwards and help me figure out my nutrition strategy (better late than never!)

I’d like to mention that two weeks after IMNY, my niece Chenin was shot in NYC during the Empire State Bldg shooting.  Chenin is one of my biggest supporters and cheerleaders, and was on her way to the train station to come visit us for a family reunion weekend.  She is very athletic, runs half-marathons, swims and bikes like the wind.  We have been planning on doing a triathlon together as soon as she is done with grad (PT) school.  Now she is in rehab; not allowed to put any weight on her leg for 3 months, and may not be able to run again.  I tell you this because when all of this happened, I told her that I would be doing the Kona Ironman® for her and she would be “with me” every stroke, pedal, and step of the way.  I had a picture of her (on her bike and another from her last half-marathon) in my bento box on the bike; and had written “For Chenin” on the back of my race number.  I had sent her a picture of that before the race, so she knew she was in for a long day/night with me out thereJ  She stayed up ALL night watching the race online (6 hours time difference) and was sending me awesome energy throughout the race!

Being a pretty slow swimmer, I started all the way in the back and to the right.  That seemed to work out well because I only encountered a little bit of jostling and bumping on the way out and nothing coming back until almost the swim exit.  The water wasn’t as clear as it had been all week, but I was able to find feet and bodies the entire time and really enjoyed being able to draft from time to time!  That was a first for me. I was very happy with my swim time.  It just seemed like the turnaround boats were SO FAR AWAY!

I took my time changing into bike shorts and putting on all of the lube.  Took a pee and covered myself with suntan lotion. I even told the volunteer I wasn’t in a big hurry!

Exactly what I had planned (hoped) for.  As in IMNY, I never wanted to feel like I was working.  I kept my watts in check and really tried to enjoy myself.  It was great until the end of the Queen K going towards Hawi.  The crosswinds there were unbelievable.  I’d go from the shoulder of the road to the middle of the road in a split second.  I was leaning into the wind and just praying that I didn’t get blown off my bike.  And I didn’t even have race wheels!  (one of the very few I understand).  Once past that “event”, things were better heading up the hills to Hawi until it started to pour rain, along with the wind.  Actually, it cooled me off quite a bit, however I was hoping the rain would be gone by the time I got to the turnaround and started the descent.  Hooray – it did stop!   The descent from Hawi was awesome and the best part of the ride!  Turning back onto the Queen K for the return was just as I expected… Major headwind!  Oh well, just stayed aero and kept on going.  It’s weird going down a hill and pedaling and seeing maybe 12 mph!  I stopped at all of the aid stations because I am not comfortable grabbing bottles on the fly, so I got to chat with many volunteers as I poured water over me and poured Perform into my Speedfil bottle.  It was a LONG time out there, but I was mentally prepared and just so happy to not get a flat or get blown off the bike!  Chenin and I had long conversations while I was out there (out loud, no less!) and I knew she was right there with me.  Oh – almost forgot!  I peed once on the way out at a port-a-potty, but on the way back, they were all on the other side of the road so I FINALLY figured out how to pee on the bike!!!  Very proud of thatJ

Another shorts change and more lube on the feet and another pee.  It felt so good to get those running shoes on after being clipped in the bike for so long.

The first part of the run was unbelievable.  I didn’t think it was as hot as I expected and had my arm coolers on which worked great just pouring water on them and getting ice at every aid station.  My stomach was pretty good (Thanks Penny) and no hip-flexor issues.  I did try a sip of coke at around Mile 2 and that immediately sent me into stomach cramps so I stuck to water for about 6 miles and then used gels (flask) and water after that.  That seemed to work fine.  Running on Ali’i Drive was great with all of the people and seeing some ENers going by!  The sun was setting as I was coming back in and it was just beautiful.  I couldn’t believe even then that I was a part of such an awesome event and actually running in Kona on Ali’i Drive during the Ironman® World Championships!  I saw Turby and Tina at Pilani Hill and we walked up it together.  Then it was back to the Queen K.  All was well, although my pace slowed here a bit.  I guess I was very well hydrated because I stopped to pee 4 times on the run!  However, once it got dark, I was getting into a bad place mentally.  It seemed I had so far to go and I really didn’t like the pitch blackness of the Queen K and not seeing anyone until they were right on top of you! Thank goodness for glow-sticks!  It was not much better heading down to the Energy Lab but at least I knew I’d be at the turnaround soon. Chenin and I had many conversations during that time, and her very own dedication and strength is what got me through.  It was great to get back out of there to the Queen K and head for “home”.  It seems the closer I got, the better I felt.  Still walking the aid stations, but never once walked during the run except Pilani Hill and aid stations.  Around mile 23, I realized that if I picked it up just a little, I could break 15 hours!  The whole day had been about taking it easy and enjoying the journey.  But somehow I did manage to pick things up a bit and passed a whole lot of people walking back towards town.  I turned onto Pilani and Turby ran with me for the last mile (I told him not to get me disqualified!!)   When I got to Ali’i Drive for the last time, I was sprinting to the finish!   I don’t think I will EVER experience anything like the finish line at Ironman® Kona again in my life.  Thousands of people screaming, great music blasting, Mike Reilly going crazy calling me “Grammie”, and  me running to the finish on Ali’i Drive. I flipped up my bib number so Chenin would see that I was bringing her through the finish line with me!  Un-freakin-believable!!  What a day we had, Chenin!

I was totally thrilled with my times.  Actually had a better run in Kona than in IMNY!  After getting my bike and bags to the car, we stayed until the finish.  That was the BEST decision ever!  You can’t even think about being tired if you are at the Kona finish line.  The energy is unbelievable and seeing those last people come through (including Lew Hollander and Harriett Anderson with 20 sec. to spare) was mind-blowing!

I am still in disbelief.  I probably won’t do that again so I told Turby he has to qualify for Kona so we can go back there someday!  He is the best and I wouldn’t have been there without all of his help.  Thanks to RnP and all of the ENers for your great support.  Thanks to Stephanie for letting me wear her EN singlet!  Thanks to Al Truscott for the 2 great training rides and advice.  Thanks to Penny Wilson for her nutrition advice which really worked well! Thanks to Chenin for her unending support and love, and we WILL do that triathlon someday!

Sorry this was so long; but it sure was fun to relive it!