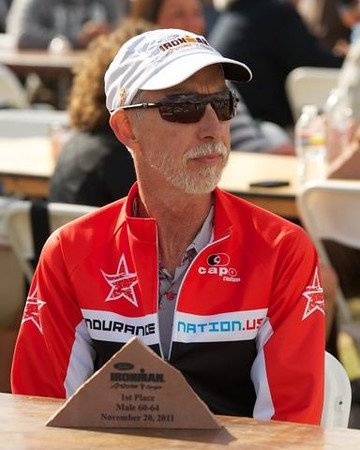 My longest race, I’ll try to make this my shortest report.

First, a note on how I race. I make goals for most races a long time in advance, and then think about that goal periodically over time. Come race day, I really don’t pay conscious attention to motivation; I allow the deeply ingrained goal to run the show. E.g., I can think of at least ten times in the past 7-8 years when I have announced long before race day, to myself and anyone I can get to listen (my wife, the cleaning lady, this forum, etc), “I’m going to win *that* race”, and the majority of the time, I pull it off. I think there is a limit to the number of times one can haul out an all out effort, so other races get different goals.

Here’s what I said in a Jan, 2012 journal entry on the coming year’s goals, about *this* race:

“October 1, I’m on the Big Island, the capstone of my year. My goal there is to have fun on race day. Fun means I feel strong, ride well, and don’t walk outside of the aid stations on the marathon. I’d like to see the sun set while I’m in the energy lab, then soak it all up the final 1/4 mile of Ali’i Drive under the lights, me beaming right back at them.”

I said nothing to myself about speed, time place, etc in the 9+ month long build up. Deep down, I felt that my being back at the IM World Championships  was a miracle, so I wanted to honor that above all else. My race here was *all* about getting BACK here and FINISHING. I was not racing, simply participating with grace and gratitude.The conditions make the “grace” part a little hard though.

So I didn’t start my watch when the cannon went off, and never looked at my time or speed. Things I remember from my race:

From 2004-2012, I’ve trained for 16 IMs, started 14 and finished 13. In those 8 years, I was more or less focused full time from a triathlon and sporting standpoint on getting to and finishing at Kona. On the way, I  won my AG 5 times @ IM CDA and AZ, qualified for Kona 7 times, getting to go 4 times, with one DNF and one DNS. I sense that this race is the closing of a major segment in my triathlon career.

One of the songs on my pre-race playlist since 2001 has been U2’s “I Still Haven’t Found What I’m Looking For.” I don’t know what it is that I’ve actually *found*, but I’m more at peace now than at any time during that whole adventure.

I also know that I am chomping at the bit to get going on the OS on October 29th, and have at least 3 races in mind for next year: St George, American Zofingen, and IM Tahoe. I haven’t yet decided which one is going to get the full on race to the hilt treatment, but I guarantee at least one will.