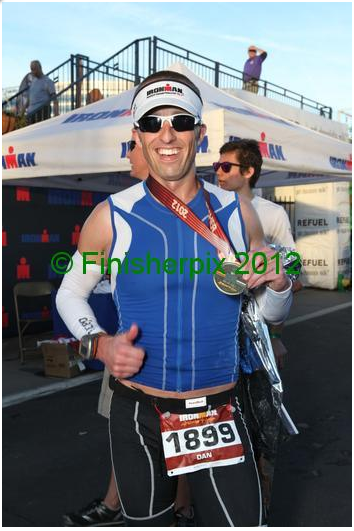 Arizonawould be my 2nd Ironman, after completing Wisconsin 2010 in 11:48.  In December of last year I decided to go all in.  I needed to do two thing, loose some weight, and get a training plan to follow.  I found a great nutrition plan on Training Peaks which limited myself to 1600 calories a day.  To my amazement the pounds started falling off.  At the same time I joined Endurance Nation.  The past couple years I had been running with VDot and riding with Power, and really started seeing improvement.  I was looking for EN to push me to the next level with their plans and give me some guidance implementing them.  I think I read every page of the EN WIKI, and every download available. Leading up to Arizona I had PR’d in every race I did this year, including Steelhead 70.3® where I was able to go 4:38.

I was scared to death of the swim.  Dark and a Cold 62 degrees.  I wore a full suit with neoprene cap and booties.  The cannon went off and I was getting clobbered.  I had only started about 5 deep, and About 100 yards in I turned over on my back and took a deep breath. This was not going my way.  The year flashed through my head. I had to convince myself that I was well prepared and to put my head down and swim.   It seemed that every few hundred yards on the way out, I would hit a huge group and get beat up for 20 seconds.  The way back was much better.  I felt pretty strong in my pull, and was now hoping to make up some of the time I lost on the way out.  I reached the stairs, had my wetsuit stripped, and started running to get my bike bag.  I didn’t wear my garmin in the water so I had no clue what my swim time was, but I felt pretty good about it.  I wouldn’t know what my time was until the race was over.

I am not sure what took so long for transition.  I think the arm coolers and cycling gloves might have taken too long to put on but they were comfort items for the long day.

The bike was 3 loops and I knew I had to do a 1:40 per loop to do 5 hours.  I know EN encourages JRA “just riding along” pace out of the gate, but I didn’t have time to lose.  On the way out we had a slight headwind going up hill. On the way back I was flying downhill all the way to town.  I hit the turnaround at 1:36, 4 minutes fast.  I figured that was money in the bank that I might need later.  My NP was 208 watts.

The second loop seemed to be a little harder, I started to think I might have over cooked the first loop.  But I kept my power numbers in check.  The wind seemed to be changing up, not sure what it was, but it was different.  I came into the turnaround at 1:39, still below my 1:40 goal with a NP of 203.  I saw my family cheering, this was a huge boost to start the third loop, it was like they game me superpowers.

Starting the third loop the wind had shifted to a tailwind on the way out.  It was a nice push up the Beeline.  My average speed stayed over 22 mph on the way out, that was a big bonus!  I headed back to town and decided to not worry too much about my power on the downhill.  I knew I would beat my goal and could give my legs a rest.  I came into T2 with a 1:38 on the last lap and an NP of 199 for a total bike NP of 203.  I was ecstatic!

Once again running into transition my family was there yelling for me.  I had goosebumps and felt like I was floating though.

This was where the day started.  I had been looking forward to this “Mary” for two months now.  I felt amazing coming off the bike, but I had to pee.  Yes, I tried to on the bike but couldn’t do it.  The porta potty was not close enough in the transition so I figured I would run until I found one.  The first mile is always fast, but I tried to slow down.  I was doing 7ish pace and hit a open porta potty on the course.  Oh that felt good.  I jump back out and still finish the first mile in 8:25.  Ok, now it was time to slow it down for the first 6 miles or so.  Mile 7 came I dropped the pace and I decided I had better take a Powerbar Gel. It about made me throw up.  I had to stick to liquids.

I think I still stayed pretty conservative, I was worried about mile 18-20 and if I could hold it together without cramping.  The miles just ticked off, and I still felt great.  This was crazy!

Starting off the lap I spotted my family, I stopped and turned around high fiving them, saying “just one more lap!”  I was too excited!  I was running strong.  Just after mile 22 I heard someone say something like “it was only 4:15pm.”  At this point I had no clue what the race time was, I started getting even more excited.  I just kept running, and running.  I saw coach Rich standing on the course, I asked him for some love, he gave me a high five and said “get it done!”  I ran the last 3 miles, it seemed like everyone was in my way.  I was swerving and dodging just trying to get to the finish.  I completed the loop and they directed me towards some parking lot and around the corner to the finish.  I clock was sub 9:50,  I had a smile on my face, I continued to run, high fiving everyone down the finishing shoot, including my family.  I don’t think I could have had a better day!

Go here to listen to Dan’s interview with Coach Rich

Nutrition Total 4472 Calories, 9659mg sodium
I pretty much followed the Jesse Kropelnicki, Core Diet plan from his EN webinar.   Here is what I calculated.