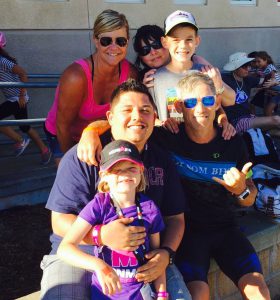 I’ve been racing long course triathlon and training with EN for the past 2 1/2 years. Vineman was my second full IM, my first was IMAZ ’14. I’ve also done two 70.3’s. Training started out slowly in 2016. I followed first the OS, then Get Faster EN plans from Nov – March. The intensity work didn’t seem to improve my FTP that much and I was frustrated early on  as I shared with coach P. It wasn’t until we switched to a short course plan, and eventually the last 12 weeks of IM ADV that I started to see my form finally come around. When it did, it was fantastic though. Eventually, only one or two of my regular ride buddies could hang and I started consistently dropping guys who were even with me just a year ago.

Priority one was the bike where I have the most room to improve, then running and last of course swimming. I made sure to hit my volume goals in the camp/ RR weeks and to really push myself on those Wednesday & ABP rides Solid race rehearsals and knowing what to expect this time compared to the great unknown of my first IM gave me confidence that I could beat my first IM time of 11:58, despite hillier bike and run profiles. The support and feedback from the EN community were also crucial to race preparation. Big thanks for that fellas & coach P.

So that’s the background, now about the race.The Vineman swim takes place in the shallow and relatively narrow Russian River, making navigation straightforward. Based on RR times, I went between the 1:00 and 1:05 groups in the self-seeded start. I mowed over some slow guys early, was kicked once or twice by guys passing me, but otherwise just held position. It was shallow enough in some spots to stand and walk but once I figured out that a super-high elbow technique had me passing the walkers, I went with that. The turn around seemed to come up quickly and I still felt good and in control so I just kept pulling long and strong all the way home. Noteworthy; the new sleeveless wetsuit really helped free up my stroke since I have more muscular arms and shoulders. My wife was pumped at the swim exit so I figured the time was solid.

T1 the volunteers were great at stripping wetsuits and clearing the way. I sat down in the changing tent just long enough to put shoes on, the remaining admin was done on the move. From recon, II know there’s a steep hill right at the mount line and predictably tons of guys fighting their machines struggling to mount and start climbing that quickly.  As planned, I ran clear up the first hill and past a couple riders before mounting. A spectator yelled, “smart, very smart” as I was clipping in and I almost crashed turning to say “thanks”!

My weakness! As mentioned earlier, I put in a ton of seat time getting faster on the bike. My plan called for NP of 165, pedestrian by EN veteran standards but real progress for me. As the bike leg unfolded, predictably rider after rider passed me. Vineman is a rolling course with a few bigger hills where everyone seemed intent on dancing on the pedals and racing each other uphill in the middle of nowhere. At times, I was going so easy that I happily whistled a tune as folks whizzed by me. If they were more experienced and faster, then I had no business chasing them, if they were overcooking the bike then I would run them down. Either way, with the 4 keys in my pocket my job was to stick with my strategy and practice patience and discipline

I followed the nutrition and hydration plan refined in rr’s and sweat tests and the miles passed quickly. By mile 90 I was still doing well, still staying aero and even starting to catch people. so different from IM #1, where I had lower back problems all day long and sat up for most of the bike. The regular strength and core training really paid off.With 7 miles to go, just as things were looking good and I was sure I would break 6 hrs, disaster struck. I punctured my rear tire on a nasty little tack. I sprang into action quickly but try as I might I could not get the tire changed. Everything that could go wrong in that moment did. First I couldn’t get the spare tube out of the aero bottle where I had crammed it for the first time ever (never try new stuff on race day, I know). Then I couldn’t remount the tire on the rim. Each time it was almost on, it popped off again and again four, then five times? I lost count then I lost it. I freaked out I admit it. Seven agonizing minutes later the wheels were finally rolling again.

Officials reported that multiple athletes flatted in same area. Allegedly some clown intentionally spread tacks on the road. If that’s true, words fail me especially since it happened at other IM’s this year.

As I finally got back up to speed, I glanced at my HR which had hung around 140 bpm all day and it had spiked to over 170 just standing there wresting that freaking tire! Those last five bike miles gave me just enough time to slow my pulse and get my head back in the game.

As I finally handed off my bike and ran to the changing tent I kept repeating my mantra; “get your sh#*t together, it’s an Ironman.” I had a zip lock go-bag inside the main bag with my visor, race number, salt tabs and the Coach Patrick run-saver bag. Once the shoes were on, I was out and moving quickly, doing the admin as I went.

It was a hot day my friends; 85 degrees, no shade and borderline muggy. The course consists of 3 out and backs with one significant half-mile hill in the middle, meaning we climbed that sucker 6 times total, and yeah that got old quick.;Lap one felt ok but seemed to take forever. Only 4 miles in I got my feet wet aggressively dumping water on myself. Then the special needs guys missed me twice and I never got to the dry socks or those skittles I was dreaming about. But after that nightmare flat, I figured if some blisters where my second biggest problem, then it was still going to be a good day.

As the miles ticked by, my wet left foot really started hurting and I knew I was tearing up my sole but I just didn’t care about anything but the finish.Keeping the run-saver bag full of ice and staying wet at all times were crucial to surviving the heat. That, and knowing that I had followed the bike plan almost exactly. By lap two I really found my rhythm and focus. Coming through the bottom of the course again I yelled to my cheering section “I’ll be right back!” In that moment, I knew I had it in the bag even with 8 miles to go because I was winning the mental game. It was highly satisfying passing so many familiar tri kits from the bike leg as they shuffled or worse, walked slowly along. Failure to plan is preparation for failure.

Total Time: 11:11:38. Hoped for a 10:XX but I will take the 45 min improvement.
All day long I was so fortunate to have my family cheering me on and to share the day with so many peeps from Endurance Nation and Folsom Bike Tri Team all supporting each other. That support and camaraderie meant the world. I won’t pretend to have this IM thing figured out, I know better. But that’s the beauty of it, so much left to learn, so much room to get faster and smarter. Now I do know I’m not a “one and done guy”. 2x Ironman sounds so much better. I can’t wait to build more FTP and crush that next bike leg. I spent 4 days in a wheelchair unable to put any pressure on the sole of my foot due to severe, nasty blisters. Pain is temporary, glory is forever.

Thanks for reading. Exorcise with Exercise.