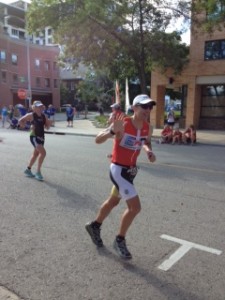 This is my first ever race report, so just go with me. The short of it is that I set a PR by about 45 minutes, shaving time in all three areas as well as the two transitions (booms all around). I finished at 11:14.xx and was 51 in my age group. Now the LONG version.

After last year’s IMWI, I decided I would do it again this year. Before my IM in 2013 was my first full year with EN, so I set a monster PR of just under 2 hours (yes, it does work) but wasn’t sure how I could get any better, since, you know, I was clearly already so awesome. The short version is that I did the out season, a bike focus (my weak spot as you will see), a get faster, a swim camp, and then into the IM plan. The big change was moving from intermediate to advanced. I also was using the core diet principles the entire time instead of just on the IM build up. I only did a consult with the core diet folks in 2013 on the build up to the IM. It helped me get more out of my training I firmly believe.

I went with the same plan as last year, arriving in town late Wednesday night. I did a quick run and then biked part of the course on Thursday with a swim on Friday morning. I listened to the 4k talk on Friday to help further dial in but then tried to stay away from it all as best I could to not get too keyed up (always a problem for me). My family showed up on Saturday and after a last supper, I felt pretty ready. I even was able to sleep that night. Who knew that was possible!

I woke up at way too early and had my pre race breakfast, love that applesauce! My wife drove me to transition (I think with only one eye open due to sleep deprivation, God love her) and after a few minutes I was basically ready. I found a quiet place in the Terrace to sit and tried to relax and think through my plan again. I went down for the picture about on time feeling nervous but ready.

My don’t tell anyone goal was to be faster than my practice swims which were 1:04 and change. After dealing with the salmon swimming upstream feeling of the mass start and getting into the open a bit, I was able to finally settle in. It honestly took me longer than I thought and only after I started to count strokes and try to stop thinking did it finally happen. I really found my grove on the LONG back length of the swim where I did very little sighting and just hit it. I made sure I was breathing every third stroke and had people on both sides of me. I honestly didn’t even notice the time when I got out of the water. After the whole race was done I checked the time and was surprised to see that I got it done in 1:03.xx.

I hit land and had the suit stripped. I was impressed with the folks flying by me up the helix. I guess they got all the cheeseburgers at the top because there weren’t any when I got there. I got in, put on my helmet and glasses and ran out with my shoes and food in hand (a great idea I stole from someone else’s race report). I tucked the food in my pockets as I ran and the shoes went on when I got to the bike. I was out in just under 8 min.

My super secret goal was to finish in under 6 hours after it took me around 6:15 the year before. My more formal execution goals were to keep my watts below 180 as best I could, and avoid huge spikes up the serious climbs. I only have so many gears so to minimize the wattage on the big climbs I just focused on cadence and pressure on my feet trying to be as easy as possible once I was in my easiest gear. On the second loop I would let my watts go as high as 200. I largely was able to stay in those confines and when my bike computer yelled at me, I would downshift. I felt like I was constantly checking to see how my legs felt and where I was at in the first loop, making sure I wasn’t blowing myself up. I might have gone too easy actually, but I thought that the better way to go. In the second loop I started to feel really good. I made sure to not let that go to my head and stuck to my watts limit but it felt nice to be moving past a good number of folks who had blown themselves up on the first loop. Watching the number of people who coasted downhill in the second loop in particular made me smile because I knew they were all dead meat.

Unfortunately my bike was not all rainbows and sunshine. I did get a red card for drafting, largely because I was being lazy I think. In a part of the course that rolls, I was going faster downhill while the guy in front of me was going faster on the uphill. I must have been too close as I accelerated on that downhill and rather than pass on the uphill I held back because I “knew” he would pull away again. It appears the course ref disagreed with my assessment. This did irk me for a while on the ride, but it is what it is and I could have had a lot worse happen to me on the ride. It did cost me though as my bike split was 6:02.xx, and if I had those 4 minutes I would have been under my super secret goal. Oh well, cheaters never prosper I guess. All in all, I stuck to my execution plan and learned a good lesson in the process.

Not much to report here other than the volunteer I worked with was a very nice person. I have a blister on a heel that won’t get better. So my plan was to Vaseline the ever loving tar out of it. As I tried to do 10 things at once, my volunteer became my Vaseline man. He also tracked me down with my sunglasses as I left the area without them. A very good man, thank you. I only put on socks and shoes in the chair and was out the door with my hat, race belt, and nutrition in my hands. As I started out I was basically putting myself together. Out in under 5 min.

For the run I also had a super secret goal of getting in under 4 hours, though I knew I would not sacrifice good execution/blow myself up to make that happen by going too early. I also switched this year to trying to stick with heart rate as opposed to pace. So I went with stay below 140 for the first 6 miles, and below 150 for the remainder until mile 18. Then cut it loose. At least that was the plan. As typical, the staying under 140 felt way too easy and I was being passed by everyone, so I knew I was doing it right. I had to laugh though by the number of those people who were already walking shortly after mile 6. Funny how that works. After mile 6, I could tell I still wasn’t quite there, so I stuck with HR about 140, with a few pops up to 142 or 143. When it got up to 143, my stomach would let me know, so I could tell that was probably the limit for now. It was around mile 11 or 12 I started to feel pretty good and slipped into a groove. My HR didn’t go up, so I was ok with it. In retrospect, I probably should have been a bit more concerned by it. Either that or I finally have learned what it means to “race”, at least for me. The reason I say that is because I constantly had to keep telling myself to back it down so that I would have something at mile 18. Only by the time mile 18 came I think I was about as fast I was going to get. I was moving at a good clip (for me at least) and was passing people, but I didn’t feel like I had another gear really to go into. I also hit the food wall at mile 19, same as last year. No more food meant a bit more perform so that I would have some calories to work with. As my vision started the whole narrowing in thing, a guy in my age group passed me around mile 20. He didn’t know this, but we were now racing. The problem was he was faster than me. The good news was he like the aid stations more than I did. We got in a pattern where he would run away from me and then walk in the aid stations. I would catch him there, do my quick walk through for what I needed and then go again. He would then catch and pass me again and so it went. Because we were racing (in my head at least), I decided I would skip the last two aid stations (only about a 1.5 mile run to the finish) which I thought I would be good without and would allow me to lose him for good. I rounded the bend for home, my vision got bigger again, I finished the run in 3:56.xx (super secret goal accomplished), and my final time was 11:14.xx. And I beat the guy who had no idea I was racing him by a minute. And my wife says I’m competitive! I also did check, and every one of my back half splits was faster than my front half.

I was pretty pumped by the result first off, but there were a few things I think I could work on to get better for my next race.

Once again I set a PR and was thrilled by it. I took a way a few lessons and will look to apply them next year. Thanks to PnR for all the help.