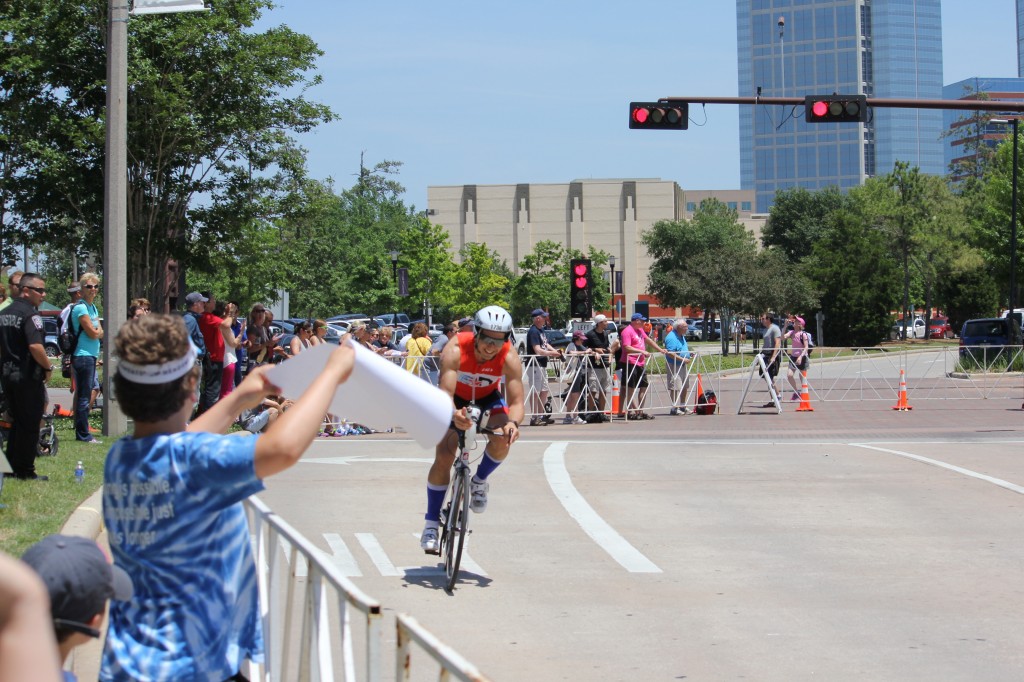 After CDA last year , raced a few more Olympics and local Half to finish the season. But then really dedicated myself to doing the Outseason right (had done it in ’12 but due to injury and other things going on could not do it as I wanted.

Had a really great Nov OS (in spite of doing many workouts in freezing cold and very late at night..) doing basically everything in the Advanced program and got my FTP up from 195 to 244 and my VDot from 45 to 48. Practically no swimming then. Really happy I was practically injury free.

Entered Texas Group for 12 final weeks and followed most of it but missed some workouts/race rehearsals due to work travel and weather. Also dealt with some minor knee/leg pain that I had to manage and did not push too much (listening to my body !)

Had a week (Spring Break in March) when we went to Floridawith Family that I also used as Big Tri Week and allowed me to get exposed to heat and test myself a little bit in race similar conditions. That week I also did an Olympic race in Clermont,Fla and it went very well finishing in 2:25 without really pushing it other than 0.8 Bike IF

Having tapered and feeling great, had a little incident on Sunday the week before race when while going up the stairs at home carrying my 5 year old my knee tweaked and gave me some pain that would not go away the whole week and worried me a lot going into the race with the ghost of not being able to do it of finish looming.

Arrived Wednesday. Rented a house with Mike Weinmann and both our families (4 adults – 6 kids) ,(same one we did in 2012 in Lake Conroe, 30 miles away from the Expo ! That was an issue though because with the family 9some picked up at airport latar) it was hard to go into the team events/dinner and even the swim practice. Had great Fajitas that day, kept hydrated
On Thursday, we checked in, picked up our bikes and did some course recon of what we thought was the bad chip seal between miles 65 and 72…and felt it was not that bad. Discovered later that there were much worse parts.

Again I was very careful with my knee testing it but not too hard. I was glad not to have any significant pain. Later that day tested knee again running 3.5 miles at LRP and again no catastrophic pain, only a nuisance, but still worried.

Also during bike : 1 flask EFS Liquid Shot, 1 Clif Shot Blocks 6pack + 4 gels (2 caffeinated)
Total was about 2200 calories – Strategy was to take either cocktail sip or one of the others every 15 mins.

Said goodbye to the family and mi friends and Mike and I walked to the chute to get into water.
Got in the water with about 5 minutes to spare and grabbed kayak towards the left where there was not a lot of people but got crowded quickly. Moved further left and saw that I could pretty much float and did not need to grab anything and did find a not too crowded spot.

Race started and got going pretty fast (plan was to push a bit to get out of the initial mess) and succeeded avoiding a lot of bumping into other people. I had almost no contact and settled in a very good rhythm (I felt) for most of the yellow buoys at the beginning and swam an almost straight line always close to them. When I got closer to the red turn buoys I started going right and again there was very few people as almost everyone had started moving right earlier.

I noticed many people kept going straight to the second buoy and never turned to get where they needed to be, cutting significant distance from their race. During and after the turns it got really crowded but was able to hold my pace. Took a shot to the left goggle but happily it stayed in place.

Once in the canal…the swim would never end…but I had felt the same in 2012. Was very happy coming out of the water by 1:12

We had this planned with Mike and we had eliminated anything we did not need. Strippers did their job well, grabbed bag and went into tent. Found a chair and sat to get going. Unfortunately volunteers were not close to where I sat and I did not have one assisting me (opportunity to improve). I did everything pretty fast, lost a little time fitting my EFS flask in the jersey side pocket (could not find it quickly enough). Put everything back in bag and handed to volunteer, Run out the same way I had run in. Got sunscreen on by volunteers as I was passing and got to bike. Turn on computer and went on. I am surprised that in 2012 this same transition took me 9 minutes…what the heck was I doing that long??? (don’t know, I never wrote a race report)

No problems mounting. Most of my bike was pretty uneventful and executed as planned trying to keep power constant and not speed like I had done in previous Ironmans. Started targeting 0.65-0.7 IF (165W) and was OK getting that out of my legs from the get go. Wind seemed to be helping a little bit so I constantly checked that I was still delivering power as planned.

Nutrition execution was very good and other than slipping one or two minutes a few times from the 15’ intervals planned I did it correctly.

Every aid station I took a bottle of water and refilled my front aero bottle (I drank the whole thing in between) and later on used what was left in the bottle to cool my body/head (the Lazer helmet has a hole specially for that).

As I expected I saw tons of riders passing me on the uphills, but I stayed at steady power and did not care. It’s funny (now..) how you see some people that look like this is the first race pushing, standing on their pedals at mile 20 and you want to scream “don’t do that !!” … but there were just too many…

Few minutes later I was passing them in the downhill parts and then later I would not see them again.

Some unusual events were that after passing a construction site, 4 huge trucks came into the road and passed us very close scaring a lot of people that almost fell. Another one was this semi carrying a huge pipe that came into the road about a mile ahead of me and was going really slowly using the shoulder and most of our lane, I had to pass it carefully because there was traffic coming from the other lane but while doing that hit the rumble strips in the middle of both lanes and that was scary as I almost pass out from the strong vibration …I swerved to the side and was able to complete the pass.

On another note I was on the aero position 99% of the time. While I rode I was also projecting and trying to see if I was in target to my goal times always pessimistically because I knew that the wind would come, but as I went and wind came (not as strong as I had thought it would) I was surprising myself with the time I was projecting and that I was going to be more than 10-12 minutes under 6:00.

I finally finished with 0.649 IF but really importantly, knee had behaved, I was feeling much better than last time, passing people during most of the last 25 miles and ready to run !

I was really happy when I entered T2 that a mere 7 hours had passed from the start. I still was concerned that my knee was going to give me issues during run. Again missed to get a volunteer to help but I thought it was not that bad because I already had helmet and shoes in my hand and all I had to get from bag was the running shoes and then a zip loc bag with everything else that I would empty as I left running. Worked fine, no issues.

Was wearing a hat that can hold ice and quickly got another volunteer assisted sunscreen bath and left. 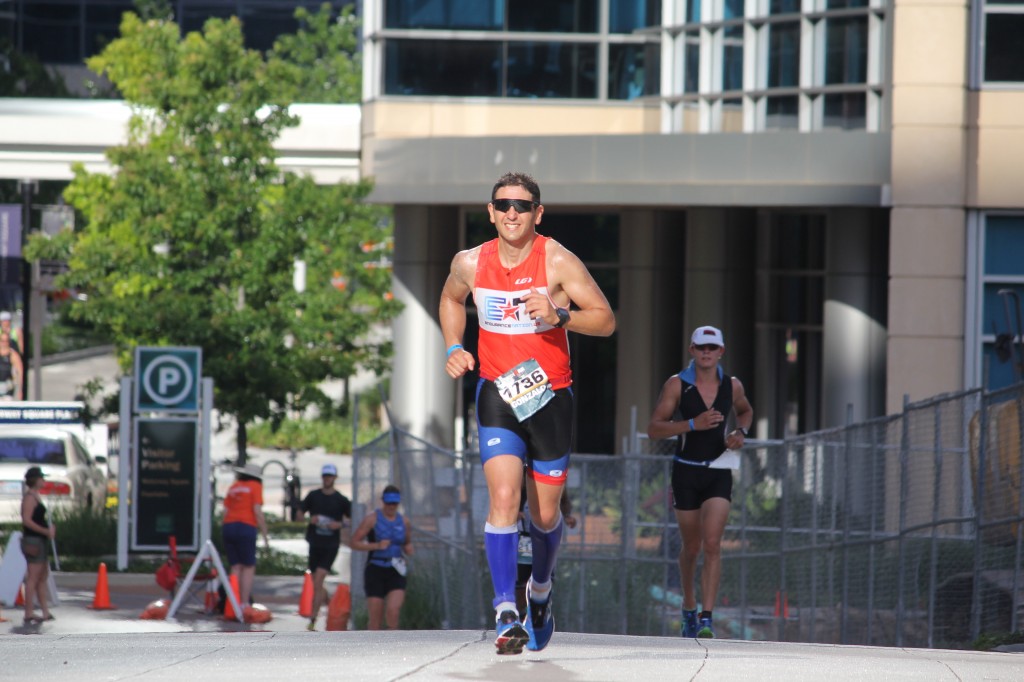 I felt surprisingly strong when I started the run, I did not feel the stiffness I was used to feel when you start running after being aero on the bike for so long. Goal was that I was going to start on LRP of 8:39 (averaging 9:00 by walking the aid station)and keep it for at least 10-12 miles and then see how I felt and maybe push for more, then after the 20th mile see what I had left and let it all out.

Plan was to walk the length of the aid stations to recover HR and cool down.

I also walked the little dirt hill up after the turn around. Saw Coach Patrick who told me to keep ice in hat and keep HR managed. And I did…because for some reason my Garmin was not giving me the Pace information…something related to the Multisport mode that I had not set up right. But looking back that was a good thing because it made me focus a lot more in managing the HR. Without knowing I was doing 8:15 to 8:30 and then when walking the station averaging 9:00 or less, that I tracked with the total time divided the miles I had done.

The waterway running was awesome feeling all the people there and seeing my family in every loop also was great.

By mile 15 has to stop and pee (only time) and then kept with the plan. By mile 18-20 I started slowing down a little bit but as I saw that I was leading a good time versus my goal I did not push too much (I regret that a little bit now).

Also, in my mind I was really happy my knee was not really giving me trouble and I did not want to create an issue. So, my first half was about 2:03 and the 2nd half 2:09.

My first walk (other than the aid station ) was at mile 25 to get ready for the finish…I made sure I finished running fast and passed 5 people in the last 500 feet or so! 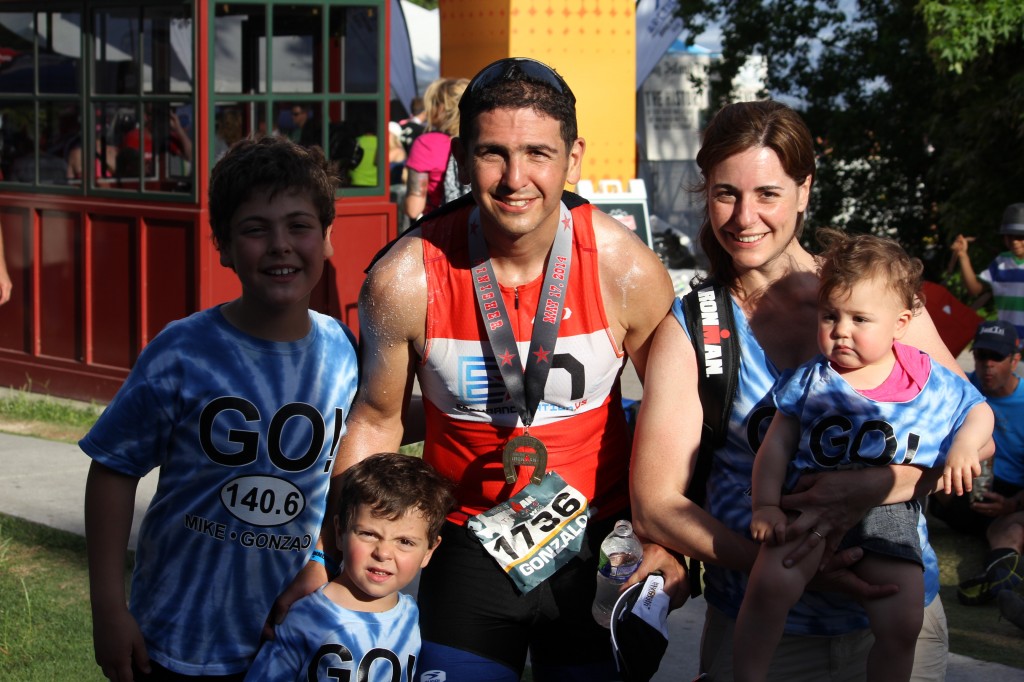 In the end I was really happy after doing this in almost exactly 2 hours less than 2012 and PR’ing vs my best Ironman® time by 1hr24min ! I can say I was also a bit surprised it went that well!

Thank You all ! I am already looking forward to my next Ironman® (next year location TBD)

For the rest of the year I have planned several things…. Mid June: 5 day Expedition to Climb Mount Rainier (14500ft), end of June : ITU Chicago Olympic, End of July : Challenge new Albany Half and in September : IM Princeton 70.3.
See you at the races !!!