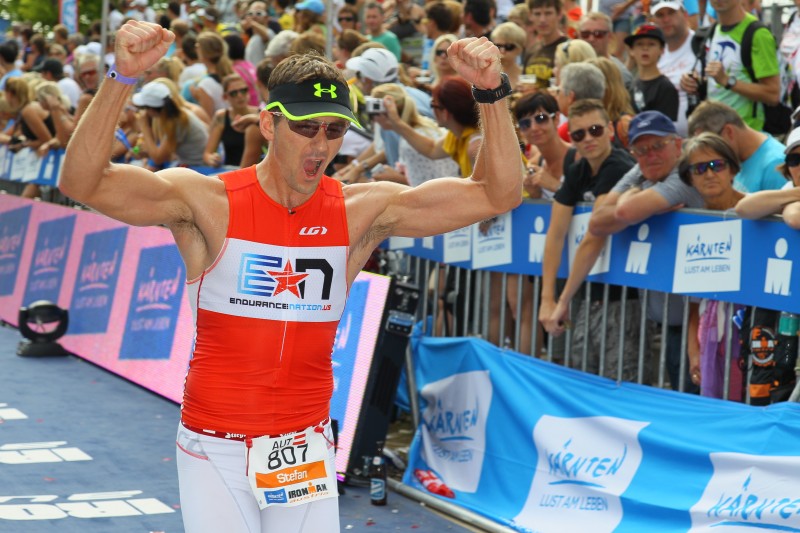 I started the week with 3 days of high fat/protein and low carbs nutrition in order to support carbo-loading on the last 2 days before the race. Everything was working out great an I also managed to have a swim every day and get in all other WKOs as planned.
Unfortunately my little son brought back home some nasty virus from the kindergarden that caused some issues with my stomach on Wednesday and Thursday…everyone in the house was having the same issues so it wasn’t just some kind of “nervous” reaction to my race. Started carbo-loading on Friday with the aid of “Sponsor Carbo-Loader” and a lot of noodles. Felt really nasty all the day as I was just forcing myself to eat all the time. Continued on Saturday with reduced amount of food volume but still a LOT of carbs.

1st wakeup @ 1:45am to put in 150gr of Powerbar Recovery powder (appr. 580kCal) then back to bed.
2nd wakeup @ 4:00am heaving some light breakfast and a coffee. Had to go to the toilet twice before I left.
Headed down to transition area to prepare my bike and check my bags a second time – everything fine – left T-area around 6:00am.
Did a short swim WU from 6:15-6:30 then just went through the most important things for swim multiple times. Ate one gel at 6:45 with some sips of water.
Felt really great, strong and READY

Holy cow that was a swim! Started out moderate for the first 100-200m then picked it up a little to moderate-hard. At that point I was wondering that there wasn’t any “fight” in the water – very nice and smooth swimming. After a few more minutes the big fight started … I got hit by someone beside me on the head which made my right eye goggle to be filled with some water. Really rough swim here so I decided to really push some HARD minutes to get away from this crowd which worked out perfect. Even the water in my goggle was gone for some unknown reason. Found some nice group to draft and just kept on swimming with them as the pace felt moderate. Awesome swim time – never expected to be that fast when swimming with Neo in a big group!

Just execution as usual – get in and get out nothing special here! As my swim was much faster as usual I was amazed to see so many bikes still waiting there.

Couldn’t start out as easy as I planned todo as there were so many slower peeps already on the road which I had to pass-by in time to avoid a possible penalty.
Found my ridin’ rythm quiet quickly after around 20 minutes and just executed bike-split from there. Everything worked perfectly … power output was steady at around 73-75%, nutrition and hydration also perfect in plan. At around 1:30 on the bike I thought I feel the need I’d to pee but for some reason it didn’t worked. I thougth ok it must be something else … let’s just stick to the plan and go on.

Power was still at desired level and also RPE was very “low” so I was very confident. At the end of the first round I still felt very good but the need to pee was increasing so I decided to use the first longer downhill section for this …when I arrived there I tried again to pee but failed again. I knew I already drank A LOT so it really started to “hurt” somehow and I also knew that stopping drinking was not an option. From that point I used every downhill section to just coast and bring me some relief … due to all that coasting the average power output dropped significantly and I’m pretty sure I lost ~5 minutes just because of that!

Put bike back and directly moved to the first toilet to have an incredible nice and huge pee. At this point I was sure this will fix my abdominal anxiety feeling.

Heading out of T2 I first switched my Garmin to Pace to see an impressive 4:0x/km after just a few meters so I slowed down massively to my targeted 5:10/km. Dozens of people were just flying by me and I really had to recall all my race execution knowledge to not speed up too much. Even though I found myself getting faster slightly so I kept checking my watch more often. After 4km I found my pace but I also faced a more problematic abdominal situation as I consumed one gel after 30min/6km.

Good that I made my homework and read through all the WIKI pages on EN. Often I switched my nutrition strategy to Coke+Water only, and I also walked all aid stations I used for drinking instead of jogging through them.

THESE 2 steps really saved my day!!

I wasn’t able to complete fix my abdominal issues until the finish line but it improved somehow so I could concentrate on my running style always thinking of “gliding” and using my arms to keep step frequency up high.

On the second round at 32km I just said to myself no I only have to run an easy 10k run which I did already 100x. From this point on I just focused on every SINGLE kilometer trying to keep running steady as RPE was slightly increasing. Autolap after every km gave me an imediatly feedback which also helped my mentally (like a “Good work boy – keep going like this”). At 35km I really felt I’ve to visit a toilet but all of them where used when I came there so I just kept on running. At 38km I said to myself that there is a nice toilet right behind the finish line and now it’s time to RUN so I increased my pace to slightly below 4:50 (which is my LRP) for the last few kilometers.