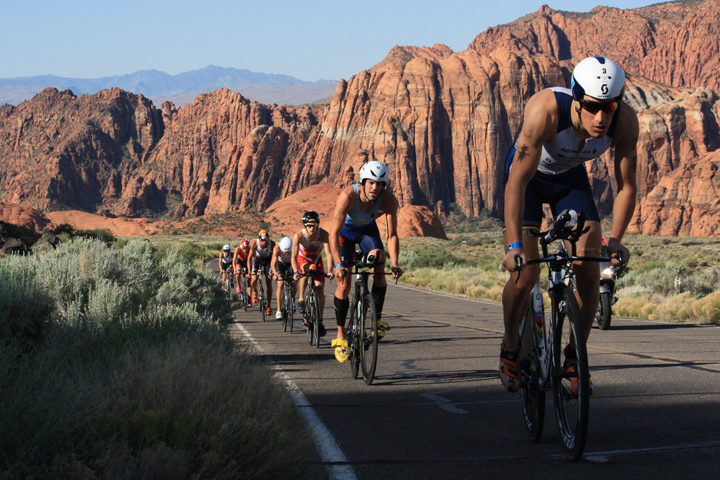 In Part I we discussed the considerations for training the bike and run in hills. Let’s now turn our attention to racing a hilly course properly.

Think of your legs as books of matches. The number of matches in your legs is finite, you only have so many to burn. Every time you spike your effort, significantly increasing your intensity for even a brief time, you burn a match. Your job when racing a triathlon is to burn your matches wisely, applying them to the course in a manner that yields the best result, and ideally burning your very last match with your last step across the finish line.

It’s not difficult to understand that the longer the race the more stingy we need to be with where, how, and if we even burn a match. A steady effort that minimizes surges in power is the best strategy for limiting the number of matches burned on the bike, ensuring that we have enough matches remaining to spend on the run course.

The most risky terrain feature you’ll encounter on a triathlon bike course is a hill. It can be extremely difficult to properly gauge your effort on a hill, particularly at the start of the hill:

We teach our athletes to ride steady, to flatten hills through disciplined and increased self awareness. Divide the hill into four parts:

The Entrance
As you’re riding across flat ground and approach a hill, you’ll feel the bike and cadence slow down. We want you to immediately do two things:

The Climb
Shift, shift, shift and eventually you run out of gears, settling into your effort. You’re now simply climbing up the hill. Your heart rate may or may not have time to rise to reflect your true effort. But when asking yourself how hard to ride a particular hill, always frame the question within the requirement to run well off the bike. “How hard should I ride this 3′ long hill at mile 50, given my requirement to ride another 62 miles AND run a hilly marathon?” When you ask the question like this, the answer is pretty much always “ride the hill comfortably and save it for the run.”

The Crest
As you near the crest of the hill, the grade of the road will decrease and your bike will accelerate. We want you to do two things:

The Descent
Take this climbing effort above and simple extend it across the crest, into the descent, shifting quickly up in the gears and staying on the gas until you spin out, only coasting when you’re riding faster than about 34-35mph. This speed then carries you across the flats, into the next hill, and the next hill, etc. Think “conservation of momentum.”

Meanwhile everyone else will begin coasting at a much lower speed, giving up this free speed opportunity.

Know Where the Hills Are

The longer the race, the more important it is to know where and how the hills are. And if the hills are near the end of the run course (for example, Ironman Lake Placid and Chattanooga) this becomes the driving factor for the rest of the race. It’s critical that you race the bike and early miles of the run in a manner that sets you up to be successful in these late hills. The cost of failure on hills in the last miles of an Ironman can very quickly shatter the gains of your shiny bike split or your sparkling performance in the first 6 miles of the run.

Over time, through miles and miles of simply paying attention to interactions between pace, heart rate, and RPE, you’ll gain an awareness of your body that will guide you on a hilly run course. For example, you’re running 9′ pace on flat ground at heart rate X and RPE #Y. As the road goes up, shift your attention away from pace and more towards HR and RPE, keeping them within a reasonable range of what you were experiencing on the flats. Yes, you may be required to run a bit harder but the key is to be very self-aware, running only as hard as you should, not as you could.

In the end, racing well on a hilly triathlon course is about increased self awareness and discipline: knowing how hard you’re working, at all times, and having the discipline to perhaps do less work despite everyone else around you often working very, very hard.