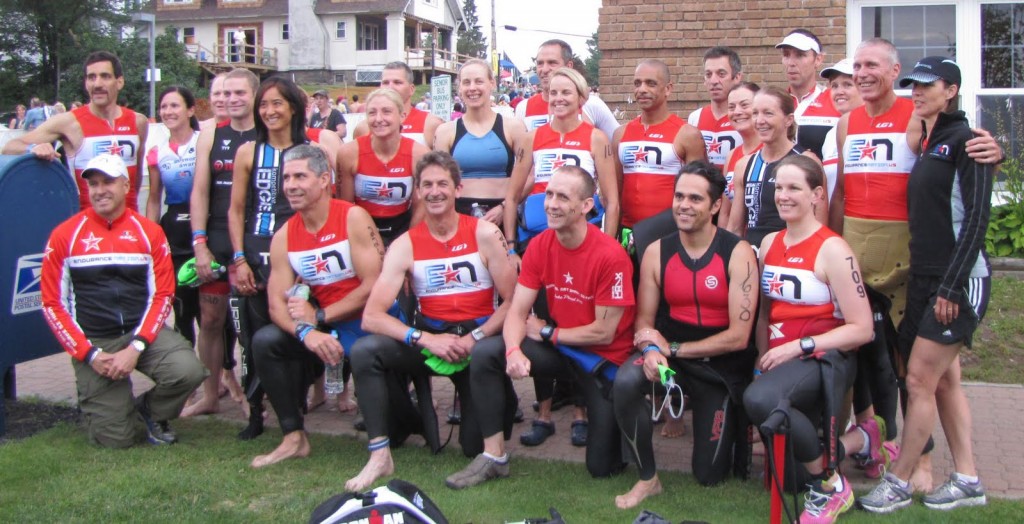 The 2013 edition of Lake Placid will be a race I will likely never forget. With more than 100 athletes, between TeamEN and our training plan customers, race day felt more like a giant party than the premier endurance event of the Northeast US. From multiple age group winners to first-time finishers, to many, many PR performances, Endurance Nation crushed it.

For the 2nd year in a row, we held a dinner at the conference center attached to the Olympic ice skating rink. This is a fantastic facility — staff, setting, and the food were all superb. While race weekend is certainly an exciting part of being a coach, few things, if any, beat the general awesomeness of having over 100 people in a room. Athletes, friends, family members… it really drives home what this sport is all about.

The Endurance Nation coaches have been delivering their Four Keys Talk, free, every year since 2006 to about 100-130 athletes in the grass by the swim start. This year we pulled out all of the stops, reserving the Palace Theater on Main Street as the venue, with a total capacity of 290 people. Thanks to some great creative marketing and on-site activities (such as free Starbucks coffee), we were able to fill the event online…with approximately 225 people attending.

This essentially makes the Lake Placid 2013 Four Keys Talk the single most popular pre-race talk we have ever done. Feedback from the attendees confirmed our suspicions: a strong PowerPoint slide deck and quiet, focused atmosphere made the presentation more powerful and effective. In addition to our talk, attendees also won some sweet free swag from our sponsors. 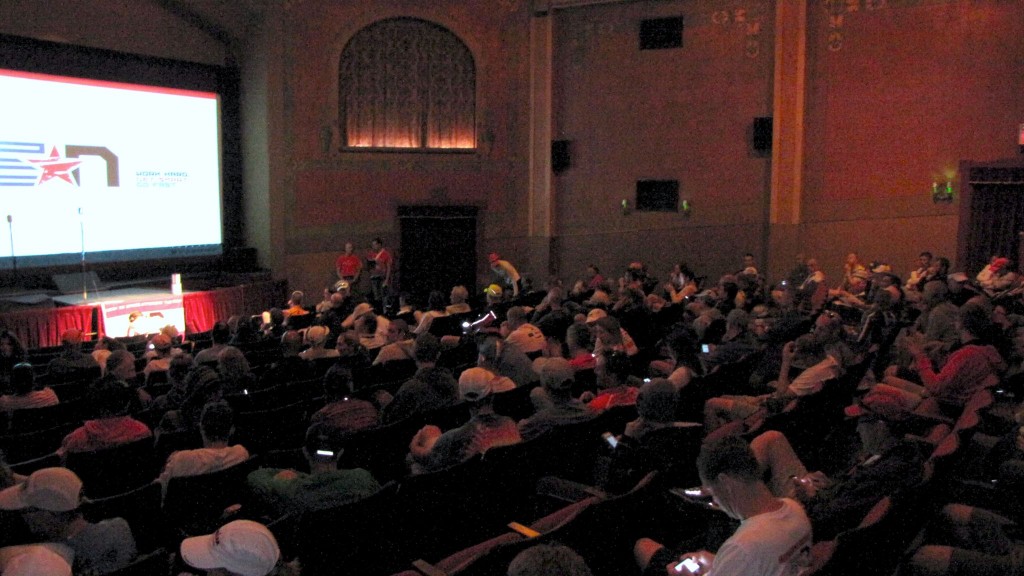 Coach Patrick introduced Endurance Nation and our objectives for the talk. Next, Coach Rich ran through our Four Keys of Race Executionguidance. Finally, Patrick gave everyone a very detailed walkthru of the Lake Placid swim, bike, and run courses. Having led over ten camps on the course, raced Placid eight times and qualified for Kona twice at this event, Patrick knows Lake Placid inside and out.

The effectiveness of the talk was confirmed by the many, many compliments, handshakes, and tales of races made as we were behind to finish line on Sunday to greet our athletes.

After the talk, there was a viewing of the documentary Triathlon: Through the Eyes of the Elite. This film was generously provided by our friends and sponsors at Endurance Films.

We plan on continuing to grow our Four Keys of Race Executiontalks, with the next stop being Madison, Wisconsin for the Ironman® in September. You can RSVP to the FREE talk, Friday September 6th, 2013 at 10:30am online here.  Space is limited so act quickly!

Saturday – One day to race day

With less than 24 hours to go, there is an awful lot on an athlete’s mind heading into the race. There’s check in, fueling, and equipment once overs. As a coach, you see it all, and you definitely see it when you have more than 70 people racing. Thankfully no one had really any major issues with their equipment or set up.

That certainly did not stop the questions from flying on our group chat line. Lots of Team Endurance Nation athletes wondering what the competition was doing with their bottles, tires, computers, and in general. Our basic guidelines to say that 90% of the people are doing things wrong – which usually applies to raceday – but in this case applied to the day before as well.

The weather forecast was coming in positive, and after a light dinner most people turned in early.

This was it, the big deal, the whole enchilada. After a quick team pre-race picture, Lake Placid 2013 was underway with perfect temps and overcast skies.

Lake Placid was the site of the first Swim Smart initiative in the Northeast. It seemed to go off without a hitch — it took just 16 minutes to get everyone in the water. Listening to the athletes afterwards, it was unclear as to whether or not the swim start afforded a more comfortable experience. While some athletes spoke of open water, many others still experienced a lot of physical contact. Interestingly enough, some of the faster swimmers faced bottlenecks on the start of the second lap due to the two loop nature of the course and the speed at which they were swimming. A minor problem for sure, and hopefully a sign that the Bike Course would be more open than usual once everyone got on two wheels.

Few appreciate the difficulty inherent in covering almost 500 yards from the lake to the transition area. Yet this is how the ironman Lake Placid course is laid out: plenty of green astroturf, lots of puddles, and screaming fans to guide you down the chute to where you can change.

My favorite place to be is the Bike Mount Line. At Ironman® Lake Placid, this area is both narrow, steep, and wet for 2013, requiring great attention to detail. There were certainly some very patient and experienced athletes making it look easy, but there were also a number of people making it difficult. From athletes screaming at one another, to athletes not understanding where the mount line was and literally riding their bicycles out of the transition area, to athletes with the wrong cleats for their pedals, it was an entertaining 60 minutes. 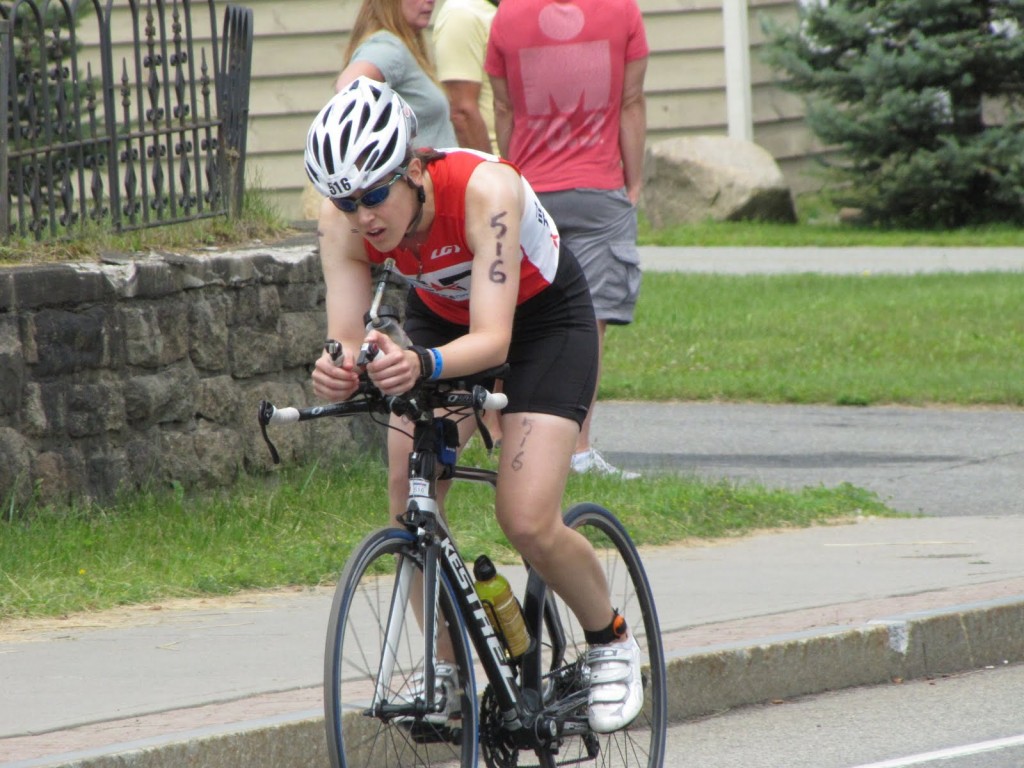 By all accounts the bike was perfect on this day. The overcast skies held throughout the entire ride, with only a few sprinkling showers to break things up. No deluge to make things dangerous.

Looking at the time from lap to lap, most athletes were able to stay very consistent both on the descent and on the flats. Any winds that hurt the riders were really only present over the final 20 miles, which includes the climb into town at the end of lap number two. Given how we instruct our athletes to pace the bike, we couldn’t have asked for a better day from a riding perspective. 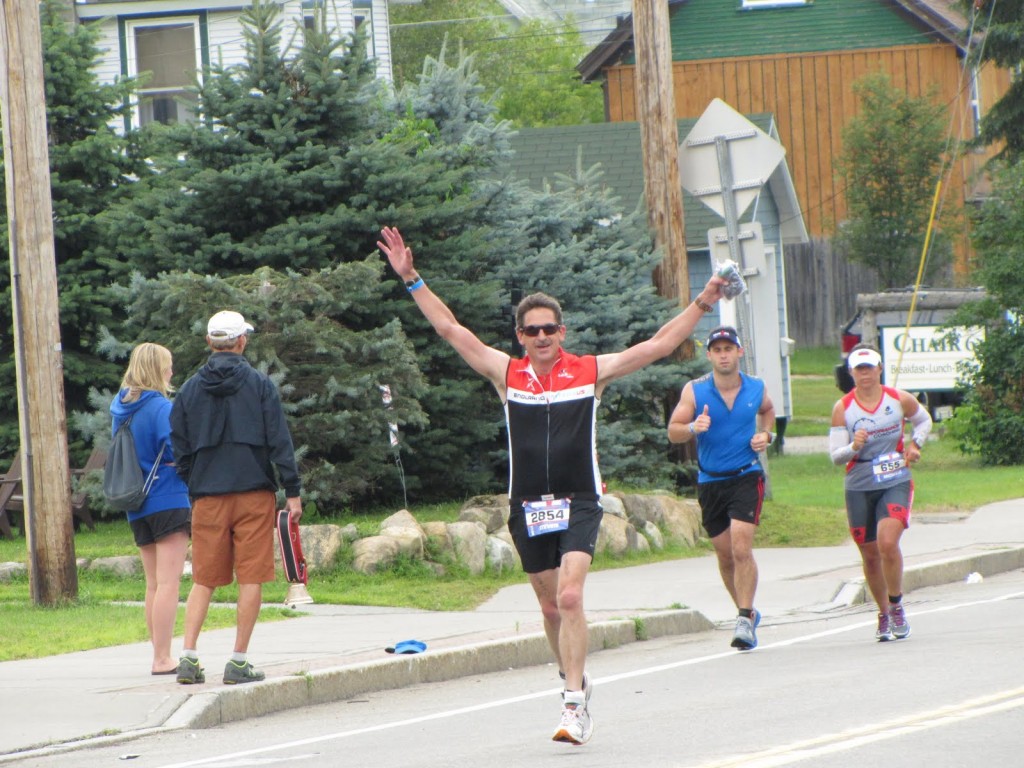 Or as we like to say inside Endurance Nation, “20 miles of hope and 6 miles of reality.” It was very clear from the outset that even perfect conditions on the bike could not offset the extreme fatigue and challenge of completing Ironman.

Both TeamEN athletes and other racers alike showed signs of serious stress. The way that the Lake Placid run course is designed, the first 5 3/4 miles are net downhill to the turnaround. Of course this means the return trip into – and out the other side of – town is significantly challenging. As expected, lap two times were significantly slower the lap one. Each athlete’s ability to keep the run splits closer together was a function of how they paced the bike as well as how they handled the first lap. I am very proud to say that most Endurance Nation athletes were close to an even split or within the five-minute range of a positive split that we require on the bike.

Just like any Ironman® competition, at some point in time it goes from being a race to being a slugfest. This is the part of the day that I love the most as a coach, when you get to see how your athletes truly can perform under stress. TeamEN athletes did not disappoint: from those who won the age group to those who finished as first timers to those who set massive two hour plus personal bests… Every single one of them made me proud.

It’s not what the clock says when you get to the finish line… It’s what your heart says that you’ve given. I can truly say that every Endurance Nation athlete gave 110% on race day.

It’s time for me to head over to the forums, find some race reports, and start analyzing some data. This is quite possibly the most important part of any athlete season: the recap. We have so few opportunities to learn that each one is important and should be cherished.

While Lake Placid is not one of our 2014 key races, it will still be on the calendar to chew its place in the history of North American Ironman.

If you’re interested in learning more about the team, and how we train our athletes to be fitter, faster, and stronger in fewer hours, please join our waitlist. 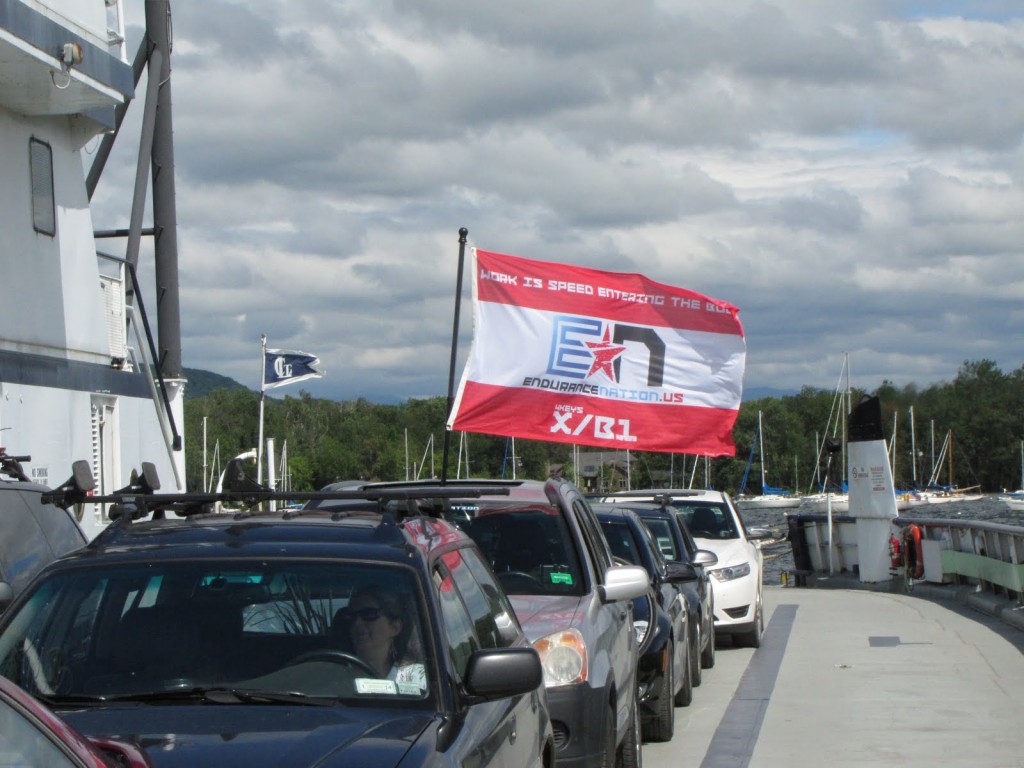