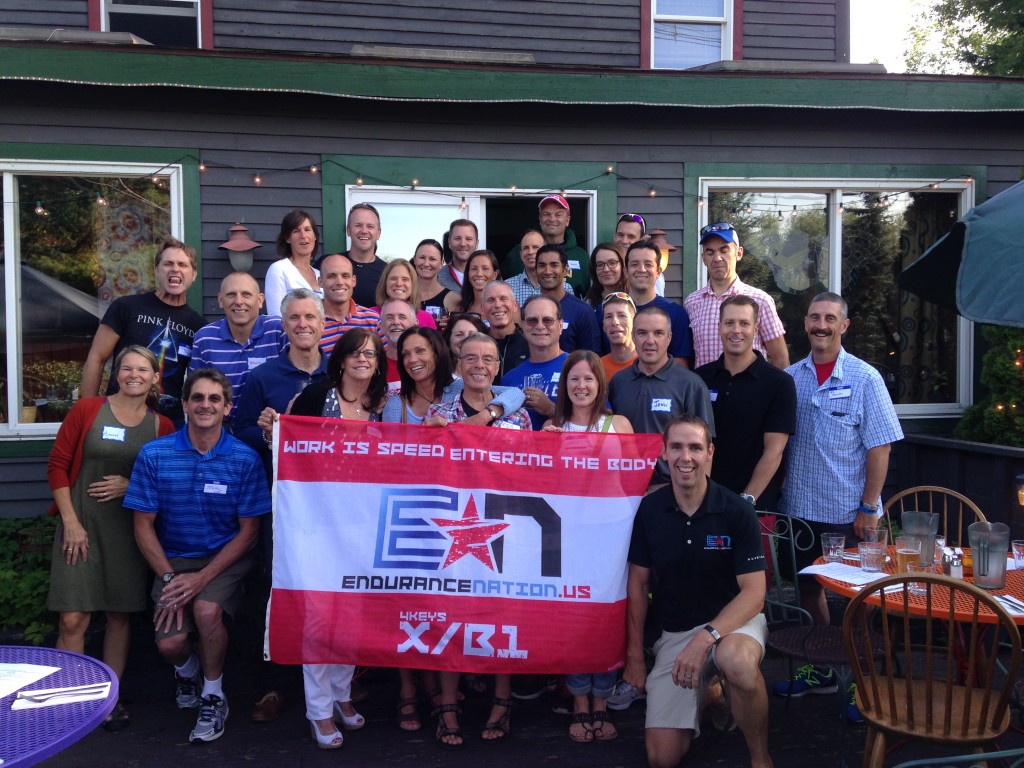 The weekend kicked off with a great Team dinner at The Cowboy, many thanks to Race Captain Simon Shurey for making that happen. As you can see from the photo above, it was a raucous affair — we took over the entire restaurant for several hours and we make the most of it — we ate, we drank, we laughed…a good reminder of all the awesome stuff that makes our community and team so special. 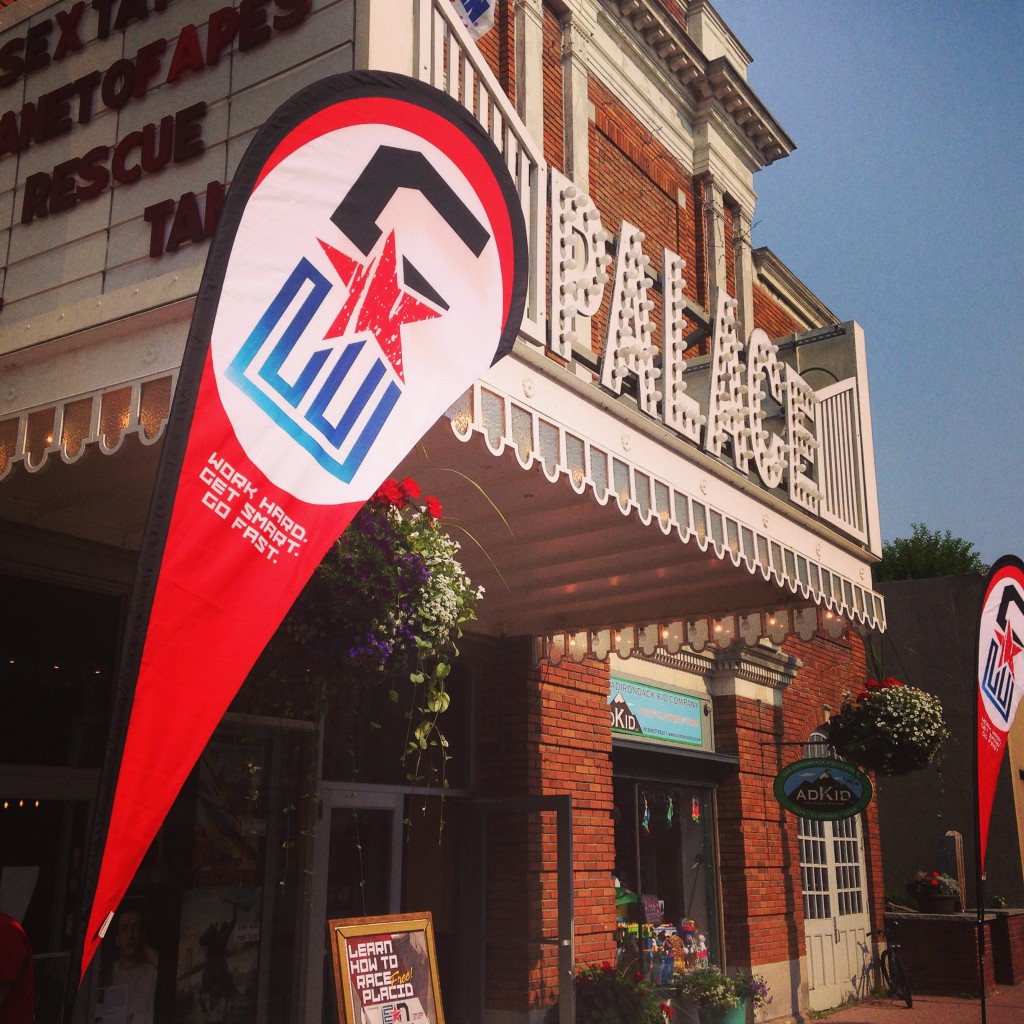 Then we had another epic Four Keys talk at the Palace Theater in downtown Lake Placid. More than 200 athletes were on hand to get schooled on the best way to make the most of their 140.6-mile journey. We have done this talk for the better part of a decade, but this is only our second trip to the Palace Theater — which we love! As usual we requested donations for the talk, raising $500 for the theater to finalize their conversion to a 100% digital operation.

Some highlights from the talk included: 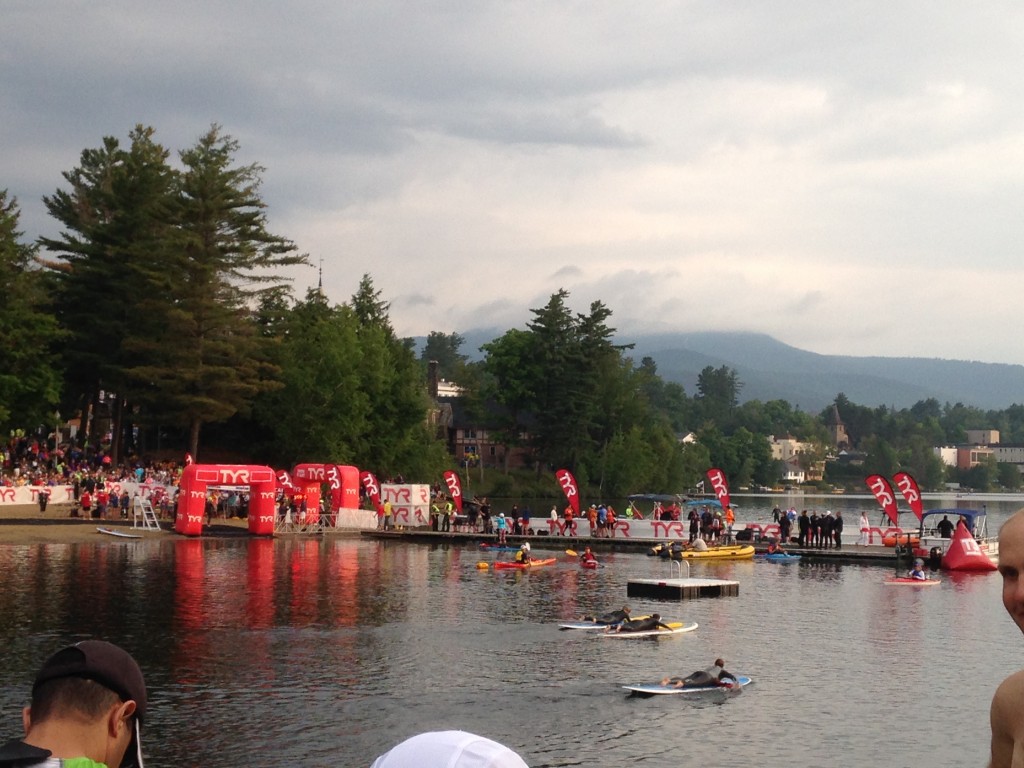 The Calm Before the Storm

Things started off innocently enough, with some sunlight and ideal conditions. Here you can see the swim exit area (foreground) with the volunteer boarders headed out to keep the peace during the swim.

But all of this was about to change drastically in less than an hour. 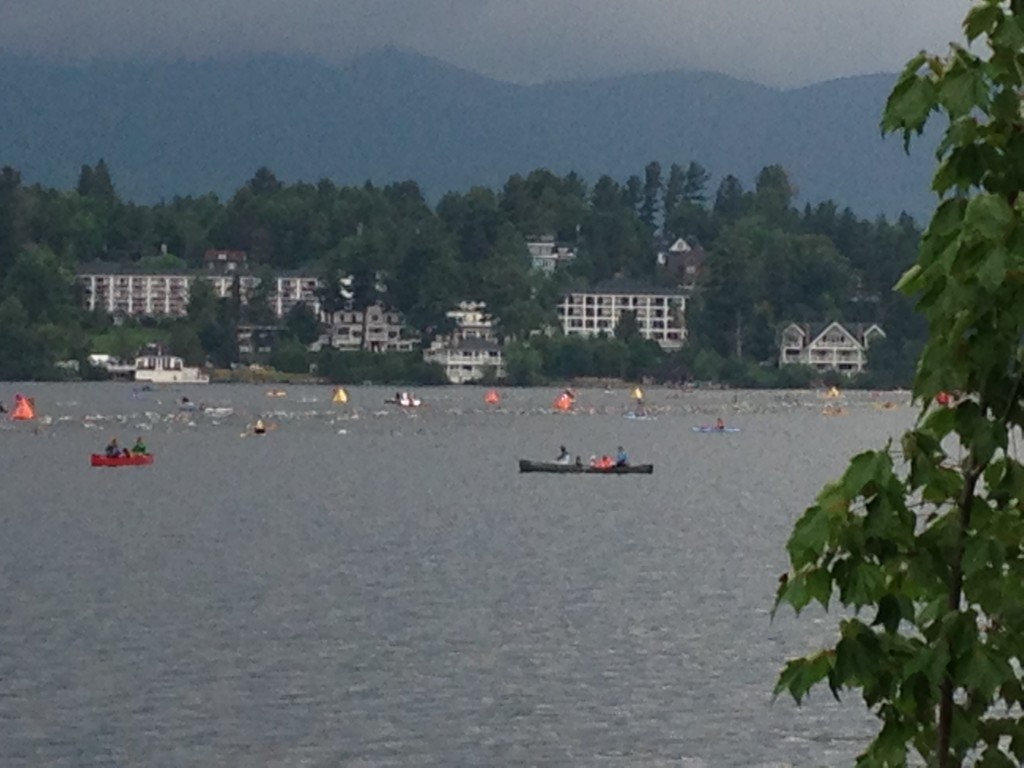 As you can tell vs the Pre Swim picture above, things were looking pretty darn bleak as the swim was underway. This was about 30 minutes into the swim, roughly 7am. The storm had been advertised as bad, but strangely enough there was no pre-race announcements re inclement weather, etc.

For now everyone seems okay…but when the lightning hits, race officials moved super quickly to get all of the swimmers out of the lake. If you swam slower than a 1:25, you were directed to the closest exit from the swim. For many this was a random dock / house that bordered  Mirror Lake Drive (right side of picture above).

Conflicting reports from competitors abound; some were told to just wait. Others were told to head down Mirror Lake Drive, past special needs, into transition. Others just ran it.

Regardless, this mass exodus – executed very well by all accounts! – had almost 1,000 athletes enter transition at roughly the same time. Needless to say everyone was overwhelmed, with massive lines forming at the tents as well as the bike mount line.

Normally I wouldn’t report from the Bike Mount line but, it was an apt experience for what racers were about to endure over the first 30 miles of the bike, which includes the major descents into Keene.

From about 8am until 9:30am, the rain was coming down really really hard. It made it hard to see much of anything, and competitors had a tough time just managing their watches and sunglasses, much less their bikes!

The lightning and thunder and rain continued for all through the first part of the first loop. This meant cycling through standing water — and lots of debris (aka flat tire heaven!) — and dealing with some seriously reduced temperatures. After all, cold lycra plus winds from riding over 30 mph on a descent mean your perceived temperature is well below freezing.

There were a few crashes on the descent, including one of our own athletes, who appears to be okay today after having to drop out of the race. Another good friend from Rhode Island stopped at the first aid station for thirty minutes…to warm up…and still managed a 30-minute personal best!!!

The ride got harder across the day due to the swinging temperatures due to the passing clouds. When the sun was out, it was quite hot…and steamy. But when the clouds came through – including another heavy shower at about 2pm – the temperature would plummet. I think this really made managing nutrition difficult, as it was hard to use how you felt to gauge what you needed. Only the most “race ready” competitors were able to navigate this situation properly…and to handle the typical increased winds of the second lap. 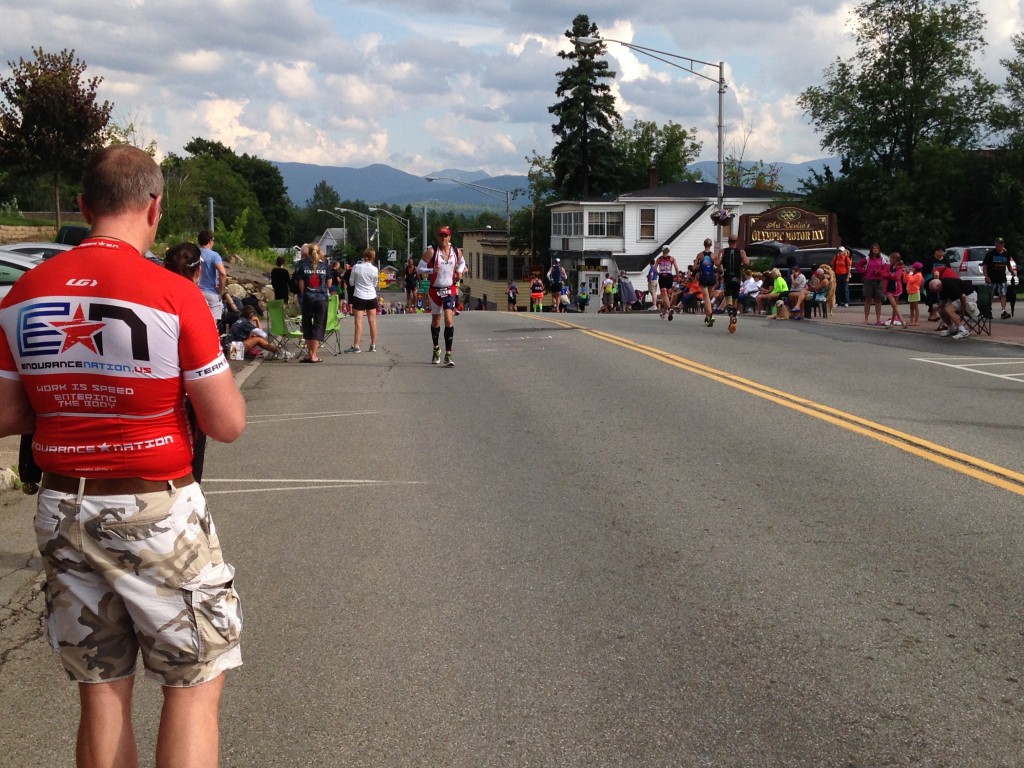 By the time most of the athletes were on the run, the heat was in full effect. As you can see from the photo above, there were no umbrellas in sight…the mountains were in full effect…and it was time to suffer!

The Lake Placid course did not fail to disappoint, with plenty of room to both run and shuffle your way around the complete 26.2 mile course. The cooler temps on the bike meant that folks had a slightly better chance to run well — vs having to sweat it out and suffer on the bike as well as the run — but none of them will tell you that about their day!

We spent the better part of the day at the mid-point of the run course. This is a great spot to see the runners head out of T2 as well as return to town up the dreaded one-mile-hill that dominates the run course.

One of the biggest parts of my day as a coach is seeing the athletes at the finish line. There is nothing better than seeing the raw emotion and hearing the unfiltered stories about the day — in my opinion it is this finish experience that really sets an Ironman®  event apart from any other endurance experience.

I was busy between 5:30 and 10:30, talking to our athletes, taking pictures, connecting with families and much more. The energy was infectious but I was exhausted by 10:30, leaving for the Placid Pub for a final beer before returning to see our final finisher, Terra, make it under the 17-hour mark.

All in, Ironman®  Lake Placid was another exceptional day. Congrats to all the athletes, thanks to all the volunteers and families and we hope to see you next year. In 2015, Lake Placid will be one of our Key Races, where we strive to get 100 members racing.

Remember you can Become a Team Member, and find out if we can help you have the race you deserve. Thanks for reading and see you in 2015!