Endurance Nation has a long history on the Ironman® Coeur d’Alene course: Coach Rich raced the event in ’03, ’05, and ’08, with a PR of 10:02, has been on hand for the race pretty much every year, and has coached hundreds to the Coeur d’Alene finish line. Coach Patrick raced Coeur d’Alene in ’08, finishing in 10:04. Finally TeamEN has had 18 to 35 athletes at the race every years since 2008.

We’d like to share that experience with you with these consolidated tips and resources specific to the Coeur d’Alene course:

In our opinion, Coeur d’Alene has seen some of the most variable of any US Ironman® course — frigid waters for the swim, cold, overcast, rain, heat and wind on the bike, and temps in the 90’s on the run. In short, you need to be prepared, and adapted, to race in any conditions.

That said, don’t sweat the weather report until about Friday of race week. Again, we’ve seen the weather change dramatically in the last fews days before the race and the forecast for Sunday won’t be accurate until Saturday morning. Likewise, the lake temperature changes very quickly so don’t think too much about it until, again, about Friday of race week. In 2008 the water was about 54°F for our practice swim on Wednesday (VERY cold!) but had warmed up a bit to 58°F or 59°F by Sunday.

Timing of the Event

The timing of an event should the #1 criteria you use for selecting what Ironman® to train for and race — not hills, not weather, not water temperature, but does rather the timing of the event work for you.

Will you have cooperative weather and hours of daylight available for training, especially in the last 8-10wks of your work up?

Do not underestimate the challenges of long, long rides on the trainer necessitated by choosing a sub-optimal combination of race date and your typical weather conditions in your final workup.

So the combination of the variable weather and the June date of the race means that you need to have time to acclimate to the heat, in the event CDA serves up a hot day. And hours of daylight and getting in the bike miles are a concern beginning around early April, when your training begins to ramp up. Below are our notes on how all of this shakes out for US-based athletes:

Travel costs and logistics: CDA is about a 35 minute drive from Spokane, WA, so lots of flights are available.

Lodging: ALL hotels in the area are booked (HoopsFest + Coeur d’Alene) and rates are jacked up a bit (or a lot) in CDA. Rich has often been able to book a more affordable hotel in Spokane and drive 30′ each way to the race.

Parking: rather than drive around and around trying to find a spot on the street, just park at the large resort / city lot downtown. The parking rates are very affordable relative to big city rates.

Dining: lots of options to suit just about anyone. Be sure to visit Java on Sherman for the Mexican chocolate mocha!

Now, let’s get on with the race!

Practice Swims: the course won’t be setup until Saturday afternoon. You’ll be able to swim in the lake before race day but not straight out along where the swim course will be — Coeur d’Alene has a lot of boating traffic so best to swim parallel to the shore. We recommend you enter the water and swim out from shore about 200-300m, picking up landmarks for navigation on the opposite shore. Then bang a right, swim, flip it and come back. It’s more important that you get a feel for the water temp conditions.

The Swim Start: from 2003 to 2011, the Coeur d’Alene swim start had gained a reputation for being one of the roughest in the sport. With nearly 3000 athletes all jammed into a narrow beach with an 800m swim to the first turn, there was a LOT of contact. However, WTC announced a new swim start protocol for the 2013 race, which produced a much safer and tamer Coeur d’Alene swim experience.

The Course: the Coeur d’Alene swim is a two loop affair in a lake, from a beach start. You’ll swim directly out from shore about 800m, turn left and swim about 150m, turn left again and swim back to shore. Exit the water, run over a timing mat, run/swim diagonally out to the first buoy, repeat.

The Temps: the water temperature has been very cold, from the high 50’s to the very low 60’s for a number of years. We recommend bringing a full wetsuit (duh!!) and a neoprene cap. Some athletes opt to wear booties, if the race allows them.

Coeur d’Alene has one of the nicest and fastest transitions in the sport. No crazy long run from the lake, up a street and into a skating rink (IMLP), no ludicrous long run up a parking garage helix and then to your bike (IMWI). Nope! Instead, your bags are outside on tennis courts, your bike is racked on shaded grass, and everything is only a few yards from the swim finish!

Introduced in 2012, this is the 3rd permutation of the Coeur d’Alene bike course. This is our breakdown of the course, how to ride it and what mistakes to avoid, as a description of one lap of the course: 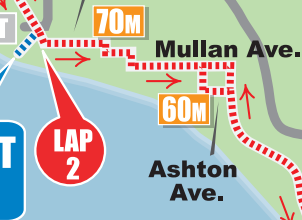 admin, with lots of turns and traffic getting you out to the lake and the out and back. IGNORE the crit-style racing of others, be safe and just get out to the lake.

Same drill when you come back into town at the end of the lake out and back, but you’ll be going fast down a gradual downhill with a LOT of spectators on the side who may not be looking at you. Keep your head on a swivel and look out for an inattentive spectator crossing in front of you. 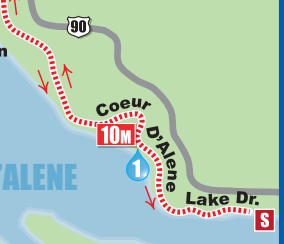 If you reference the bike course profile here, you’ll see there are a couple rollers here really nothing of note. That said, athletes who are caught up in the excitement of the race tend to drill it up the hill at about mile 6 — the same hill you’ll be climbing on the run at the far end of the late.

Just sit down, relax, ride easy and ignore the hammerheads around you. In our opinion, this about 20 mile section (admin + lake out and back + out to the first climb), which you’ll do two times = about 40 miles, are essentially free, in that there’s really nothing to be concerned or worried about. Just ride steady, ride your race, and ignore the other athletes around you.

Finally, note that Bike Special Needs will be in the culdesac/turn around at the far end of the lake. This is about mile 64 or 65, NOT mile 56, so plan accordingly.

After about 16 “free” miles you’ll turn south on Hwy 95 for about 2 more flat miles before hitting your first true climb of the day. After a short and fast descent note that climb less steeply up into a plateau, into another hill, down, another hill, flip it and come back.

Our notes for this section:

2012 was the second version of the run course and remains the same for this year. The race eliminated the flat, shaded, 2 mile out and back along the lake out of transition and extended the course into the hills on the far end of the lake. 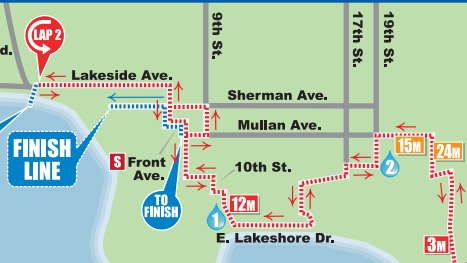 The Lake Out and Back:

It’s best to talk about this section by looking at the run elevation profile below.

Note that you’ll turn right and be sorta-next to the lake at about mile 2.8. From this point,

Awesome! You’ll bang a left on Sherman, a four lane street blocked off for the race, and see the finish ahead. And don’t be surprised at what appears to be longest less-than-a-mile you’ve ever seen! You’ll have the first couple blocks to yourself and then the crowd and noise grows and grows. Enjoy and don’t forget to ham it up in the chute!

We’ve found race reports to be extremely effective tools to teach our athletes how to race: TeamEN post their race reports, as well as their race and race rehearsal plans, in our forums for peer review from their comrades. The result is a very rich, team-wide knowledge base of race execution tips and a culture of athletes helping athletes learn now to race better.

IRONMAN®  is a registered trademark of World Triathlon Corporation, is not affiliated with Endurance Nation®, and does not endorse or sponsor our products, materials or events.