Project Armstrong: Predicting the Effect of Lance’s Return to Triathlon 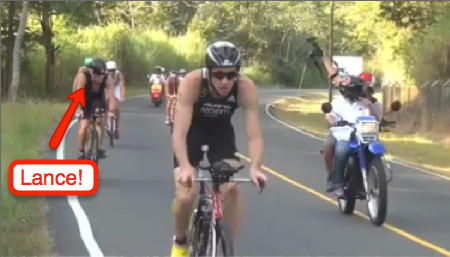 Unless you live under a rock, you’ve undoubtedly heard by now that Lance Armstrong had a successful return to long course triathlon this past weekend. He raced Panama 70.3® and he earned a second-place finish. It was a challenging bike course and extremely hot conditions. He rode within himself and was within the leading group, before running a solid 1:17 half marathon off the bike. In fact, he was only caught about a kilometer away from the finish. Not too shabby for someone in their 1st race as a pro. You can see some of the event coverage here.

In fact, Lance managed to outdistance many of the top US field. Granted it’s an early-season race, however it shows just how phenomenally fit he is. Whatever you might have thought about him as an athlete before this weekend, there is no denying that his presence will have a dynamic effect on every event he enters. The bigger question, however, is what effect will this participation have on our sport.

I predict there will be 3 major changes for our sports in the year 2012. I think all of them will be good, although it’s important to remember that with any change comes friction.

If this weekend was any indication, any event that has Lance Armstrong in it is going to receive significant media attention. And since he’s already announced his future race schedule, we are undoubtedly going to see even more focus in the coming months.

Of course all of this is for the good. His focus is on earning enough pro points to be able to race at Ironman® Hawaii, the world championships. Ironman® as an organization has already promised to donate several hundred thousand dollars to his foundation as part of a fundraising effort.

This is obviously a fantastic business decision as the brands and sponsors associated with Ironman, and the sport itself, will certainly benefit from this additional attention.

The question remains to be seen, however, whether or not Ironman® will be able to withstand the intense scrutiny of the international spotlight. As the saying goes, “there’s no such thing as bad PR,” common sense sometimes says otherwise.

There is no doubt that Ironman, and the other business entities that surround the triathlon space, will do their best to monetize the Lance effect. More news = more clicks = more page views = more revenue.

But the real money will come behind the scenes as hopefully larger brands will step in, driving new revenue into the sport. This influx of money could be used in a variety of ways. My hope is that the World Triathlon Corporation will invest this money in a way that sets a foundation for the growth of our sport. A great example would be improving pro athlete revenue, the basic infrastructure of which is already in place.

If this money isn’t used wisely, it’s entirely possible that the Lance effect will have a minimal impact on the long-term, sustainable future of our sport.

All that money aside, this is the one I’m really pulling for. Anybody who knows triathlon understands that this sport is driven by the beginner athlete. From spending money on equipment, to signing up for races, to travel and subscriptions, a lot of spending is driven by beginners. One needs to look no further than the resurgence of the “local” bike shop, many of which have been rejuvenated (and some saved!) by the growth of triathlon.

It’s my hope that Lance’s participation really helps to bring triathlon to the mainstream. I know that many of my fellow triathletes feel like our races are already too crowded. But the truth is, there are few other sports like triathlon where so many people can compete on a level playing field. I would argue that our sport is significant in that it’s just as much a lifestyle choice as it is a sporting choice.

With such a large percentage of our countries youth struggling with obesity and related health concerns, increased access to sports like triathlon will only help our collective future.

What Do You Think?

Here’s your chance to let the world know what you think about Lance’s return to triathlon. Please feel free to use the comments below outline what you think will happen now that Lance is a triathlete again. Please be civil!