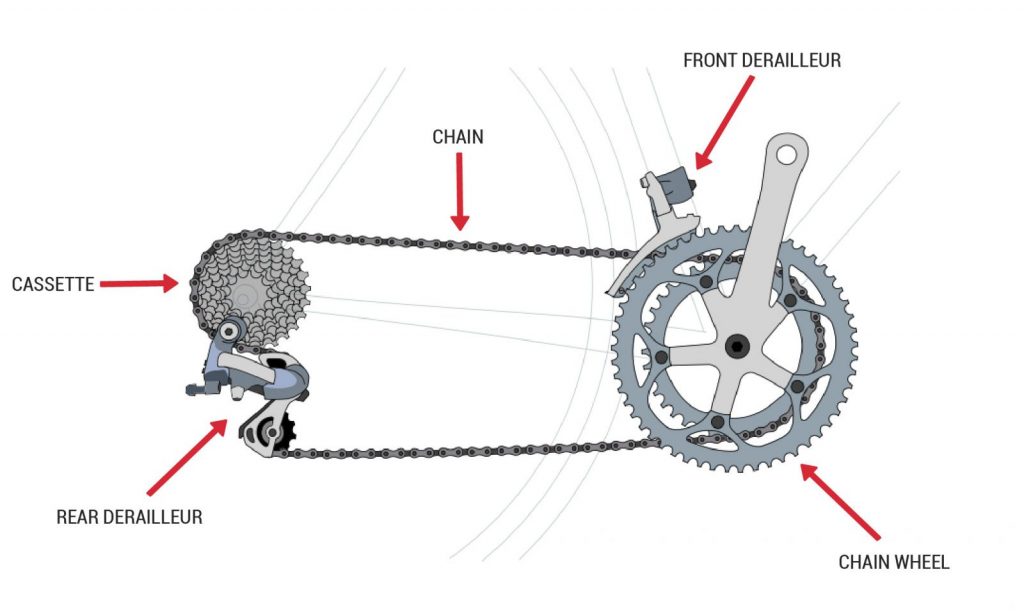 Gearing
“If I change the gearing on my bike I’ll get up the hill faster.”

This is not necessarily true. Think of your body and the muscles in your legs as the engine of a car. The gearing on your bike is the transmission that connects that engine to the rear wheel. Work is performed by the engine, is applied through the transmission (gears), and is measured at the rear wheel as watts. Watts are what turns the wheel of the bike and propel the bike/rider system up the hill, at a speed that’s determined via the watts per kilo of body weight discussion we covered in Part I of this series.

As a cyclist, think of watts as a function of:

If Timmy and Tommy are riding side by side at the same watts, but Timmy is riding at 60rpms while Tommy turns the pedals at 100 rpms, Timmy is pressing harder on the pedals with each pedal stroke. Note that while they are both performing the same work (watts) and are going up the hill at identical speeds (oh, Timmy and Tommy are identical twins with the same weight), how they experience/feel their equal work loads are likely very different, due to their different cadences. Let’s now discuss how cadence is related to watts and how this creates some unique conditions when climbing a hill.

Recall that watts is a function of cadence and how hard you press down on each pedal stroke. So if we keep power constant and decrease cadence (for example, staying in a big gear or running out of gears on a hill) we accomplish these watts by pushing harder with each pedal stroke. This “harder” is experienced as increased pressure on the soles of your feet as you pedal the bike.

Likewise, if we keep power constant and increase cadence, we accomplish these watts by pushing less hard on the pedals with each pedal stroke. This “less hard,” or “easier” is experienced as decreased pressure on the soles of your feet.

There are two important considerations to be aware of in these scenarios:

There are No Free Watts: while lower cadence may feel harder and high cadence may feel easier, if the watts of each effort are identical then your body is performing the same work load. Likewise, if your cadence is higher or lower and you find yourself going up the hill faster it’s important to realize that changing the gearing on your bike didn’t magically add watts to you or your bike. The only way you increase your ability to output more watts is to become more fit. But what has changed is your experience of these watts, as a change in pedal pressure and associated cadence. So a gearing change doesn’t make you faster, it simply changes how you experience the watts you produce.

The Dog on a Leash Effect: so given a choice between high and low cadence, which is better? I’d like to make you aware of what I call the Dog on a Leash Effect — as cadence decreases, at the bottom of a hill, for example, our natural tendency is to push harder against this increased resistance, much like a dog pulls against a leash, resulting in a spike in our power. It is very, very difficult for most riders to avoid this “push harder” phenomenon and it’s even more dangerous if it’s applied across the length of the entire hill because your bike is over-geared for the course. And it’s even more difficult when everyone else around you in a race is doing the same thing, spiking their power at the bottom of hills. So being focused on maintaining a higher cadence, especially at the bottom of climbs, is a good technique to avoid this nearly inevitable power spike as the Dog on a Leash Effect begins to express itself.

Finally, higher cadence cycling on hills is generally easier on the muscles of your legs, saving them for the run. But of these two scenarios, avoiding the power spike and easier on your legs, the former is more important to keep in mind. In my experience, if you’re climbing up a hill at low cadence you’re nearly guaranteed to be throwing out much higher wattage than you should.

Below are my recommendations, based on my experience as a triathlon coach, given the goal to have you run well off the bike. Within this stated context:

After reading this article I highly recommend running out to your bike and identifying what gearing you have your bike. I’ve seen far, far to many extremely poor gearing choices in my time observing triathlon races and it’s clear that many triathletes simply don’t know their gearing or how to change it. Changing your cassette is as easy as turning a bolt and YouTube is here to teach you how.

Join me shortly for Part III as I discuss the various flavors of perspective involved in climbing. Good luck!