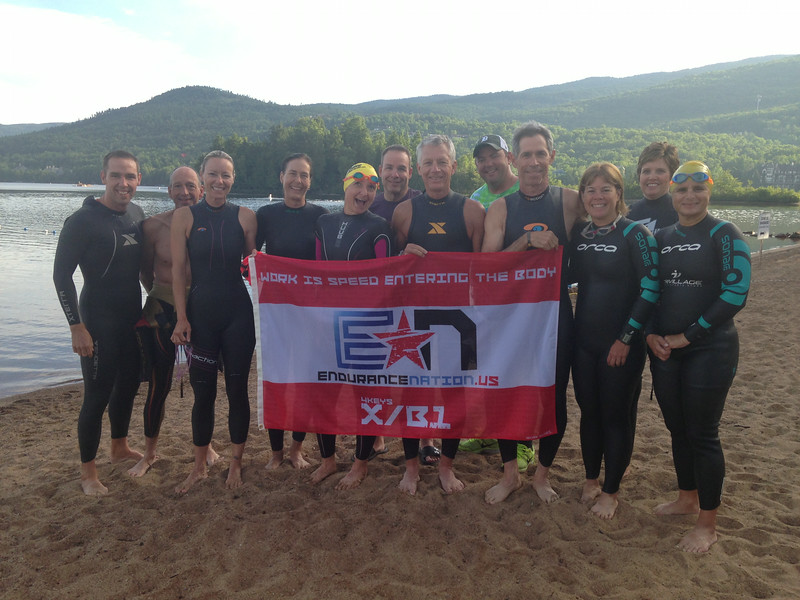 Another year, another new training camp. This weekend saw the Team in beautiful Mont Tremblant, Quebec, Canada to prepare for the full-distance triathlon, the 2014 Ironman® ® Mont Tremblant.  You can learn more about our training camps on the official Endurance Nation Camps Page. 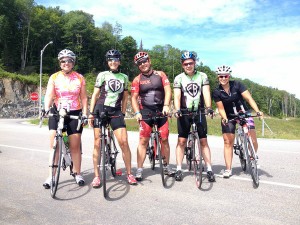 The goal of the first day is to get our first Race Rehearsal workout done. Typically this is 6 hours of cycling followed by 1 hour of running, but given we were on the race course, a full 112 miles was on the plan. We made some modifications thanks to input from our local members (thanks!) and we were ready.

The day started off perfectly, just like you read about. Cool temperatures and the beautifully maintained roads of the area. For many of us, it was our first go at the course and a real chance to see what our fitness felt like on the open road.

The first lap was fair, but after climbing the hills towards Lac Superior via Chemin Duplessis, the second lap felt much, much harder. By the time the bike was done, motivating for our run was one of the hardest mental things I have done in a long, long time.

We closed the day with a lecture on the bike course, including a review of the terrain, hill climbing tips and ideas for improved nutrition.

With the gorgeous lake a 5-minute walk from our hotel, we simply had to get in and swim. The water is gorgeous, and a 7AM start meant no boats whatsoever. The only people we saw out there were the crew from Epicman who were on their own day two of training!

After the swim it’s time to return to the scene of the crime in order to really build character and fitness. If Day One is about fitness, Day Two is about skills, strategy….and…suffering. There is no hiding from the terrain; you _must_ ride it properly or pay the price.

While everyone committed to riding smarter, the day had other plans in store for us. Some got too many flats, others opted for a shorter ride with two trips on the hills…and those of us who went the full distance had to deal with some serious wind. Nothing crazy, but enough to make the second lap of the day…and fourth of the weekend…feel pretty darn difficult. 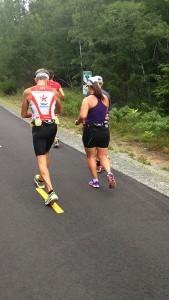 After our experience on the bike, everyone was looking forward to a day of no cycling…even if that meant running long. Thankfully the course is really well laid out, with some hills to keep you focused and some super quiet time on a newly paved path.

As you can see from the picture above, conditions were great. You can’t tell how humid it was, and you also can’t see any of the six, count’em SIX!, deer that I saw on my run…but take my word for it that it was gorgeous.

The finally tally for the weekend? 2 miles of swimming, 224 miles of cycling, 20+ miles of running, a few beers and the obligatory helping of poutine. Epic!

If you’d like to find a training camp for your next full-distance triathlon, check out the official training camps page here.