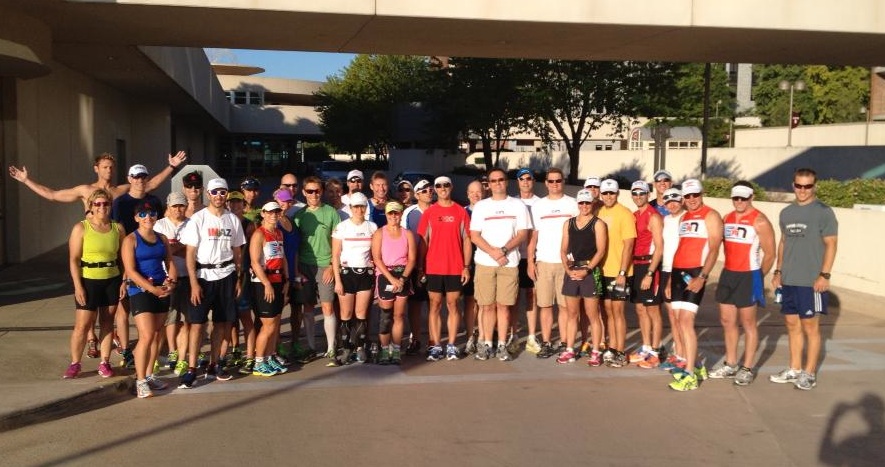 Coach Rich Strauss conducted a three day training camp, August 1 through 4, on the Ironman® Wisconsin course for TeamEN members and fans racing IMWI. Rich has raced Wisconsin three times, with a Kona qualifying PR of 10:05, has coached hundreds to the event, and 2013 was his 8th training camp in Madison.

The following is his recap of the camp, to give you a better idea of the value we provide for our members and training camp participants:

Day One: The Four Keys of Ironman® Execution, Wisconsin Version

Rich began the camp with our Four Keys of Race Executiontalk and then delivered a very detailed, mile by mile breakdown of the Ironman® Wisconsin bike course, based on his extensive experience with the course. In particular, Rich focuses the campers on learning how to ride steady and conserve energy and momentum on such a hilly bike course, identifying for them key sections of the course to take into consideration.

The campers assembled early in the morning for a “race rehearsal brick,” of 108 miles followed by 30-50 minute run. Athletes are encouraged to ride as they would on race day, with the lessons and perspectives of Thursday evening’s discussion in their heads.

The evening’s discussion sessions were then:

Day Three: Race Rehearsal Brick #2, Debrief #2, Ironman® Training for the Self-Coached Athlete, and Training and Racing with Power and Pace

The campers clipped in again for a repeat of Friday’s race rehearsal, but this time with a solid 48hrs plus of Ironman® execution goodness rattling around in their heads. Most campers opted for a shorter day, choosing to either focus their time on the Loop, or riding Stick > Loop > Stick. However, Saturday adds a valuable learning component — being surrounded by other athletes on the course, with other coached squads and training camps, 90% of whom are riding the course incorrectly. These athletes provided a powerful reinforcement of the lessons they had learned in the camp so far.

Next, we moved the party over to Gray’s Tied House in Verona for the camp dinner, a great opportunity to connect with fellow campers in a less formal, more intimate setting.

Sunday, Funday! We met down at the swim start area for a very early 6am swim in Lake Monona. Rich then led the campers through a walkthru of the transition area and tips for negotiating the longest transition on the US Ironman® circuit. Finally, Rich joined the campers for a run on the Wisconsin course, as an opportunity for them to apply and practice our Ironman® run pacing guidance.

Why You Should Join Us for Our Next Ironman® Training Camp

Rich and Patrick have over 25 Ironman® finishes between them, including five times at Kona. They were on hand at every US Ironman® race every year to coach their squads from 2004 to 2011. Endurance Nation has had over 1,000 Ironman® finishers every year since 2010.

The intent of these camps is to then bring the campers several years, and wasted races, up the learning curve by teaching them these race-specific Ironman® execution tips and tools, and how to race every inch of specific courses.

We challenge you to find a better combination of course-specific Ironman® execution learning and training experience in the triathlon space. Over 1,000 athletes have attended our camps on various Ironman® courses over the years. We hope you decide to join us!

TeamEN members save BIG on our camps! Become a Team Member.